This Q & A interview  with the 14th district's new police captain has been lightly edited for clarity and readability.

Captain Austin Fraser spoke with the Local about his 26-year history with the Philadelphia Police Department, what it's like to be a police officer in a time when trust in police is decreasing and how the city’s homicide problem is affecting its ability to combat crime.

This Q & A interview  with the 14th district's new police captain has been lightly edited for clarity and readability. 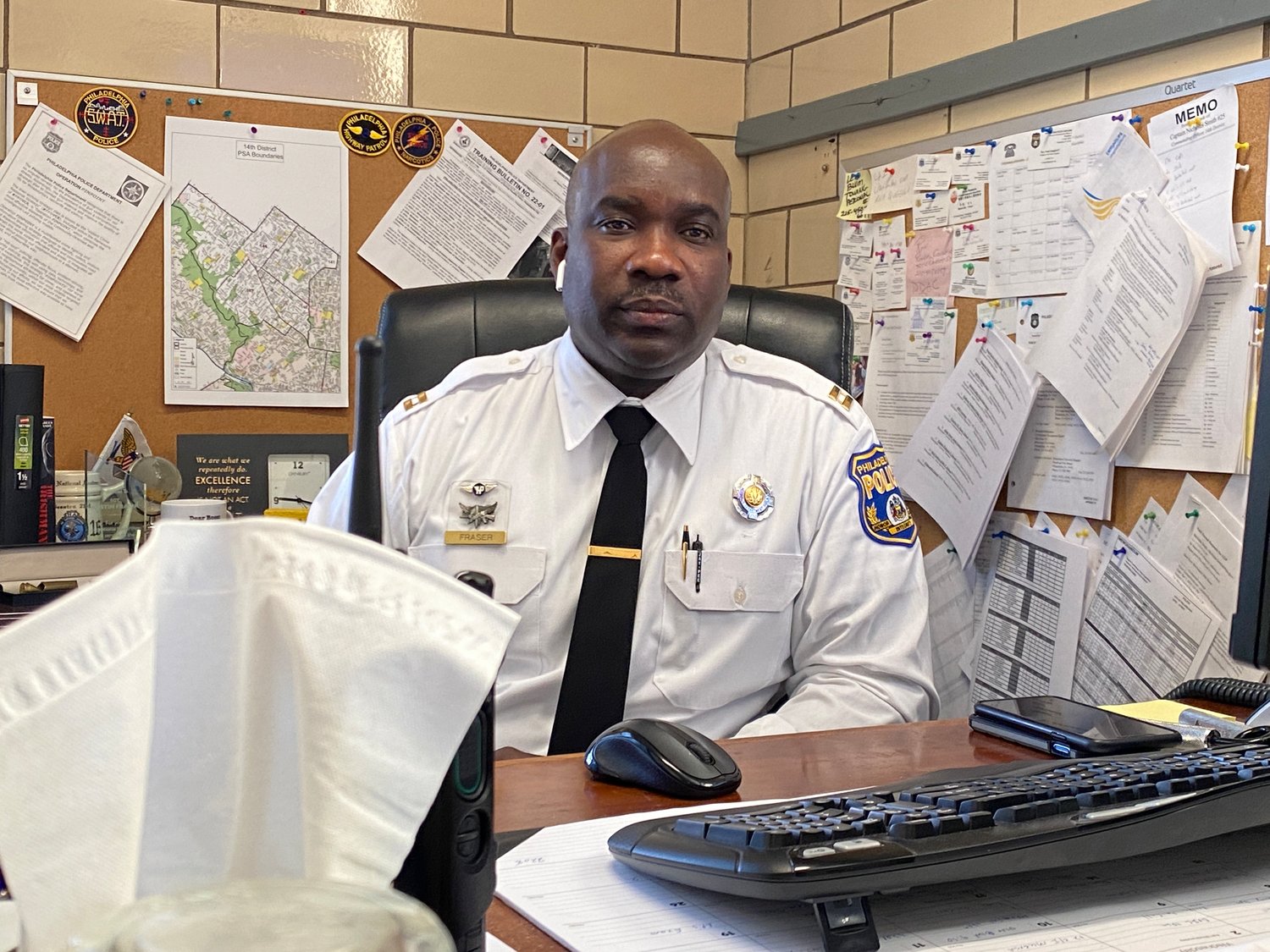 This is a noble occupation. A lot of the things [people] may have seen or heard in the news are not true. And a lot of stuff is misinterpreted.”
Police Captain Austin Fraser
by Tom Beck

Austin Fraser stepped into his new position as captain of Philadelphia’s 14th police district, which includes not only Chestnut Hill and Mt. Airy, but also Germantown, Stenton and parts of West Oak Lane, back in mid-December. Right away he knew this job was “totally different.”

Fraser came to the district from the department’s Real Time Crime Center, a division of the police Intelligence Bureau. There, he worked to create a safer Philadelphia using data and other information.

At the 14th District, he’s working to make the city safer - just with a more hands-on approach.

He spoke with the Local about his 26-year history with the Philadelphia Police Department, what it's like to be a police officer in a time when trust in police is decreasing and how the city’s homicide problem is affecting its ability to combat crime.

How are you liking the 14th District so far? It's been what, three months?

It's good. It's a nice place. There's a lot of diversity. A lot to learn, a lot of interesting facts about the district and I have a great group of cops here. So, you know, there's nothing not to like.

Tell me a little bit about your history. How long have you been in policing?

I've been in the police department for 26 years. Over those years, I've enjoyed a number of different assignments. I started off in the 26th district, which is in the East Division. Lower Port Richmond, Lower Kensington area. I worked in West Philly, I worked in North Philly and now I'm in the Northwest.

What made you want to do this line of work?

It might seem like an overused term, but I actually thought that I would be helpful to the community. I envisioned [setting] an example for kids. I figured if kids were able to see me - I was 24 years old at the time - holding a good job, where I could go out and make a difference, that it would encourage some kids to become police officers. But mostly, I wanted to try and encourage kids to stay out of trouble.

How has the job changed in 26 years?

It has changed drastically. We’ve made a lot of improvements within our department. I think [that is] something that's been overlooked. When things were going on around the country two years ago [regarding the public response to the killing of George Floyd], nobody highlighted the fact that our department was already in the process of making positive changes.

If you don't have people out there to serve you, then you don't get the service that you expect.

Trust in the police has decreased, with young people and African Americans being among the most disaffected. You've already touched on it, but why do you think that trust went away and how do you gain it back?

I think [that trust] going away was unwarranted because I think our department was already moving in the right direction. We were working toward improving our credibility in the community. And I think the issue now [is that] the people who were standing up on the pedestals and villainizing us - these are the people who need to come clean and not just help cops do their job, but partner with us and help us talk to the youth of the community to keep them on the right track and keep them out of violence.

What would you say to people who might be considering a job with the Philadelphia Police Department? What would you do to encourage them to apply?

I could just reiterate the truth. This is a noble occupation. A lot of the things they may have seen or heard in the news are not true. And a lot of stuff is misinterpreted. I would try to tell people that the pendulum will swing. People are going to begin to realize that all the rhetoric they've heard the last two years is not true.

We are going to start to shine again. We continue to do the work and we continue to serve the community. We're covered in dirt right now, but we're going to get polished off and this is an opportunity to jump in on the ground floor and help us to move forward as we regain our stature in society.

When you see videos of police officers behaving in ways that are detrimental to the community, for instance what happened to George Floyd, what is your reaction to that?

Well I can tell you right now, I was angry. That never should have happened and there was no reason for it.

Twenty-six years ago when I went through the police academy, we were told never, never to use a chokehold on somebody. The Philadelphia Police Department in the last 26 years has never taught the use of  chokeholds. And that's something that should have been said to the public so they understand we don't do that.

But the rhetoric was that every cop uses chokeholds. It was really never an issue in Philadelphia.

It puts us in a bad light.. I can guarantee that every cop that I've spoken to since then -  to a person - feels the same way.

The issue with that is that as human beings, we all make mistakes. The problem now is that when somebody makes a mistake, everybody jumps on that person. It's like a dogpile on a rabbit. We don't take the opportunity to step back and look at the facts and figure out this person's intent. Somebody who intentionally does something wrong and somebody who makes a mistake are two different situations and we're supposed to treat them differently.

We don't do that anymore, and I think that's a huge problem. We should take a step back and see what the facts dictate first because everybody should have that opportunity for due process. If we go through all the facts and determine that somebody is a bad apple, we have no problem distancing ourselves from that person - not just the police department, but the police union as well.

The problem comes when [an officer is] convicted in the court of public opinion before all the facts are made clear. Sometimes you never really know who that person is before the resolution of the situation. I think that's a big problem that we need to start dealing with.

Last week you told me there were no police cameras in the Wissahickon parking lots because the camera infrastructure is dedicated to areas where there's violent crime. Does it seem like there aren't enough resources to get to the less-violent-but-still-serious crimes like smash and grabs?

What I would say is that there aren't enough resources to garner the immediate response that we’d like to give.

This camera program isn't new. The infrastructure for this was laid probably 15 years ago and they've been building it out over that time. Obviously it started in the most violent areas and we've been trying to expand it as we go along. That's still a focus of the crime camera program because we ideally are trying to keep people safe and we have to prioritize violence over other things, at least for the time being.

If we ever get control over the violence, then we can move on to focusing on other crimes. We encourage individuals, companies, civic groups, depending on what their resources are - if they're able to get camera systems installed, it's definitely something that assists us in investigations of any type.

What are some things you'd want our readers to know about you?

Really just one basic thing. That me and my officers are here to serve the community, we're going to give 110%. There might be situations where it might not seem that way because we officers tied up on a shooting. Somebody might call for something that is absolutely important to them, and it is important, but they don't get the five minute or the three minute response time because these officers may be dealing with somebody who's dying or has died.

But we're here to serve, we will get to you, we will be empathetic. If your readers feel there's an issue with one of my officers and their response, bring it to my attention. I'll definitely look into it. And I'll be honest, and as impartial as possible. Because, again, we're here for the community.