Representatives of Bowman Properties last week unveiled a plan that seeks to downsize, or in some cases eliminate, commercial space in Chestnut Hill in an effort to combat retail vacancies. 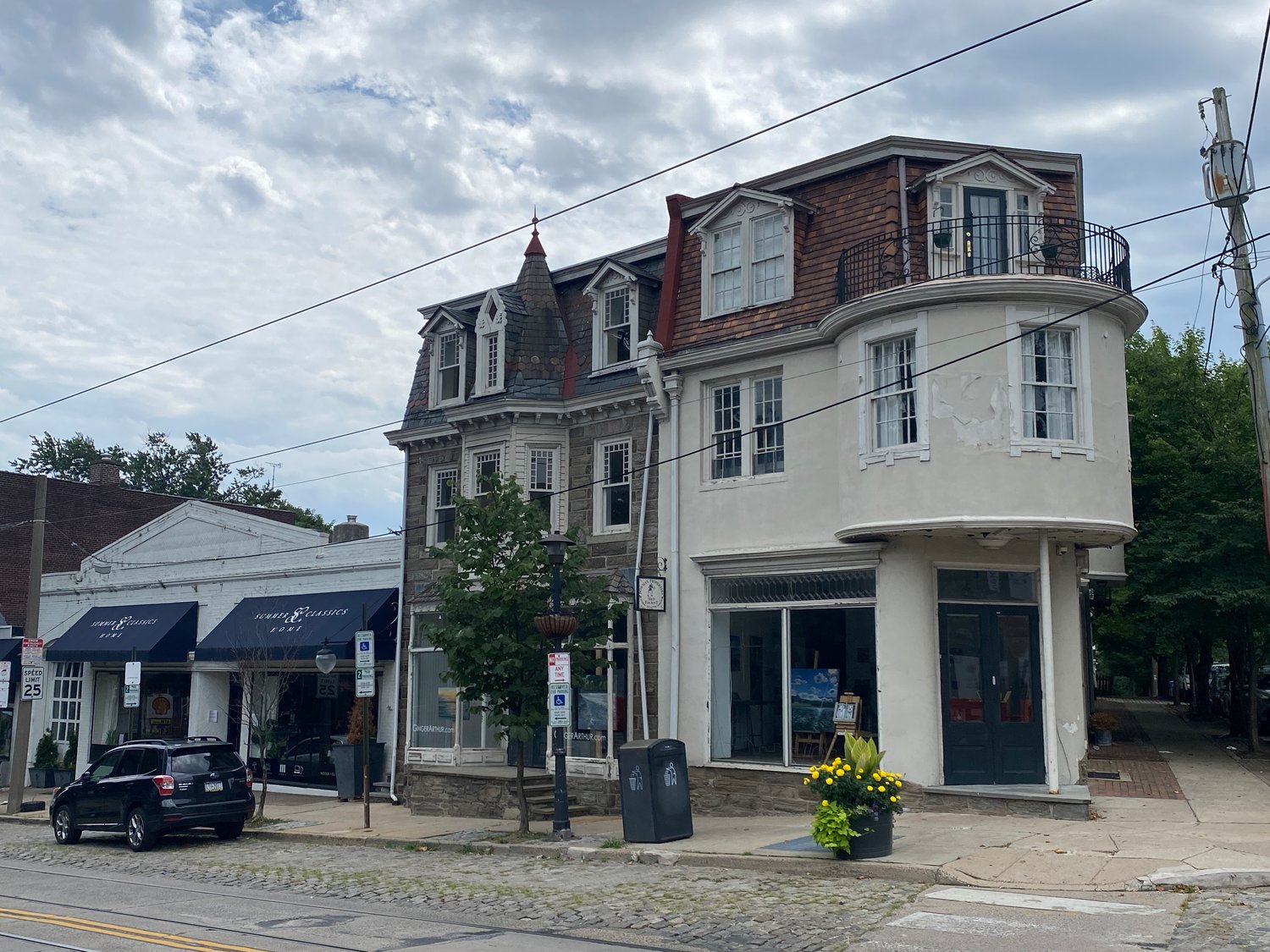 The former site of Under the Blue Moon, located at the corner of Germantown and Abington Avenues is one of five retail spaces Bowman seeks to downsize. 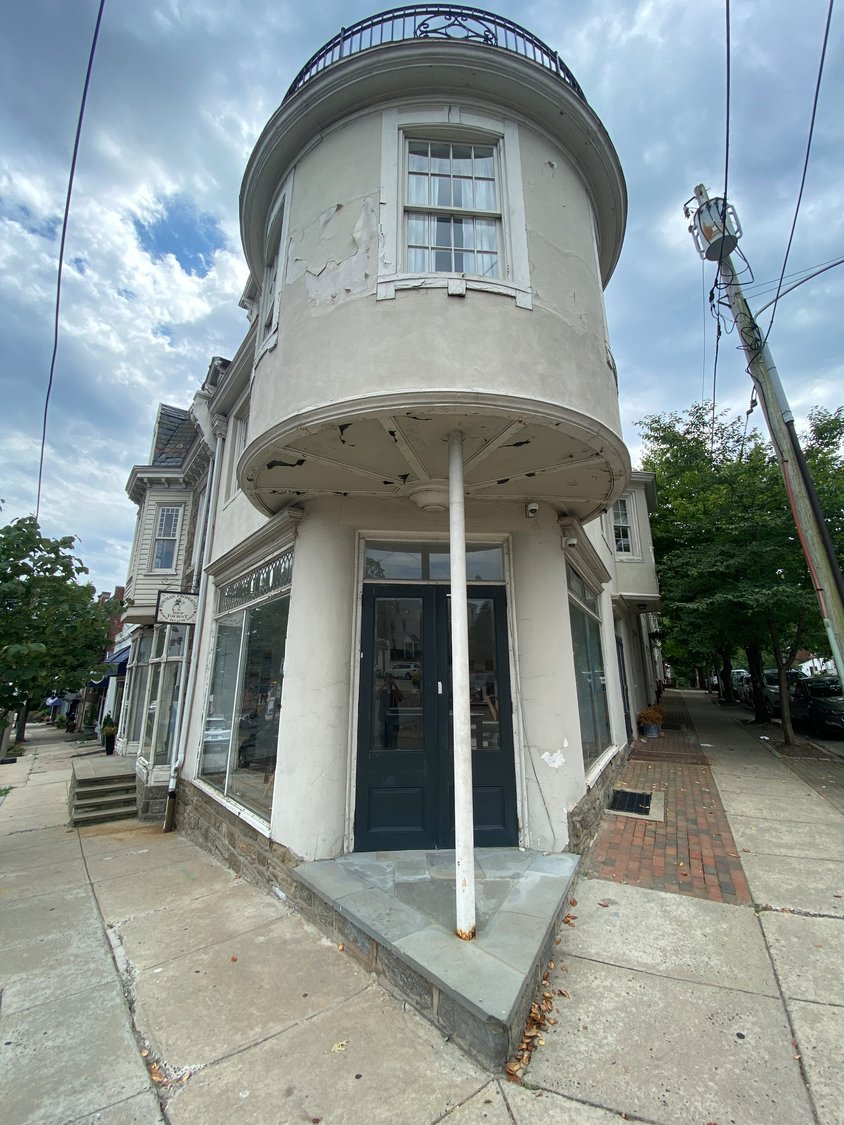 The former site of Under the Blue Moon, located at the corner of Germantown and Abington Avenues is one of five retail spaces Bowman seeks to downsize.
Previous Next
Posted Wednesday, July 27, 2022 12:00 am
by Tom Beck

Representatives of Bowman Properties last week unveiled a plan that seeks to downsize, or in some cases eliminate, commercial space in Chestnut Hill in an effort to combat retail vacancies within Chestnut Hill’s commercial corridor.

The plan includes seeking variances from the city zoning code to downsize the amount of retail space in five properties and completely eliminate commercial space in two. However, Bowman owner Richard Snowden said that no demolition or changes to the exteriors, including storefronts, would be implemented. Renovations would be made only on interior spaces.

“We are willing to enter into an agreement with the community association [saying] that this is the way that the project will be undertaken,” said Snowden at Tuesday’s Chestnut Hill Community Association zoning meeting. “There will be no demolition to the exteriors of these buildings in any way.”

Bowman’s plan to downsize retail spaces evoked a mixed reaction from Chestnut Hill stakeholders who attended Tuesday’s meeting, which was held via Zoom.

In a phone call after the meeting, Barbara Baumbach, chair of Chestnut Hill Business Improvement District and president of the George Woodward Company, said that she also supported Bowman’s variances, but with a caveat: the commercial spaces must be turned into “vanilla boxes” or “white boxes,” which are real estate terms for an almost ready-to-move-in, versatile commercial space set up with the most basic needs - including drywall, electric outlets, a ceiling and lighting - for a future tenant. A vanilla box functions as a blank canvas which can be customized by the occupant who decides to rent the space.

Baumbach called vanilla boxes the “industry standard” and that their implementation in Bowman’s properties should be “a condition of approval for the variance.”

“We want the reduced commercial spaces fitted as vanilla boxes,” Baumbach said. “I think that will reduce the vacancies.”

“If things aren’t renting, it’s one of three factors: price, condition or location,” he said. “Germantown Avenue in Chestnut Hill, location-wise, is pretty solid. If we’ve eliminated location, the problem is price or condition or both.”

Finally, at 8532 Germantown Avenue, Bowman seeks to shrink 1,768 square feet of commercial space to 535. That building is on the top of the Hill, on the corner of Germantown and Evergreen Avenue.

At two additional locations - 18 Hilltop Rd., located behind Cosimo’s Pizza Cafe near the Chestnut Hill West train station, and 10 E. Hartwell Ln., located at the corner of Germantown and Hartwell - Bowman seeks to eliminate commercial space entirely by converting them to residential.

The Chestnut Hill Business District’s retail recruiter, Ann Nevel, told the Local that downsizing retail space “could be a viable solution to getting those properties rented.

“My experience is that the preferred square footage for a commercial tenant depends entirely on the business and the business plan,” she said. “Smaller can be preferable to larger for certain desirable businesses.”

Developer Sanjiv Jain also went on the record in support of Bowman’s variances.

“If he says, with the smaller spaces he could have them occupied, that’s a huge win for everybody,” Jain told the Local. “Many of these spaces have gone three decades without tenants. If he says this would get them occupied, I take him at his word.”

At the meeting, Snowden resisted the idea of turning the spaces into vanilla boxes.

“When the tenant is identified, that's when we do the vanilla box,” he said. “It just doesn't make economic sense.”

For instance, Snowden said, the vacant space that formerly housed Under the Blue Moon is currently set up for a restaurant.

“All of the infrastructure is in there already - the wiring, the HVAC, all of that kind of stuff,” Snowden said. “The only thing that's not is drywall, and I'm not going to put up a drywall box to have a tenant come in and ask me to tear it all apart.”

“I disagree completely with the comment that a vanilla box is a mistake,” he said. “A vanilla box is a basic skeleton of the space, making it look clean and nice with solid infrastructure in place and can easily be adapted to anybody's use.”

Elfant also pushed back on Bowman’s variance plan due to what he called the “decrepit” state of some of his properties - particularly 7900-02 Germantown Avenue, which is not on Bowman’s list of variances, and the Under the Blue Moon building.

“I would like to see something done about that,” Elfant said. “If Richard wants approval on all these [variances], I think he has to commit in writing that he's going to [fix up his properties] and he's going to do them in a certain time frame.”

Snowden agreed with Elfant’s concerns about the state of some of his properties, but noted that the current labor shortage has made it difficult to make the necessary repairs.

“It's been tough the last three years to get contractors,” he said. “We hired four painters last week and I thought I'd hit the lottery. I'm picking up two carpenters this week, and it's like I hit the lottery again.”

In a follow up phone call, Elfant called Snowden’s answer “convenient,” given the recent labor shortages.

In a follow up phone call, Snowden said there were “two or three properties we need to do some work on,” while “many of them are in gorgeous condition and have been beautifully restored over the years.”

“To say all of our buildings are in terrible condition is a bunch of baloney,” Snowden added.

Nevel said while she’s heard complaints about Bowman’s rents being too high “the fact is that, of the prominent business leases that have been signed since I began as retail advocate in October 2021, three…are Bowman properties.”

“In my experience,” she continued. “Bowman has worked doggedly, flexibly and creatively with desirable prospects to generate signed leases.”

Baumbach said she hoped Snowden would “negotiate with any viable prospect to fill a vacancy.”

Nevel told the Local that vacancies have historically been more of an issue at the bottom of the Hill due to a decreased amount of foot traffic, but she is optimistic that could change as a few new businesses are slated to open in that area.

“We expect that these new businesses as well as other initiatives that focus on the Lower Hill, will help to attract additional desirable and exciting tenants to the commercial spaces there,” Nevel said.

Back in November, city spokesperson Paul Chrystie told the Local that the underperforming retail market is hurting other commercial corridors in the city and the issue is “not unique to Chestnut Hill.” He said there’s no hard data to document trends of retail vacancy in the city, but noted that “the continued expansion of e-commerce and the effects of the COVID pandemic” are having an impact.

At the meeting, Snowden compared the insides of these buildings to stage sets because they can always be converted back to their original sizes if demand calls for it.

“It's not as though we're removing the back of any of these buildings and the space is going to disappear,” he said. “The space will be there. And certainly if 20 years from now, we go into another nirvana of retail that was the last quarter of the 20th century, it would be economically feasible to do something different.”