At first, the tree was carried up the winding steps inside the home of Richard Snowden to the platform that serves as the developer’s terrace. Today it's an annual, and bigger, tradition. 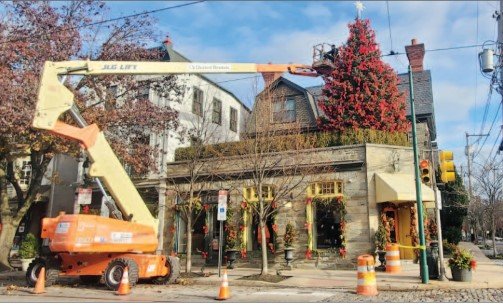 Eric Graber and his crew use an orange boom lift to string the lights and position the red bows, with holiday music playing during the decorating. 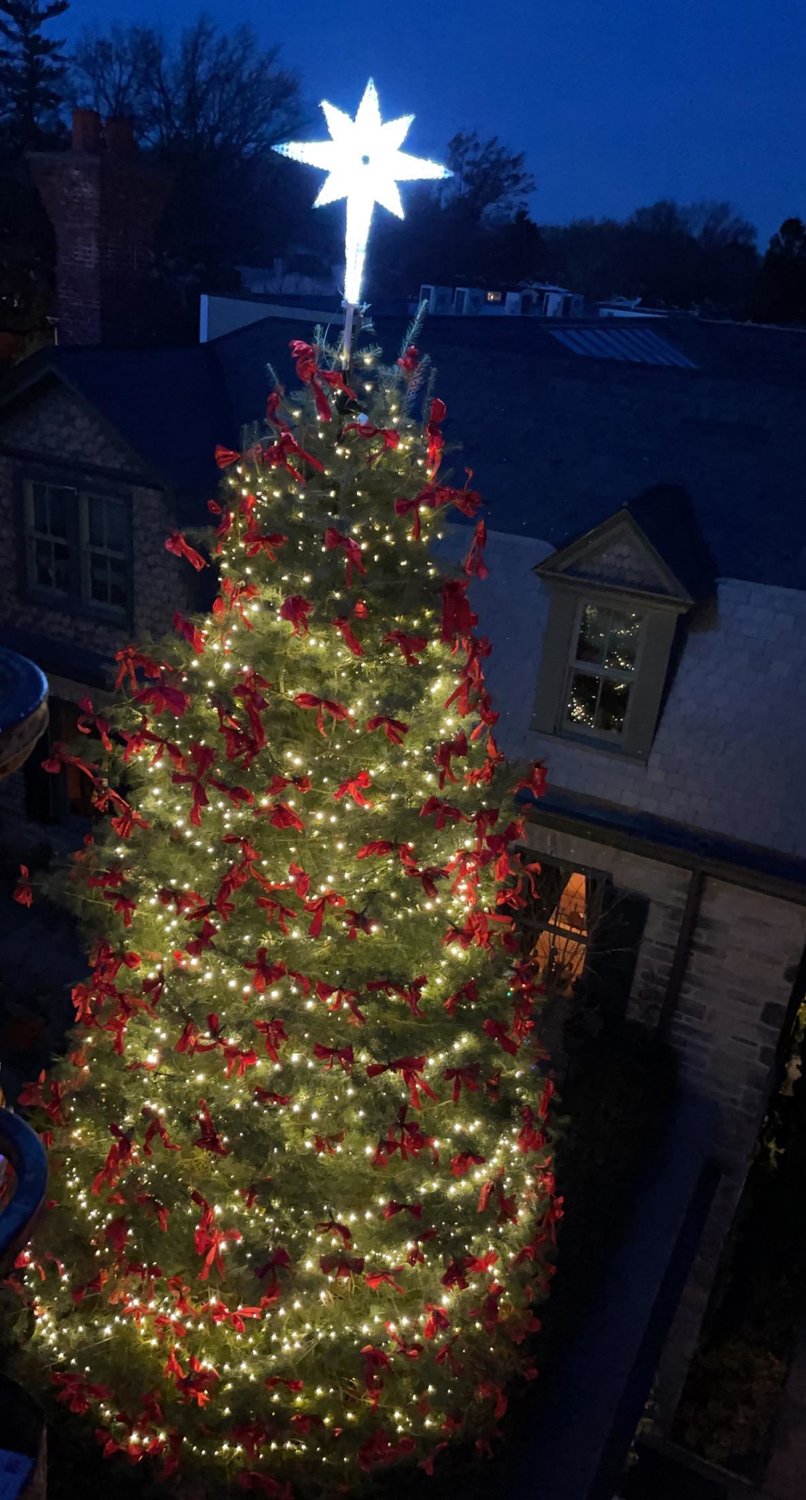 The tree above Germantown Avenue and Gravers Lane is lit every night at about 4:45 p.m. and goes dark at 1 a.m. 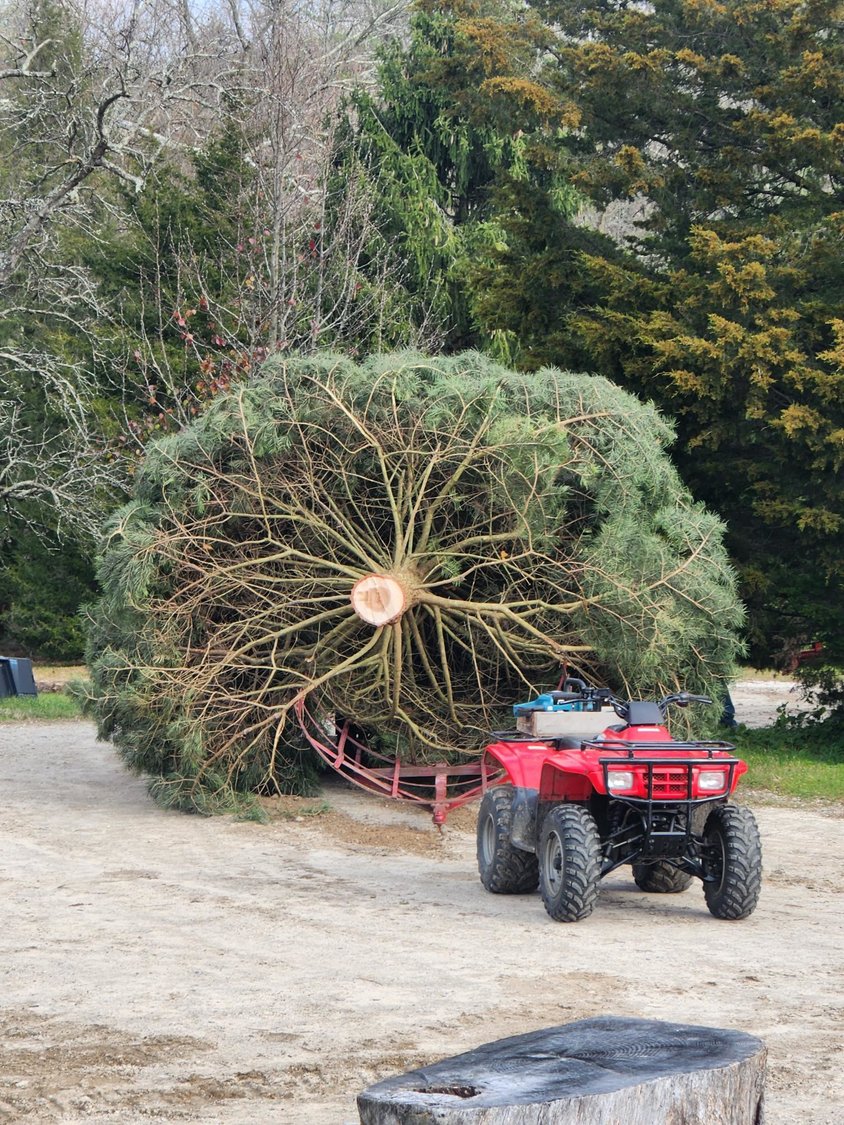 At first, the tree was carried up the winding steps inside the home of Richard Snowden to the platform that serves as the developer’s terrace and the roof of the J.McLaughlin boutique.

A scant seven feet tall, the tree, a dose of holiday spirit for a hardworking construction crew, was only partially visible from the street below.

But eventually, a friendly gesture of thanks morphed into an annual tradition, and a Christmas inspiration for a few evolved into a towering symbol of the holidays for an entire community.

The tree that now soars above a corner of Germantown Avenue and Gravers Lane has become a marker of holidays on the Hill, visible to drivers searching for that perfect parking space, shoppers strolling on Stag & Doe Night, and employees scurrying to work during the holiday season.

“It’s a big, bright, beautiful addition to the holiday decorations that line Germantown Avenue and part of what makes Chestnut Hill such a great place during the holidays,” said Anne McNiff, executive director of the Chestnut Hill Community Association.

This year, the Concolor Fir adorned in red bows and sparkling lights stands 26 feet tall, the tallest ever, and weighs about 800 pounds, so big in recent years that it’s had to be hoisted to the roof by a crane. It is a holiday decorating effort executed by a team that includes tree experts, skilled craftspeople and structural engineers.

“Initially it was for all the workers on the building’s renovation to just get everyone in the Christmas spirit and show appreciation for the hard work on the job,” said Eric “Mr. Christmas” Graber, lead carpenter for Snowden’s Bowman Properties.

But down below, a few passersby had taken notice.

“The next year, we weren’t planning on doing anything,” Snowden said, “and then somebody stopped me on the street and said, ‘Where’s the tree?’”

So he  dashed off to the Top of the Hill market and purchased one.

“Egged on by Graber,” Snowden said, every year, the tree got a little bigger, the lights a little brighter, and increasingly noticed by neighbors. When Top of the Hill market closed, the team began looking further afield for the tree. Now, the holiday mission starts every year in mid-November. Snowden and Graber travel to a Chester County farm to walk its scores of acres to find a tree with the kind of fullness, and densely positioned branches that will be a perfect setting for a display of 7,500 lights and hundreds of red bows.

“We go in the rain and snow,” Graber said. “They help us load it using a lift to drop it on a trailer. We strap it down and bind it in a tarp so we don’t lose needles when we go down the expressway.”

Once on the Avenue, the tree is hauled from the truck to the roof by a crane provided by Shechtman Tree Care, headquartered in Abington. The tree is set into place using wires and bolts that connect the tree to the bluestone building. Structural engineers Jay Rosen and his team at Se2 Engineering, based in Conshohocken, ensure that the tree is safely and securely erected.

It rests on a nearly six-foot stand, with a trunk that sits in 800 pounds of sand, on a terrace that is 15 to 20 feet above ground. Once straight and tall, the netting is removed, the branches fall into place and decorating starts. That means that Graber and assistants step into an orange boom lift to string the lights – untangling them, first. Next come the bows, an homage to Snowden’s grandmother Virginia Wilmsen who often decorated bushes outside her Wyndmoor home with red bows during the holidays.

Nelida Cruz and her team are on bow duty. Cruz hand ties new bows needed each year to replace those that are past their prime. This year, she made 200.

“I love it,” Cruz said. “I love the spirit of Christmas. It’s something special.”

After the five days of decorating that includes flanking the fir with two tall drummer boys, the tree is ready for its premiere. This year, on Stag & Doe Night’s first Wednesday, the tree was lit for the first time, starting a daily schedule set off by timers: on at about 4:45 p.m., twinkling to dark at 1 a.m.

The cost of this holiday endeavor is a mystery.

“Well, it wouldn’t be a Christmas present if I told people what it cost so I’m not going to say,” Snowden said. “I don't think my grandmother would approve.”

The tree will remain up until early January when Graber and his crew will begin taking it down - on the lift and using a chainsaw. The tree is dismantled piece by piece and then transported to a composting company where it returns to the earth.

“It’s always a little sad at the end,” Snowden said. “but it gives so much joy in the month or so that it's up. It’s a Merry Christmas [greeting] to the community, and in the spirit of this neighborhood.”