Springfield Township’s Board of Commissioners voted 5-2 to ban employees from displaying the flag on township property while on duty. It also bans off-duty display if they’re wearing a township work uniform. 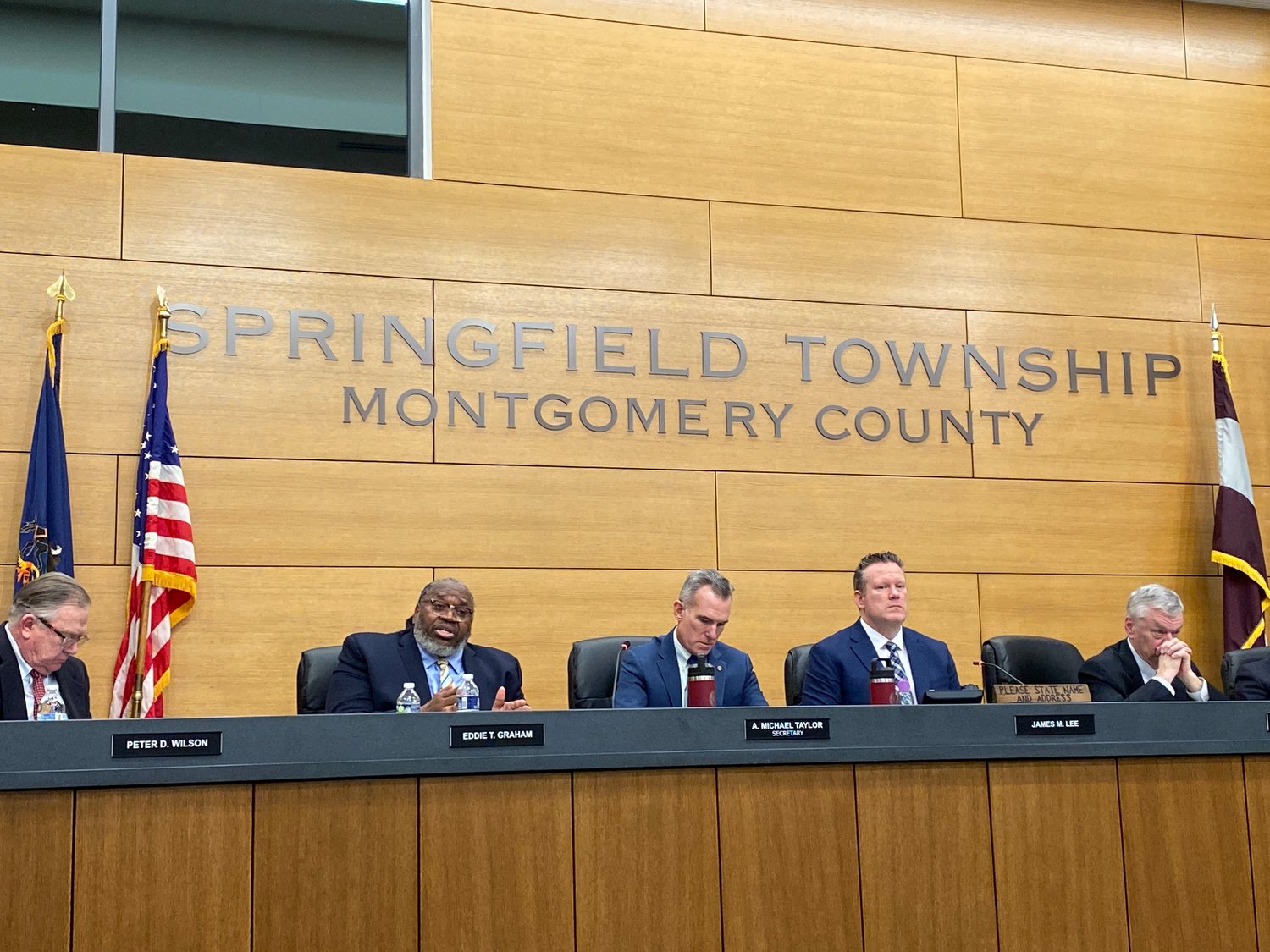 Springfield Township Commissioners including the board's former chairman Eddie Graham (second from left) discuss a resolution that bans the municipality's employees from displaying the Blue Lives Matter flag while on duty.
Photo by Tom Beck
Posted Wednesday, January 18, 2023 12:00 am
by Tom Beck

Springfield Township’s debate over the Blue Lives Matter flag, which is incorporated into the logo of its police officers’ labor union, came to a head Wednesday night when the township’s Board of Commissioners voted 5-2 in favor of a resolution that bans township employees from displaying the flag on township property while on duty. It also bans township employees from displaying the flag while off-duty if they’re still wearing a township work uniform.

“This resolution only seeks to clarify and codify what is mostly already in practice, and that as a government body we are sensitive to the controversial nature of this specific symbolism, and how it is viewed as harmful by residents in our community,” said board president Jim Lee. “Therefore it is not appropriate to be on display representing the township.”

The resolution has raised concerns over First Amendment rights, and the vote came despite the complaints of detractors who dismissed it as “redundant” since the township already has mandated uniforms that do not include the Blue Lives Matter flag.

The PBA’s logo first landed the organization in hot water with the township’s board in October 2021 when Commissioner Eddie Graham, who is the first Black commissioner in the township’s history, saw it flying on a banner while driving in Wyndmoor. He complained, as did many other residents at a series of heated township meetings. Wednesday’s resolution comes after repeated attempts by the board to get the union, the Springfield Township Police Benevolent Association, or PBA, to voluntarily change its logo. The PBA has repeatedly refused to do so.

“It seems redundant to me that we've already got regulations that are being followed and the emblem isn't being worn or displayed on township property or uniforms,” resident John Bleeker.

Commissioner Baird Standish, who along with Commissioners Lee, Graham, Susana Ratsavong and Peter Wilson voted in favor of the bill, argued that the resolution was important anyway.

“It's maybe redundant,” Standish said, “but it does send a message to the people who are impacted, and people that we care about, and it's a message that says 'We care about you.' And I think as commissioners, as government leaders, that's what we're up here to try to do.”

Standish acknowledged that supporters of the logo aren’t necessarily racist. But whatever the intent of the people who want to display it, he said, It has a specific meaning and impact in minority communities, and that matters.

“At this moment, it is clear that the intent of the Springfield Township PBA is not malicious or racist,” he said. “But the impact, however, has landed on many community members as divisive, disrespectful and racist.”

As in past meetings, all commissioners who spoke in favor of the resolution spoke at length about their support for township police. The resolution, they argued, was not meant to be an attack on police, rather a message of inclusion towards the township’s minority groups.

Graham resigned as the board’s president in October, citing the “white fragility” of many township residents.

Commissioners Mike Maxwell and Jonathan Cobb both voted against the resolution. Neither spoke at length about their decision to vote against the legislation on Wednesday night, but Cobb earlier had called the resolution a “very heavy-handed measure that does seem to be very punitive, directed at a very specific issue that I don't think adds any value to debate.”

Maxwell, in April, said that while he understood the flag was “upsetting” to certain residents, “the Springfield Township Police Department is not like that.”

It’s unclear whether the Springfield Township Police Department is concerned about the PBA’s logo undermining its ability to maintain public trust. The Local has repeatedly reached out via phone to the police department’s chief, Michael Pitkow, to discuss the matter. Each time, a message is left with Pitkow’s secretary, but the Local has never received a call back. The Local has also sent repeated emails to the PBA requesting comment, but has never received a response.

Springfield resident Drew Hines was one of several people at the public meeting who argued that the resolution doesn’t violate the First Amendment.

Michael Gottlieb doesn’t see it that way. Gottlieb, a lawyer who testified before the board on Wednesday and said he represents police officers throughout Montgomery County, called the resolution unconstitutional.

“This violates the First Amendment,” he said. “Your resolution is a waste of everybody's time here.”

But Melissa Melewsky, an expert on First Amendment issues who serves as in-house counsel for the Pennsylvania NewsMedia Association, came down more on the side of Hines than Gottlieb. Governments have the ability to regulate the speech of their employees when that speech has an impact on their job, she said in a phone interview with the Local.

“Public employees have a somewhat diminished First Amendment right on the job,” she explained. “If the township believes that in this case the logo negatively impacts these employees’ ability to do their job effectively, they may be able to implement a rule regulating that kind of speech.”

Melewsky pointed to a 1983 Supreme Court case, Connick v. Myers, in which New Orleans District Attorney Harry Connick Sr. fired a subordinate assistant district attorney, Sheila Myers, after learning that she distributed a survey to fellow employees questioning various policies in the District Attorney’s office. Myers sued, alleging a violation of her free-speech rights. But the court voted 5-4 in favor of Connick.

But, Melewsky said, Connick v. Myers isn’t completely analogous to the situation in Springfield Township, and it’s not clear that a court would necessarily agree with her. If sued, she said, the township would have to prove that the logo is preventing township employees - police officers, in this case - from doing their jobs effectively.

“Ultimately this issue would have to be litigated to get a firm answer from the court,” she said. “Anytime you have government regulating the content of speech, it will be a First Amendment issue. The question is whether it’s an allowable regulation of speech, and there’s not a bright line test here.”