Traditions for the modern world at Duke's Barber shop

Brown, who opened Duke Barber eight years ago, offers what he calls “classic traditions in a modern world” to a customer base that includes women as well as men.

Traditions for the modern world at Duke's Barber shop 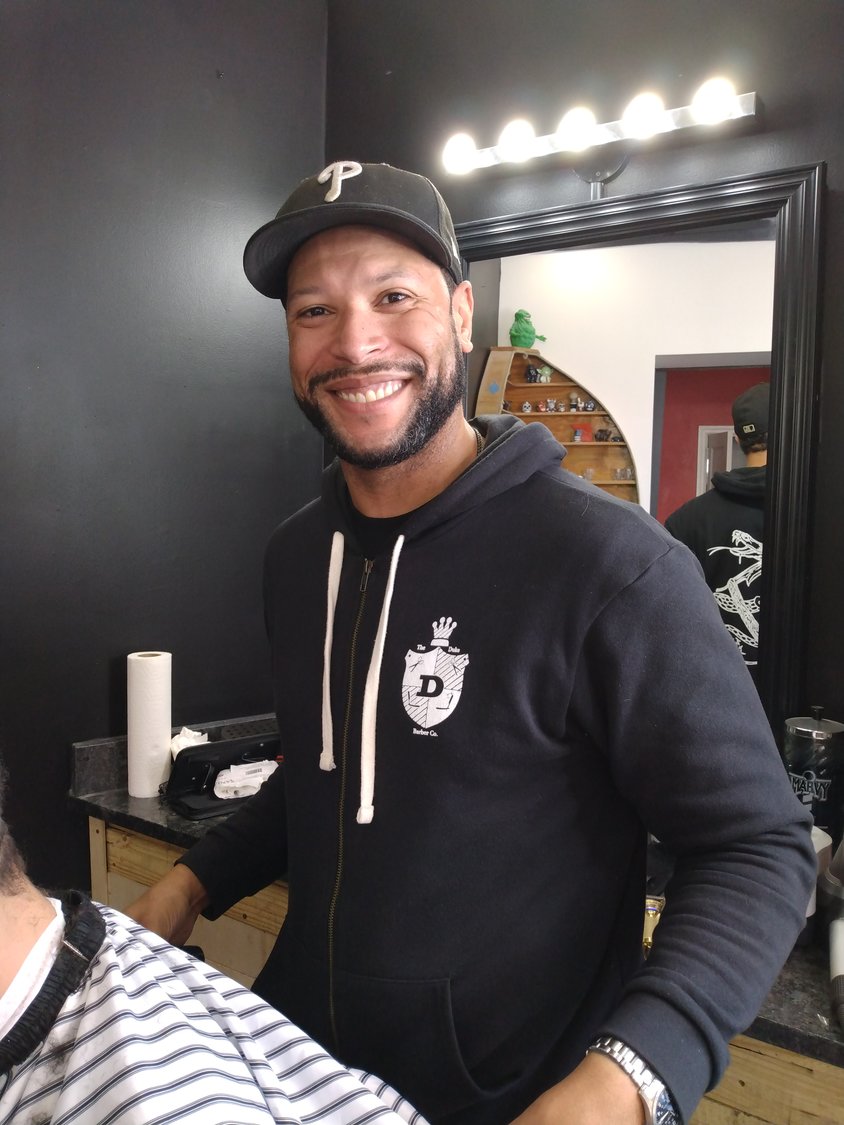 Will Brown, who opened his classic barber shop on Germantown Avenue in 2014, has developed a thriving base of loyal customers.
Posted Thursday, April 14, 2022 12:48 pm
by Stacia Friedman

Customers entering Duke Barber shop on the corner of Germantown and Willow Grove Avenues are welcomed by Chewy, a docile rottweiler who serves as official greeter and mascot.

Then they are guided to a vintage inspired barber chair that recalls Edward G. Robinson’s famous close shave scene in “Key Largo.”  When they cast their eyes about, they’ll see a mounted boar’s head, Ernest the caribou and a collection of Marvel Comics and Star Wars figurines. This mix of nostalgia and camp is not an accident. It reflects the adventurous spirit of master barber and shop owner Will Brown.

Brown, who opened Duke Barber eight years ago, offers what he calls “classic traditions in a modern world” to a customer base that includes women as well as men. This means giving the customer the “Royal Treatment,” which includes a tea tree oil hot prep, hot lather, a straight razor shave and healing mask treatment, along with a haircut, a complimentary cigar and a shot of “the good stuff.”

“My passion for barbering is part of a family legacy that goes back five generations,” Brown said. “I trace my family lineage back to 1896 when my great-great-grandfather was a barber in Virginia. When the family moved to Philadelphia, they opened a barber shop in Germantown near La Salle College. My fondest memories are working there when I was 12 years old.”

In spite of barbering being in his blood, it was not Brown’s first career choice. “I worked as a graphic designer and sold insurance, but later, with a wife and children, I gravitated back to what I knew best,” Brown said.

Before opening Duke Barber in 2014, Brown operated barber shops in other parts of the city for ten years, including Rittenhouse Square and Northern Liberties. When he decided to relocate to Chestnut Hill, he initially had his eye on the former Frank’s Barber Shop, a seventy-five year-old landmark further up the Avenue that had recently closed. “Frank’s closed in 2013,” Brown said, “But the family did not want to sell.”

Good thing that small space wasn’t available. As it turned out, Brown needed the larger space he currently occupies to accommodate his growing client list. His accolades include being cited as best barber and best shave in Philadelphia Magazine, and his expertise has been featured on shaving websites for Braun razors among others.

Brown also has become quite a well-known consultant, and has taught his barbering skills in Paris, London, the Netherlands and Miami. He’s just recently returned from a teaching tour in Amsterdam.

But his real rock-star status came from his appearance in the Netflix series, “Queer Eye.” The first episode of the show’s fifth season was filmed in Brown’s shop.

According to Brown, barbering, like the food service industry, is a nomadic business. After apprenticing for a while, employees have a tendency to strike out on their own. In 2016, for instance, he was caught off-guard when his entire staff gave notice and opened a competing barber shop across from the Chestnut Hill Hotel.

But that shop didn’t last.

“I’m all for people growing,” Brown said. “The problem is that knowing technique isn’t enough. You need management skills. My former staff thought they had learned enough, but they hadn’t.”

Brown quickly regrouped. “I have a great caring, professional staff,” he said.

He also has a cheerleader at home. “I wouldn’t be here if not for my wife, she is my biggest supporter,” he said. But if you spend any time with Brown, you realize that he has the warm smile, chair-side manner, business acumen and creativity to succeed at whatever he tackles, including cutting women’s hair.

In compliance with pandemic requirements, each of the four barber chairs at Duke Barber is separated by a clear vinyl curtain and all barbers wear face masks. The decor of the recently re-painted shop includes Ernest the caribou whose gigantic antlers take up most of the back room.

Now about that boar’s head.

“I was in Sedona and decided to go in search of some jerky I saw advertised,” Brown said. “I thought it was at a nearby store, but it turned out to be at a distant ranch where they raised wild Russian boar, bison and ostriches.” (If you’re vegan, you may want to stop reading.)

“I expected the rancher to sell me a bag of jerky, but instead he handed me a bow and arrow,” Brown said. Not one to resist a challenge, Brown followed the rancher to hunt his jerky on the hoof.

“I didn’t kill the boar,” said Brown, who admits to being better with a straight razor than a bow and arrow. “If the rancher hadn’t had a gun, I may have been on the receiving end of a charging 200-pound boar,” he said.

Fortunately, the rancher had good aim and Chestnut Hill’s master barber got his jerky, along with a mounted boar’s head and a story that intrigues customers as they sip whiskey, smoke a cigar and enjoy a close shave.

And don’t worry about Ernest the caribou. He was rescued from a museum in Ohio.