Tristan Jones had always sailed high and sailed low, but how low did the ‘Wayward Sailor’ go?

A page from a Sports Illustrated profile of Tristan Jones. by Hugh Gilmore Sometimes we’re all better off for not looking behind the screen to see the Wizard. For years I’ve wanted to dedicate a …

Tristan Jones had always sailed high and sailed low, but how low did the ‘Wayward Sailor’ go? 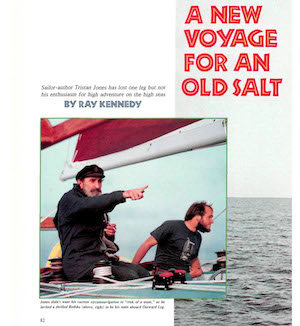 A page from a Sports Illustrated profile of Tristan Jones.

Sometimes we’re all better off for not looking behind the screen to see the Wizard. For years I’ve wanted to dedicate a column to praising the deep enjoyments of reading Tristan Jones. By the time he died in 1995 he was probably the best known and most respected sailing-adventure writer in the world. Though he had written journalistic pieces now and then during his young adult years, it was not until he was into his 40s that he began to undertake the sailing ventures he turned into 17 books, many of them best-selling.

He used record-busting as the means to get attention at first. In 1973 he glided out to set “the altitude record” for sailing by doing both the lowest body of water on earth, The Dead Sea in Israel, and the highest, Lake Titicaca, set in the Andes Mountains of South America at 12,500 feet. In Israel he was not allowed to actually put his boat in the Dead Sea, but a sympathetic Israeli naval officer did take him out in an official sailing vessel. He then sailed his boat from Israel to the West Indies, traded for a smaller boat, and sailed to Peru.

Once there, after much effort, he managed to get his boat hauled up to the lake. After navigating the lake, he dragged his small sailboat partly across South America and sailed out the Paraguay River to Mato Grasso and down to Paraguay and Argentina. The resulting book, written while living in Greenwich Village, came out in 1977 and was called. “The Incredible Voyage.” It was a great success.

After that, he undertook several more “stunt” voyages, but managed to make it seem as though he sailed mainly for emotional and existential reasons. Additionally, he took to writing about adventures he’d had before he became famous. The best of these, perhaps, is “Ice!” (1978). In it he set out from Iceland in 1959 in a small boat, accompanied by his dog, Nelson, and attempted to sail farther north than anyone else ever had. Trapped by ice, cold, and loneliness he faced violent storms and an attack from a polar bear that he killed by ramming a shotgun in its mouth. Later a broken spar swung at him and tore out his eye. He calmly placed it back in and, using a shaving mirror to see, sewed the eyelid back together with a sailcloth needle.

He also decided, during the years of his great success, to write about his personal history. He wrote, for example, that he’d been born on his father’s tramp steamer during a voyage around South America. He’d been raised in Wales, but went to sea at 14 and joined the British Royal Navy at 16. He survived World War II and numerous sea battles, including three sinkings.

Just about all of his 17 marine adventure books are enjoyable. His ability to tell a thrilling story while keeping a tone of calm and humility about his own person was inspiring. His philosophical reflections were soothing, his restlessness a curiosity, his wanderings a source of envy. And he wrote beautifully. The fans he earned both admired and felt tenderly about him. A perfect combination for any writer.

I feel privileged that he was still alive and writing when I was lucky enough to have first begun reading his books.

Now, dear reader: if you have not read any of his books and you think you’d like to give him a try, stop here. Just go read him. If you must, read on and ignore this warning.

In 2003, Anthony Dalton, a professional expedition leader, adventure guide, Fellow of the Royal Geographical Society and Fellow of the Explorers Club, set out to learn more about the crusty old Tristan Jones. After all, as I said, Jones had been the most successful sailing writer of the 20th century. Dalton read ships’ logs, talked to friends of Tristan Jones, researched everywhere he could find a lead. The result was Dalton’s book “Wayward Sailor: In Search of the Real Tristan Jones.”

And Jones turned out to be “Both a greater and a lesser man” than he had purported to be. His real name was Arthur Jones. He was born to an unwed mother, lived in several orphanages in Wales, was too young to have been in WWII battles, and fudged a lot of the miles and perhaps some (many?) of the adventures he wrote about, especially in his “memoir” books.

Some people who knew him before Dalton’s book felt hurt by the discrepancy. Others shrugged. Others were glad they got to enjoy the books before some of them were challenged. Myself? I immediately ordered the Dalton book when I found out about it today. It will probably enhance my admiration for the remarkable Arthur Jones. Creativity always requires one to create a self and I’d like to know more about how and why he did so. I’m sure I’ll still admire him and enjoy the books, despite knowing the “truth” about his and their creation.

Hugh Gilmore claims he hates being in over his head. He lives and writes in Chestnut Hill nonetheless.