Despite continuing concerns about COVID,  two Philadelphia area church choirs managed to fulfill their respective dreams of touring England and the Middle East. 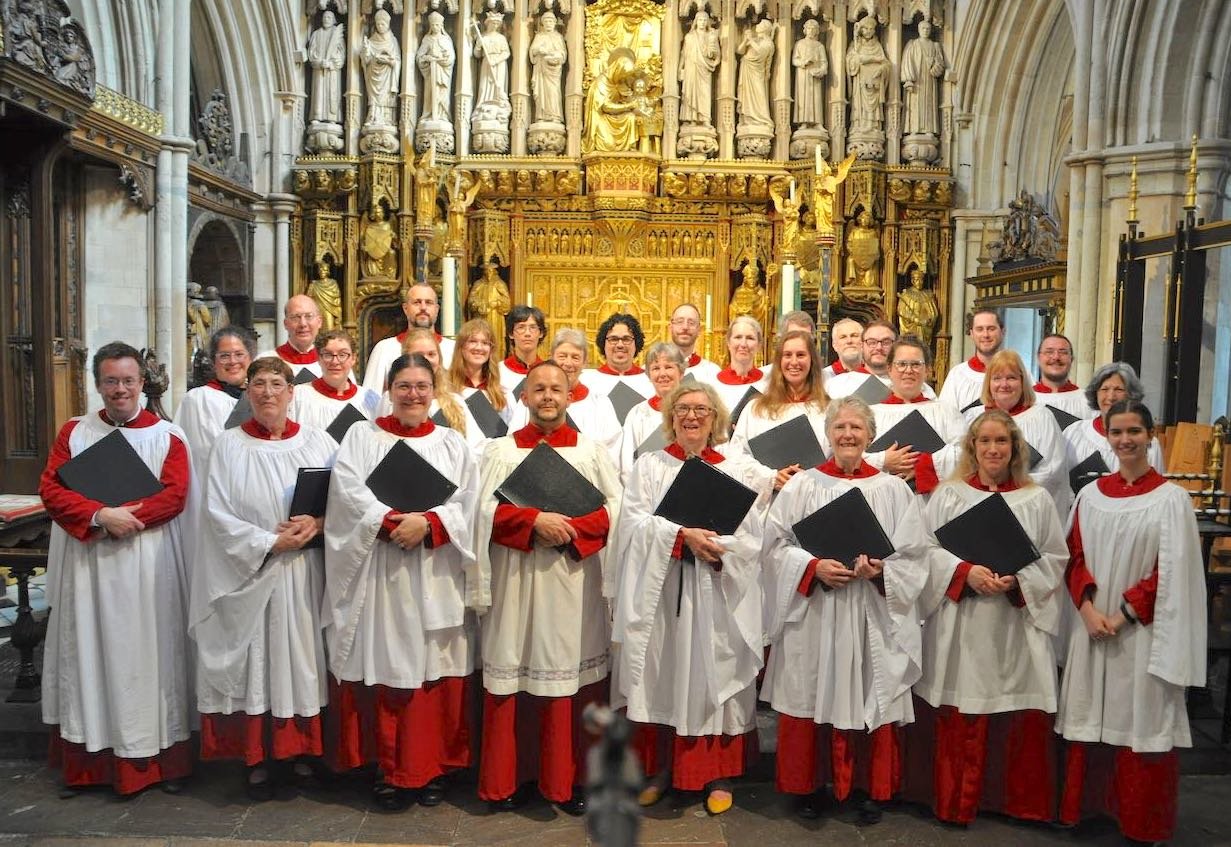 Despite continuing concerns about COVID,  two Philadelphia area church choirs managed to fulfill their respective dreams of touring England and the Middle East. The choir of St. Paul’s Episcopal Church, Chestnut Hill, sang in three English cathedrals while the choir of the Bryn Marw Presbyterian Church gave performances in Israel, Jordan and the Palestinian territories this summer.

Both choir’s memberships were, at times, reduced in size due to testing positive for the virus. All the same, both ensembles were able to maintain the basics of their schedules.

Andrew Kotylo, music director at St. Paul’s Episcopal Church, explained that the original intention was for the tour to include 31 choristers to sing at Exeter, St. Albans’ and Southwark Cathedrals. So much for those best-laid plans.

“Six of our choir members tested positive even before we left Philadelphia,” he said, “with two already in England on their own. Once we were in England, several more developed mild symptoms and also tested positive.”

The tour’s first stop was Exeter Cathedral. “It’s an ancient see,” Kotylo explained, “south of London, near the sea. It suffered some damage during the bombings of World War II.”

St. Paul’s Choir numbered 27 for its performances in Exeter.

“The first Sunday there, we sang a setting of the Mass by Rheinberger,” Kotylo said. “It was touch-and-go because we only had three altos who could perform. Fortunately, some of the altos in the Choir of Exeter Cathedral joined in to lend us a helping hand. But the worst of it was that our organ scholar, Emily Dawn Amos, also came down with COVID.”

St. Paul’s choristers sang four services, including a Choral Evensong attended by the Bishop of Plymouth, who was retiring. “For that service,” Kotylo added, “we sang the ‘Preces’ and ‘Reponses’ of Erik Meyer, the former music director at the Episcopal Church of St. Martin-in-the-Fields, here in Chestnut Hill. We also sang his setting of the ‘Lord’s Prayer.’ A special touch was that one of his aunts lives there in Exeter.”

Next on the tour was St. Albans’ Cathedral, located just outside of London. Initially begun in the Norman style, it was completed in the High Gothic and boasts the longest nave in England.

“We then sang three services at Southwark Cathedral, which is in a section of Greater London,” Kotylo continued. “The best part of being in Southwark was that we were finally all healthy and the music really came together there. Plus, the Cathedral has a fabulous organ.”

With the tour and the summer behind it – and approximately one-third of the pipes of St. Paul’s magnificent Aeolian-Skinner pipe organ returned and installed – the parish’s music program will be getting underway. Sunday, Sept. 25, at 5 p.m. will mark the season’s first Choral Evensong. Friday, Oct. 14, at 7:30 p.m. will see and hear the opening of the church’s new season of “Five Fridays” fundraising recitals. Call 215-242-2055.

One of the few local churches with as full a musical program as that of St. Paul’s Church is Bryn Mawr Presbyterian Church. Jeffrey Brillhart has been the congregation’s music director since 1983; he has also headed Singing City Choir since 1998. Singing City boasts 75 singers drawn from all over Greater Philadelphia while the Church’s Senior Choir includes 60 choristers.

The main sanctuary’s most acclaimed attribute is its French Romantic style 2005 Rieger organ. It features 59 stops, 88 ranks and approximately 5,000 pipes.

The church choir toured Jerusalem and Tel Aviv in Israel, Bethlehem and Nazareth in the Palestinian West Bank, and the 3,000-year-old city of Petra in Jordan. Sites included the Dead Sea and the Wailing Wall. The tour was hosted by Polyphony, a training center for young musicians.

“It’s a center for people of all faiths,” Brillhart said, “where everyone can come together to study what is really the foundation of all our musical traditions. I wish I had made the trip years ago because everything starts there, from spirituals to Gregorian Chant to Anglican church music.”

Continuing he explained, “Nothing really prepares you for being there. Or for how welcoming everyone was. There wasn’t anything they wouldn’t do for us, and working with the young people there was amazing. Our work-shops with them were wonderful.

Most moving of all? The Wailing Wall. “We all just burst into tears.”