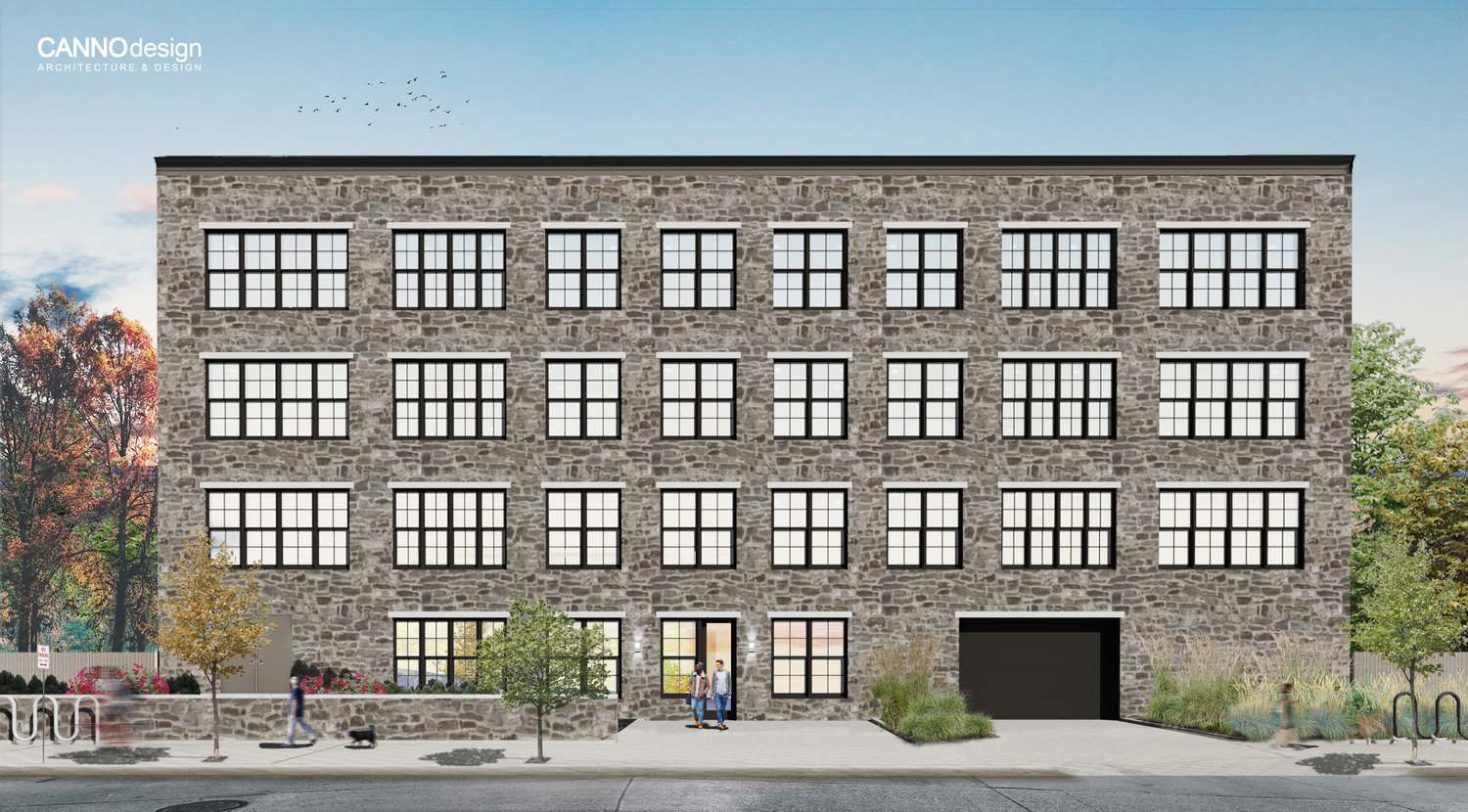 A rendering of the development proposed by Khosla Properties at the Sept. 6 CDR meeting. The development team is expected to make changes when the hearing is continued next month.
Photo from CDR presentation packet
Posted Wednesday, September 21, 2022 12:00 am
by Tom Beck

Both also are drawing some objections from neighbors who live in the less than one square mile area where three apartment complexes are at various stages of development. Construction of a third project, a 114-unit complex on the former site of the Trolley Car Diner, is currently underway.

Developers of the largest of the two newly-proposed developments, a 76-unit project at 20-30 Allens Lane, a site that was formerly an auto repair shop right behind the Wawa on Germantown Avenue, were told to amend their design by the city’s Civic Design Review board at a meeting on Sept. 6. Members told the development team, led by Khosla Properties, to reconsider the design of the facade and entrance to the four story building.

The second project, now being planned for 208 E. Mt. Airy Avenue, calls for 24 market-rate townhomes on the large site where Fred’s Mt. Airy Motors once operated. The project by developer Stuart Udis is currently stalled, as his team anticipates presenting updated plans in a follow-up community meeting that has yet to have a date announced.

In order to proceed with that project, Udis and his team will need to obtain variances from the city’s zoning board to build multi-family housing.

In considering the Khosla project, the design review board criticized the industrial aesthetic of the building’s current design and recommended “something that made the building feel more residential,” said Michael Johns, who chairs the board.

“The facade is lacking just some energy and somehow needs to be broken up,” Johns added. “The entrance also just gets lost and it's clear from this rendering here that the piece of the facade that you focus on is really the garage door, which is really the last thing that we really want to focus on for a building like this.

The board’s concerns were also shared by the Philadelphia City Planning Commission and Mt. Airy residents.

“We would like the team to rearrange the ground floor plan to include a more prominent and welcome residential entrance,” said city planner Mina Monavarian. “Right now, there's little space associated with this and we'd like to ask you to widen that up a little bit.”

“It seems somewhat industrial or factory-like and it was already suggested that the front entrance be changed and that there be some more diversity in the exterior,” Pinkus said. “We'd also like to see something to break up the exterior.”

Khosla plans to construct the entirety of the building’s front facing facade in Wissahickon Schist, with the remaining three sides predominantly being beige vertical siding. The building is slated to have a green roof in lieu of a common roof deck.

Tavis Dockwiller, a design review board member, called the entry to the building “disturbing.”

“That graciousness of entry that makes a home or an apartment building wonderful to arrive at - it's just not doing it for me here,” she said.

Johns also said that the building overpowers the home next door.

“It's different to have an apartment building that looks like a factory, essentially, next to a historic home that was built in the early 1900s,” said neighbor Stephanie Lunt, who lives in that house.

Pinkus also complained about the lack of parking for the project, which has 26 parking spaces for its 76 units.

“There is a real concern that there will not be adequate parking available in the neighborhood for those who will not be using the parking garage,” he said.

However, the building is proposed by-right and no more parking is necessary to fulfill legal zoning requirements, making it unlikely that neighbors’ parking concerns will be addressed. The development team said more parking isn’t necessary due to its proximity to multiple public transportation stations.

“We believe this is perfectly in line with (transit-oriented development),” the development team’s attorney, Adam Laver, said.

The property is right along the 23 bus route on Germantown Avenue and a short walk from both the Sedgwick train station on SEPTA’s Chestnut Hill East Line and Richard Allen Lane station on the Chestnut Hill West Line.

The design review process will be completed at the next hearing, which is scheduled for Oct. 11.