Volunteers are the hidden treasure at Bird in Hand Consignment Shop

Volunteers are the hidden treasure at Bird in Hand Consignment Shop 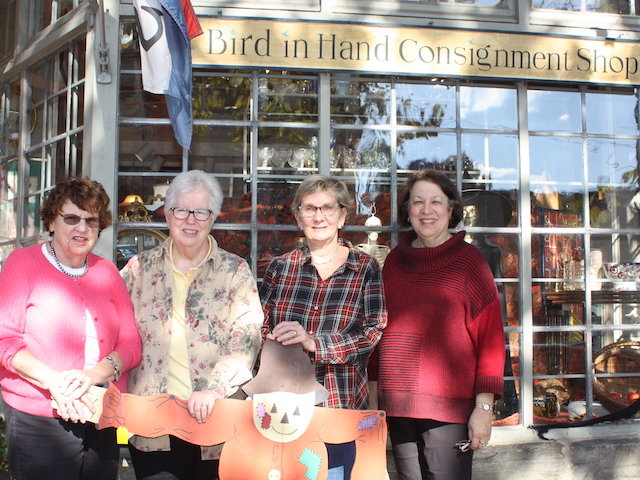 Waterford crystal, a Japanese kimono, hand-painted plates, fine china, antique silver flatware, homemade crochet lace table linens, antique jewelry, paintings, small furnishings and even an 18th-century spittoon are just a few of the items you will find at the Bird in the Hand Consignment Shop, 8419 Germantown Ave. in Chestnut Hill.

The store, which originally opened in 1976 on Highland Avenue before moving to its current location in 1987, was founded under the leadership of Dottie and Ed Sheffield with one mission: to help raise funds for nonprofit organizations such as the Chestnut Hill Garden District Fund and Friends of Chestnut Hill Library to improve the Chestnut Hill community.

Of all the treasures in the 400-square-foot shop, perhaps the most priceless treasure is the store’s volunteers – roughly 20, who dedicate countless hours of their personal time.

Longtime volunteer Dolly Stamat, of Ambler, who was the first director after Dottie Sheffield, said one of the reasons the store is popular is because people know a portion of the money they spend in the store goes director back to the community.

Stamat, 80, a former Chestnut Hill business owner and resident, jokingly said she began volunteering because she was bullied into it. She loves volunteering and has made many friends over the years. Sadly, she said, some have passed away.

She recalled when the store moved from Highland Avenue to its current location.

“Caruso's Market loaned us flatbeds that we used to push the counters and the merchandise around the corner,” said Stamat. “Before that, we never used a cash register, we used a cigar box and put the money in the electric box on the wall.”

Erdenheim resident Sue Brint, 67, said she decided to volunteer in the store after consigning one day.

“When I retired, I was looking for some other things to do,” she said. “I was still working part-time. It’s fun. It’s something different. It’s a happy environment to be in. It’s been an education working here. I’ve learned a lot.”

Mt. Airy resident Sara Robbins, 65, a current board member and secretary, said one of the things that drew her to Bird in Hand was that it survived for so many years, and she added, “It couldn’t have done that without the support of the community.

“There’s always a story behind everything people bring in to consign,” she said, “or people will say, ‘The darn kids don’t want my stuff.’ It’s nice to know there are still people who want to buy it, and it’s always fun to hear people’s stories behind the items they bring it.”

“This season our board of directors decided to focus on nutritional nonprofit programs within the community,” Patty said.

“Recently, we purchased a bench from the Chestnut Hill Business Association [for $2,090] to dedicate to our Founder Dottie Sheffield,” she said. “The installation will occur sometime soon.”

When asked what she likes most about being executive director at Bird in Hand, she found it difficult to narrow it down to just one thing.

“There are so many wonderful aspects to my job as executive director – meeting amazing people in the community and getting to know them, supporting customers as they make major life transitions, whether it be through house calls, or consignment, working with our board, staff and volunteers decorating the shop with an amazing array of interesting beautiful things and finding new homes for these treasurers,” she said. “And ultimately deciding with our board of directors which nonprofits to support. And last, but definitely my favorite, writing the checks for these organizations.”

Over the years, Patty said she has seen “many, many beautiful and unusual things” consigned.

“As a sculptor and jeweler, I am captivated by gems and jewelry,” she said. “We had a consignor who brought in a Ceylon sapphire ring and diamond wedding band that had belonged to Anna Freud. They also had a bracelet which we did not sell, but we were shown, that was a gift to Anna Freud by her nephew the painter, Lucien Freud.

“Another time, I was working with Irene Watson a longtime volunteer, current board member and fellow jeweler. We were working on a Sunday going through a dropoff consignment box full of household items, and we got to the bottom and discovered a trove of beautiful jewelry. Each day I learn something new at Bird, perhaps about an object or how to better approach my fellow human beings. It is never boring.”

Bird in Hand is open Monday to Saturday from 10 a.m. to 5 p.m., and Sunday from 11 a.m. to 4 p.m. Email birdinhandconsignmentshop@gmail.com to volunteer or donate.