About halfway through a Count the Vote rally in Chestnut Hill on Saturday, word came that Joe Biden won the state of Pennsylvania, and about 150 area residents flocked to the scene to celebrate at … 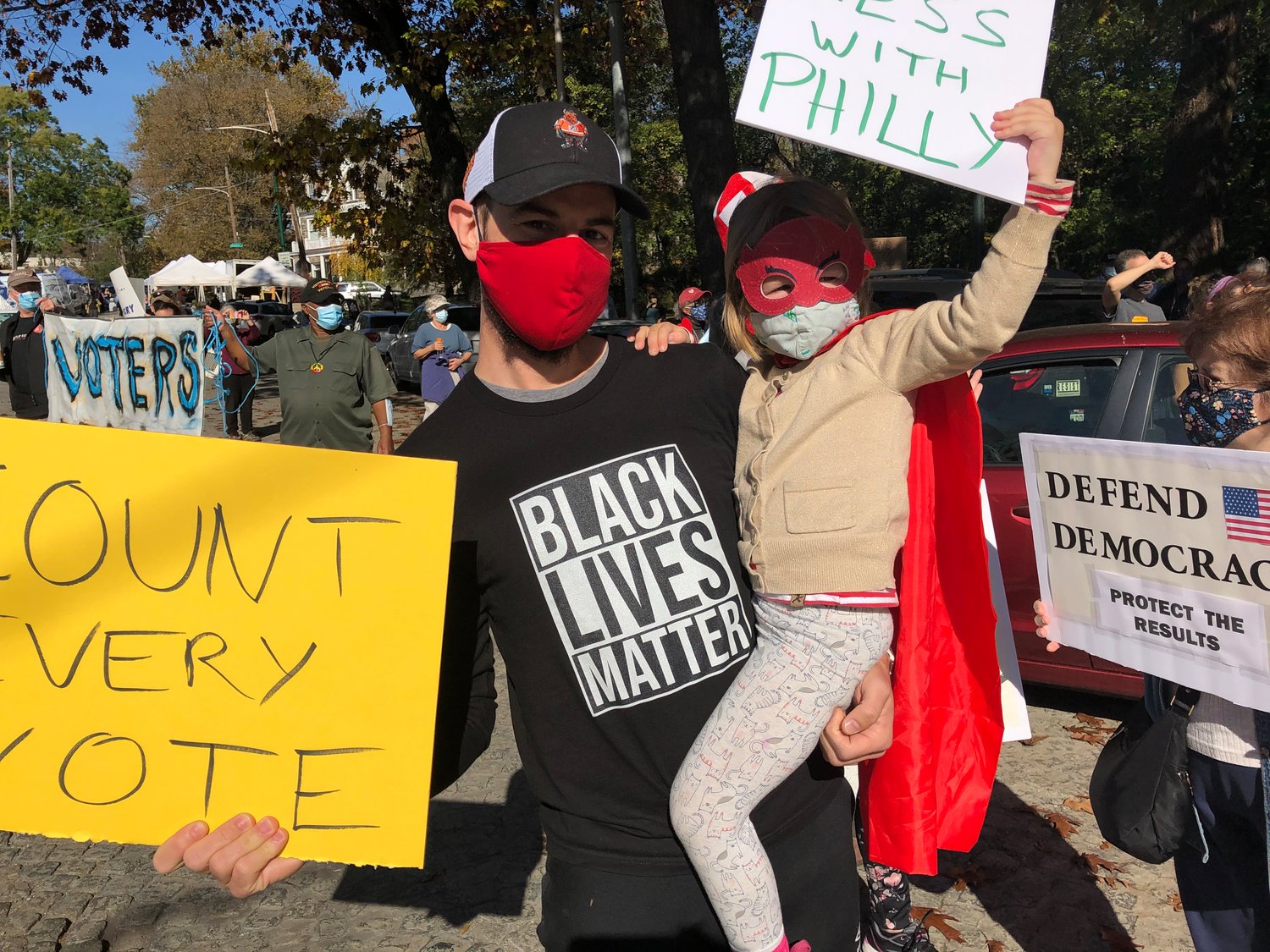 Chestnut Hillers Johannes Karreth, and his daughter, Mar, 3, in her Superwoman costume, were in the spirit at what was a Count the Vote Rally turned Biden Victory Party in Chestnut Hill on Saturday. (Photo by Barbara Sherf).
Posted Tuesday, November 10, 2020 12:59 pm
by Barbara Sherf

About halfway through a Count the Vote rally in Chestnut Hill on Saturday, word came that Joe Biden won the state of Pennsylvania, and about 150 area residents flocked to the scene to celebrate at Germantown Avenue and Creishem Valley Drive.

Chestnut Hill resident Michael Bertrand helped bring the crowd up to about 200 when Biden won Pennsylvania.  He was walking his dog and heard the uproarious cheers and honking of the horns of cars and buses on Germantown Avenue.

“I heard the honking and wanted to be around other like-minded people in this great historic moment,” said Bertrand, noting that he was concerned about President Trump handing over the presidency.  “It’s just because he seems to act as a child.  But this is a democracy and we won and we will move forward.”

“I’m exhilarated and relieved and very emotional right now,” she said as she and others shed a tear.  “I’m hopeful about the future but I do have some concerns that he (Trump) won’t concede easily.  Hopefully, his advisers are getting him ready to face reality.”

Andrea Sorkin of Chestnut Hill was running a little late for the rally that was filled with Count Every Vote singers and speakers.

“I saw it on the news, and the whole neighborhood erupted with sheer joy.  I have no doubt the votes in Philadelphia and beyond were legitimate,” said Sorkin, whose father recently was diagnosed with Covid-19.  “We couldn’t get him in the hospital.  There was not enough room, but he’s recovering now.  The ability to be here and celebrate is powerful.  I can’t even express my joy.”

Chestnut Hillers Alexis Baldes, and her husband, Andres, were out for a dog walk and walked into the unexpected.

“We didn’t expect this.  Everyone was honking and full of joy,” said Andres, who does worry about President Donald Trump moving on.  “He is defiant and ready to put up a fight.  I wouldn’t be surprised if he dragged this out and I’m worried about the damage he can do in the next two months with the Affordable Care Act and Covid relief,” said Andres Baldes.  “I just know he’s not going to give up without a fight and that would be damaging to the process and our country.”

Nadia Pacheco Amaro, formerly of Mexico and now living in Mt. Airy became a US Citizen in 2013.

“I’m elated.  My parents and I immigrated when I was 13.  I had to go through so much to vote.  I was only 17 for the 2016 election so I became a poll worker to show how important it is to have a voice and now I am represented.  This is one of the most historic times in my life.  I’m elated as a Mexican, as a woman and as a lesbian to feel my rights will be protected.”

William Previdi of Chestnut Hill heard the honking and grabbed his camera.

“I heard all of the honking and I’m here to celebrate,” said Previdi, who is 17 and was not eligible to vote.  “I’m very pleased with the results and I don’t think there is much Trump can do about it.”

Mt. Airy resident Amy Bodeman shed a tear as the emotion of the moment caught up to her.

“Now we get to breathe and today we have this.  We still have a lot of work ahead of us.  I’m just afraid he’s never going to concede because of his narcissistic ways and I’m afraid he’s not just going to go away,” Bodeman said.

“I’m just relieved and we get another chance at democracy and to perfect it,” said Rich.  “I’m not so much concerned about Trump as we have the momentum of the country on our side.”

Jane Century of Mt. Airy was glad to see the rally turn into a victory celebration.

“I’ll always remember where I was.  Look at how many people are honking…even SEPTA is getting into the action,” said Century. “ But I am concerned he’s not going to go quietly into the night,” said Century, 71.  “I was a poll watcher for the first time ever this year.  It was an incredible experience to facilitate a free and fair election.  I’m glad I didn’t stand on the sidelines.”

Volunteer Dennis Scott of Germantown, who is Black, grew up in the South during segregation.

“It was great to be here when they called it.  It’s been unbelievable.  I grew up in North Carolina with White Only bathrooms and entrances and drinking fountains,” said Scott.  “I’ve been doing Black Lives Matter protests and I’m still concerned Trump will try to disrupt our democracy.”

Elayne Aion and her wife, Joan Lieht, of Glenside, were filled with relief.

“It’s a celebration now and not a Count the Vote rally.  I’m so glad to be here with all of these people, said Aion, while Lieht had some concerns.  “It’s hard to imagine this day arriving but I do have concerns over this dragging out.”

Elissa Goldberg of Mt. Airy was all about doing a dance.

“This is a total celebration.  I was waiting to do my happy dance and now I got to do it with all of these people,” said Goldberg, who voiced some concerns about a smooth transition.  “I think it’s going to be hard for him to give up and if we don’t win the Senate it will be hard for Biden to get everything he wants done.”

Brittany Grabois was walking up Germantown Avenue from Mt. Airy to the outdoor Farmer’s Market in front of the Mermaid Inn.

“I heard the screams and the texts started coming in and to be here is insane and amazing.  I’m out here crying with a lot of strangers,” said Grabois.  “Im happy to be around like-minded people and finally celebrating together and moving on.”

East Mount Airy residents Bruce Pollack-Johnson and his wife, Linda, were part of a band that set up early on to do protest songs.

“This is the most satisfying protest I’ve ever been at.  We have a resolution,” said Pollack-Johnson as Linda chimed in,” We were trying to do a Count the Vote rally and it turned into a party.”

Colleen Howard of Chestnut Hill was elated and had the last word about hope.

“I’m very excited.  I went to the first Women’s March in DC after the 2016 election and felt it was important to come here and make our voices heard,” said Howard, who was also concerned with the transition.  “I think there will be a lot of litigation, but in the end, democracy will prevail and there are people in his own party who will hold up the Constitution.  Today, I am filled with hope, “ said Howard.

Correspondent Barbara Sherf can be reached through her website at www.CommunicationsPro.com.