Since 2015, Weavers Way Co-op has been offering shoppers on a limited income a 10 percent discount on the high-quality, nutritious food that is their specialty. And as of September, the stores have been taking it a step further - pushing that discount up to 15 percent. 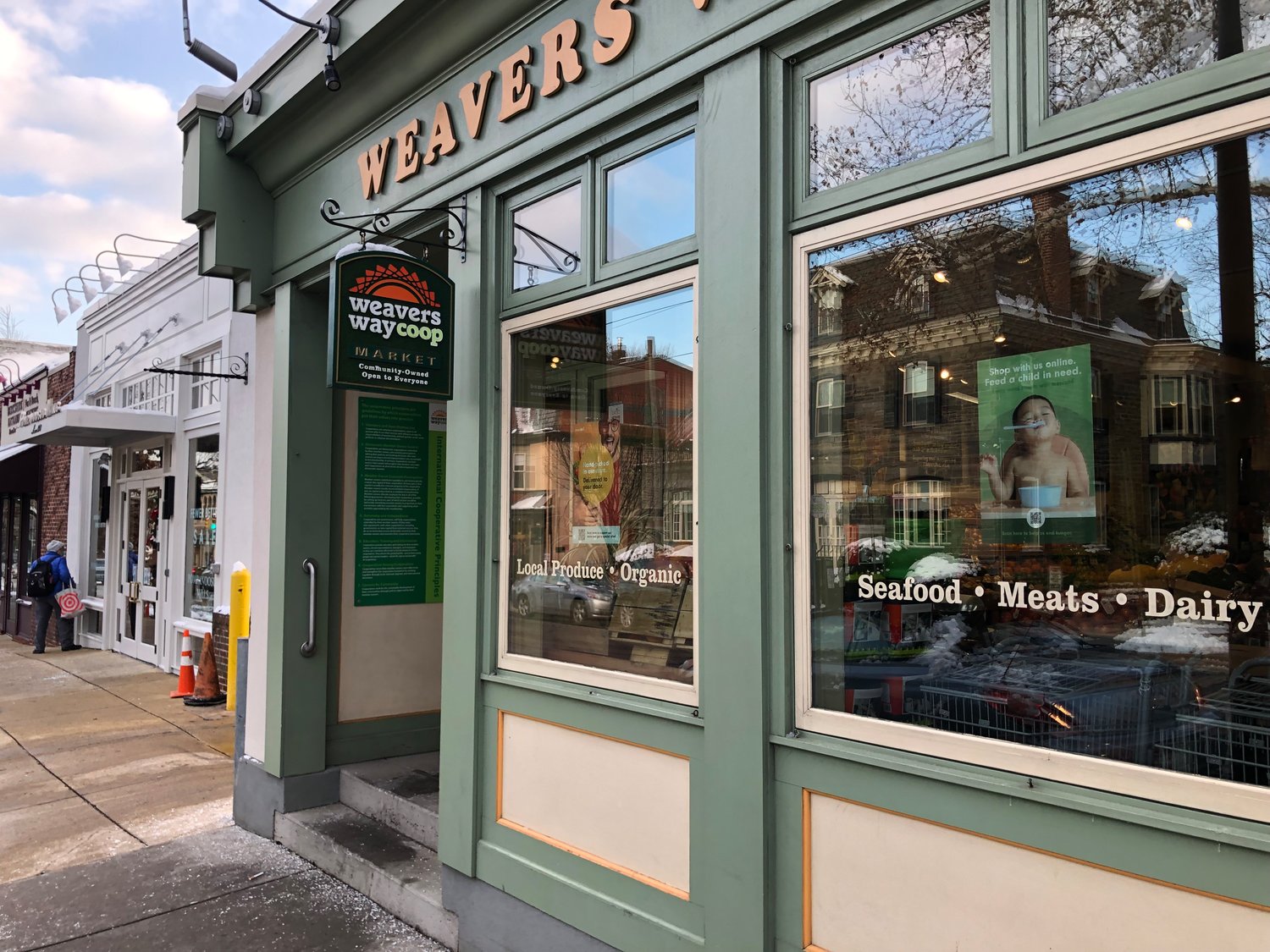 The Weavers Way Food Co-op store on Germantown Avenue in Chestnut Hill. The Co-op offers opportunities for those in need to shop at a discount through the Food for All Program. Through the Round Up Program, members can voluntarily support the discount by rounding up each transaction to the nearest dollar. (Photo by Barbara Sheehan) 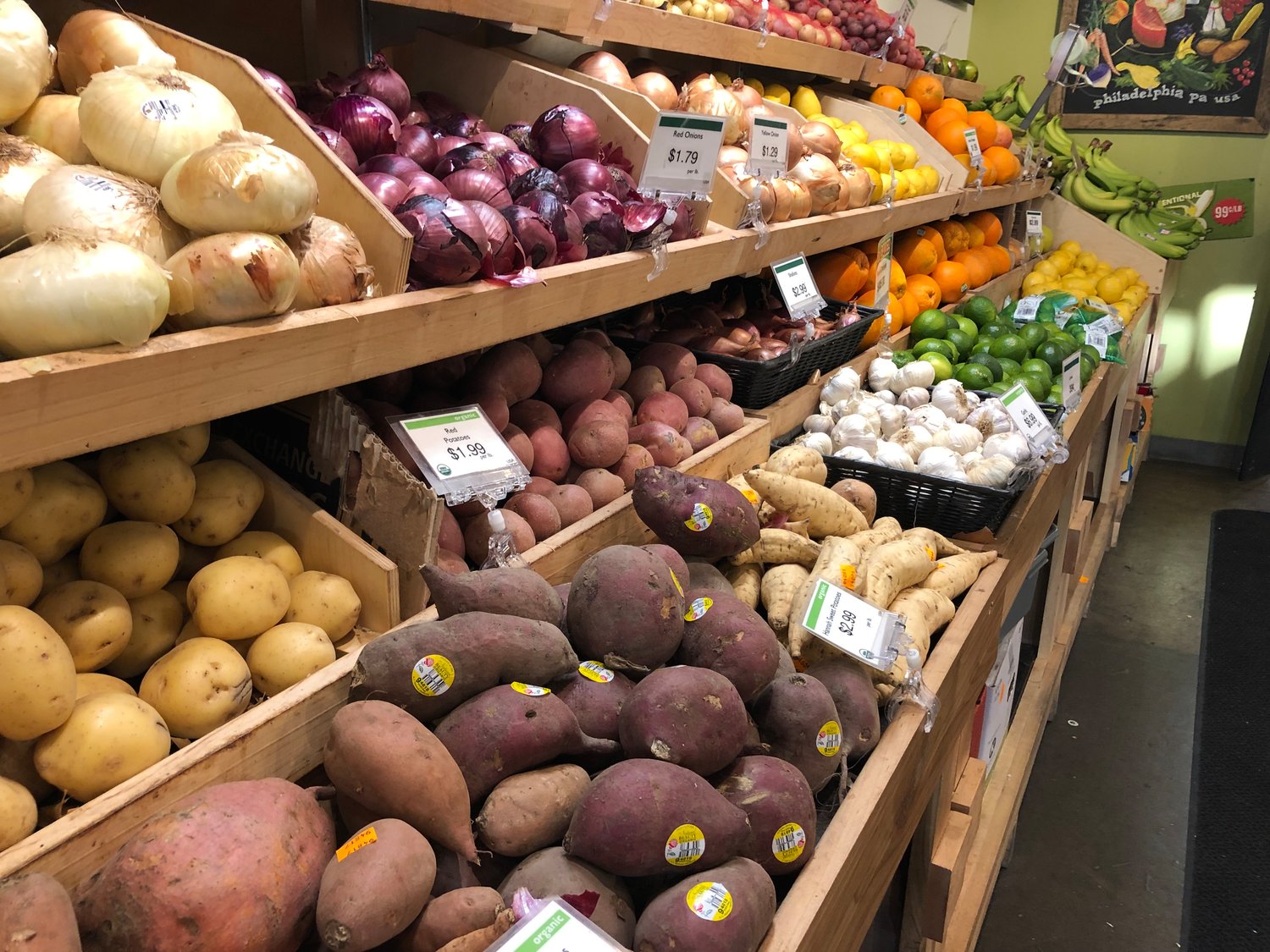 Weavers Way Food Co-op, Chestnut Hill store’s vegetable display. The Co-op’s Food for All Program provides a 15% discount to members with limited incomes. The discount is supported by voluntary contributions through the Round Up Program. (Photo by Barbara Sheehan) 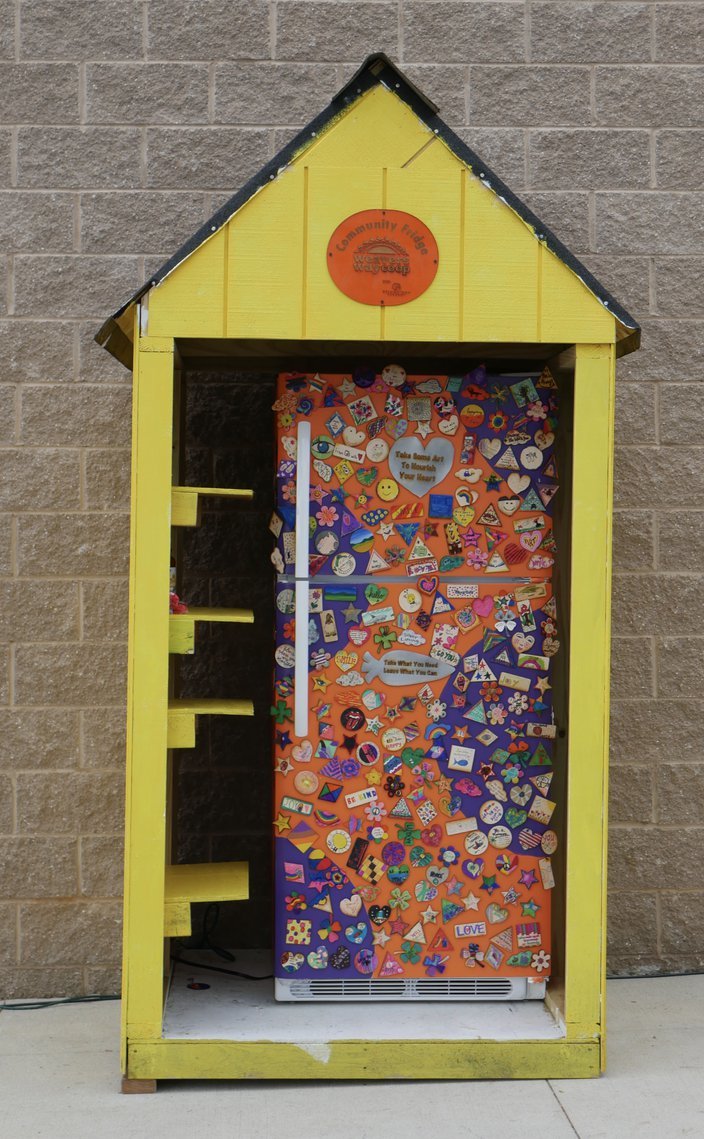 The Community Fridge outside Weavers Way Food Co-op ‘s Ambler store is available for anyone who needs food or wants to donate food. The fridge has been heavily utilized during the pandemic. General Manager Jon Roesser plans to install similar fridges outside the Mt. Airy and Chestnut Hill stores as one more component of the Co-op’s Food for All Program. Photo courtesy of Weavers Way.
Previous Next
Posted Thursday, January 27, 2022 6:00 am
by Barbara Sheehan

Think the fresh, local and high quality food at Weavers Way food co-op is only for people with no worries about money?

Think again. Since 2015, Weavers Way Co-op has been offering shoppers on a limited income a 10 percent discount on the high-quality, nutritious food that is their specialty. And as of September, the stores have been taking it a step further - pushing that discount up to 15 percent.

They’re doing it with the help of other shoppers - those who opt to “round-up” their payment at the cash register and donate the extra change. For instance, if your purchase totals $35.23, and you opt in, your bill would automatically be rounded up to $36.00 - putting $.77 into reserve for those in the Food for All Program.

These “RoundUp” shoppers are participating in the newest part of the co-op’s mission - what General Manager Jon Roesser calls “cooperative economics.”

When the discount was 10 percent, the store just absorbed the cost. But at 15 percent, he said, it takes some extra help. And he knows that understands that some residents refrain from shopping at the Co-op because their food budgets are limited.

“When your product philosophy emphasizes locally grown and produced food, products that are all-natural and organic, and working with producers who treat workers fairly and animals humanely,” said Roesser, “you’re not going to be the cheapest grocery store in town. Inflation exacerbates this fact.”

Members who receive low-income support such as SNAP (food stamps), Medicaid, SSDI, or military disability all qualify for the program. These members also get a reduced rate for annual memberships, paying $5 a year instead of $30. And then there are the five percent discount for working members and for Weavers Way branded items, and the weekly 10 percent off for seniors.

Starting in February, Roesser said, the co-op is also hoping to offer the program to any member experiencing an “undisclosed financial hardship” due to an unexpected expense.

The idea, Roesser said, is for members to be able to help one another as needed.

“It’s intended to be both symbiotic and fluid,” he said. “A member in Food for All this year may be in Round Up next year, and vice versa.”

Weavers Way operates under the rubric of seven International Co-op Principles - which are posted prominently outside the Chestnut Hill store. And according to Roesser, the Food for All Program/RoundUp programs put into practice two of those principles: Member Owned Economic Participation and Concern for Community.

And it certainly seems to be popular.

And so far, the 351 members enrolled in the Round Up Program donated a total of $1,410. Roesser and the Co-op Board hope that as members learn of the opportunity to participate, the two monthly amounts will balance each other out. Co-op members can easily opt-in to the program by updating their online member accounts.

At the moment, the Round Up program has a technical limitation, as the most anyone can donate per transaction is $.99.  But Roesser said some members have told him they’d be willing to donate more - so he’s working on adjusting the point of sale software so they can handle that.

One 70 year-old East Mount Airy resident in the Food for All Program, a retired administrative assistant who has been a member for 30 years, is living on an income of $13,000 a year in Social Security. She qualifies for $20 a month in food stamps (yes, that is not a misprint, $20/month).

She has been in the Food for All Program for the last five years. She is a working member, and said she finds it to be a great educational experience to learn about foods and the products sold at the store.

She also feels fortunate to live in a house she owns and to be supported by her adult children, including one son who lives with her and assists with some household expenses. But the program is a big help, she said.

“It doesn’t help me to buy more items, but it helps me to purchase selective items that I am unfamiliar with,” she said. “I will try an item because it is on sale or because everybody likes it.”

She encourages friends to join the Co-op. Not to save money, she said, but because “I feel very confident and safe when I shop at the Co-op that the items I am purchasing are of excellent quality. Everything in the store has already been evaluated.”

A Chestnut Hill educator and father of four school-age children said that he and his wife do all their shopping at the Co-op for similar reasons. To him, the Co-op is an essential part of the neighborhood. “I can’t imagine Chestnut Hill without it.

“We try to live a pedestrian lifestyle,” he said. “We can walk to it, and we are so grateful for the Co-op in so many ways - paying staff fairly, local foods.”

One of his children has a medical issue that makes her Medicaid eligible, he said, which makes the family qualify for the discount.

“I’m very grateful that the program exists,” he said. “It makes it a little more affordable for our family.”

Retired nurse and lactation consultant Carol Tenneriello of East Mount Airy, whose family has been a co-op member for about 40 years, signed up for the Round Up Program after hearing about it at a general membership meeting in the fall.

“It’s a good thing to do,” she said. “It’s hard for some people right now to make their food budget.”  She recognizes that even when things are reduced, a lot of products are expensive. “The more discounts they can get, the better,” she said.

She and her husband John Ascenzi, a retired science writer, place a high value on the principles of the co-op - paying staff a fair wage, providing urban farming opportunities, and prioritizing local and healthy food choices.

About the Food for All Program, Ascenzi said, “How can you disagree with making money available to people who need food?”