On Wednesdays, a group of bicyclists gather for the 6 p.m. “Espresso Gravel” bike ride, a 17-mile trek over gravel tracks in the Wissahickon. 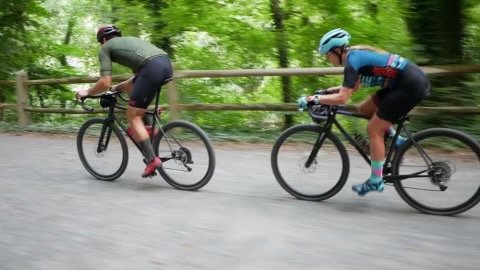 On Wednesdays at about 5:45 p.m., a group of people with bicycles gathers at the Paper Trail Bike Café in Historic Rittenhouse Town in the Wissahickon. They are getting ready for the 6 PM “Espresso Gravel” bike ride, a 17-mile trek over gravel tracks that once were roads for cars. Anyone is welcome to join them, and there is a fleet of 10 gravel bikes available for rent.

“The idea is to make everyone feel welcome…Everyone goes at their own pace and we regroup and wait at the top of the hills. We cheer each other on and there’s just lots of camaraderie,” said gravel bike guide and Chestnut Hill resident Deborah Leedale-Brown.

Leedale-Brown is not just a gravel bike rider. She has raced on mountain and road bikes, as well as gravel bikes, and is on what she calls a “biking journey.” British born, she came to America 16 years ago with her husband Damon and son Oliver, then a toddler. And her adventures did not start with the move across the pond. After all, in England she coached Olympic athletes on Great Britain’s diving and cycling teams.

But moving to the U.S. did ignite her passion for bike racing. In the 16 years since she has been in this country, she has won “a whole cabinet full” of racing trophies. In addition to working as a gravel travel bike guide, she coaches amateur athletes and teaches yoga.

Her U.S. adventures started in 2005, when the couple moved to Wilmington, Delaware to start a squash facility.  To jumpstart their social life, they joined the local mountain biking community. They would take their son to races, each switching off racing with taking care of him. Leedale-Brown raced mountain bikes for five years with a Wilmington-based team.  She also started road racing and quickly established herself as one of the stronger women racers. In 2010, she began to focus solely on racing road bikes, quickly accruing the points needed to earn her professional race license. In 2012, she became part of a New Jersey women’s team, and her road racing career took off: “In my biggest seasons, I was competing in more than 30 races a year.”

Typical biking seasons ran from March through September, and took her across the country. “I’d generally go out to Arizona in March to do some warm weather training and do some races out there,” she said.

Soon sponsors asked her to ride their bikes, and wear their helmets and biking shoes. Companies gave her nutritional treats to try. To honor the sponsorships, she established a social media presence, which she still has today.

Leedale-Brown’s proudest moment in road biking came when she won third place in 2017 at the Tour of Somerville, one of the oldest bike races in the country. It takes place over Memorial Day weekend in Somerville, New Jersey. In 2016, she held the Pennsylvania State Championship and in 2018 she was voted the Pennsylvania Cycling Association’s Elite Women’s Rider of the Year.

By then, in 2013, she and her family had moved to Chestnut Hill, so Oliver could attend Penn Charter, where Damon Leedale-Brown has been the Director of Squash and Middle School PE.

Deborah Leedale-Brown was a lot older than most of the racers on her team. “With many of the women being in their teens and early twenties, I was like the mother on the team!” she said.

And road racing is not for the faint of heart. She has had to jump over people who have crashed in front of her while she was racing, using some mountain bike skills for the leap.

“When you’re racing shoulder to shoulder, 25 to 28 miles per hour, turning tight turns, then there will be crashes,” she said. “I’ve been very fortunate. Although I’ve been in crashes, I haven’t had major injuries.”

In 2019, at the age of 47, she decided to retire from road bike racing. She continues to coach athletes through her company, dlb2-Full Potential, remotely monitoring client vitals, sleeping and workouts. And for the past five years, she also has volunteered as the mountain bike coach at AIM Academy in Conshohocken.

Then she discovered a love of gravel biking, which is biking on former roads for cars, like Forbidden Drive in the Wissahickon. And right before the Covid lockdown, in early 2020, she came across the Paper Trail Bike Café, which had opened in an old barn in Historic Rittenhouse Town.

“I rode in the Wissahickon all the time and suddenly I saw this building with a café and bikes,” she said. “Obviously, I wanted to stop by and say hi, and be nosy.”

Leedale-Brown met owner Paul Daniels, along with his colleague Mark Yanagisawa, and the three of them had many conversations about biking. They spoke about starting a weekly bike ride and a bike-trip travel company.

Then the pandemic happened.

Although the bike café stayed open, the three could not launch their idea until this past May. Since then, anywhere from 10 to 40 people have gone on the weekly Gravel Espresso rides.

Paper Trail Gravel Travel Trips began this past spring, when people were traveling again. Leedale-Brown, Daniels and Yanagisawa produce all-expense-included four-day trips for up to 12 guests. They take care of all the bikers’ needs, from meals to laundry, stretching and yoga, guiding them on beautiful gravel roads in the backcountry of Vermont, Pennsylvania, North Carolina and Arizona.

Deborah currently bikes 100 to 150 miles per week, either riding for her own enjoyment or coaching. She still participates in gravel and mountain bike races. On Oct. 10, she biked 125 miles in UnPAved, a gravel race in Lewisburg, Pennsylvania, where she rode in the pouring rain for 10 hours and 50 minutes.

“The conditions were epic; the scenery was amazing. You could see our white-teeth smiles through our muddy faces,” she said. “I crossed the line immediately thinking I’m going to sign up again next year.”