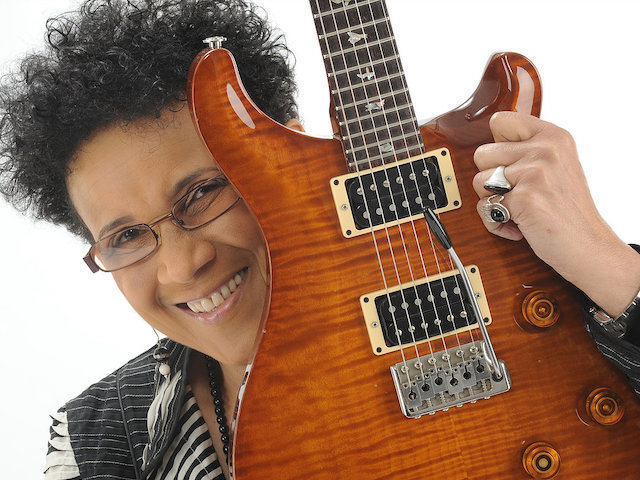 I am not a jazz aficionado, but when I heard lifelong Germantown resident Monnette Sudler play the guitar in October of 2014 at one of Woodmere Art Museum's Friday Night Jazz series, I was blown away. She had an advanced harmonic style and sophisticated scales that produced extremely complex chord structures. I felt like I was listening to an all-time great, comparable to Wes Montgomery, Pat Metheny or George Benson.

When I interviewed her afterwards, I was even more shocked to learn that the previous year she had been close to death. She had been diagnosed with pulmonary fibrosis, a disease that causes scarring and stiffening of the lungs, and that at times she was on an oxygen lung for many hours at a time, struggling for each breath.

But in 2013, when Sudler had just about given up hope, a lung donor was found, and Sudler underwent a double lung transplant at Temple University Hospital, which essentially gave her a new life.

“I feel great, like I was born again,” she said in October of 2014. “I was afraid I would never be able to play music again, but here I am doing my thing, just like the old days. I appreciate every day so much now. It is a joy to be alive and play music!”

When Sudler was growing up, she fell in love with jazz while listening to her great-uncle, Nathan, play the piano. “I would sit on the floor at his feet and listen to his music,” she said. “He played by ear and would come play our baby grand piano.

“Once I heard my great-uncle play, I would ask where I could find that music on the radio,” she said. “My mother had a few recordings of Nat King Cole, her favorite, and Fats Domino.”

Her stepfather played guitar by ear, as did a couple of his friends who would come visit, she said.

“I did ask them to teach me, but they declined because they were self-taught,” she said.

But her mother, who played the piano, got Sudler started with lessons when she was 8.

“She was so proud when she purchased that piano,” she said. “My teacher was named Dr. Lewis.”

Then her aunt, Marlene Robertson, helped her get started on guitar. And later, she took guitar lessons at the Wharton Centre at 22nd and Cecil B. Moore Avenue.

“My first guitar teacher was Carol Friedman,”  Sudler said. “She taught folk guitar, which I still love to play and incorporate into my music quite a bit.”

Sudler devoted her life to becoming one of the area’s finest jazz musicians. Most jazz buffs knew her as a world-class jazz guitarist, but she also played drums and piano, and she composed, arranged, sang and wrote poetry and created numerous jazz albums.

Early in her career, Sudler worked with vibraphonist Khan Jamal in the Sounds of Liberation ensemble, a trailblazing band that mixed jazz and funk – and devoted its 1970 social activism to Black empowerment. The group, based in Germantown and Mt. Airy, also included Byard Lancaster on the alto saxophone, Billy Mills on bass, Dwight James on drums, Omar Hill and William Brister (Rashid Salim) on percussion.

It would literally take an article all its own to list every jazz luminary she has played with since then, but I will mention just a few: Sonny Fortune, Freddie Hubbard, Hugh Masekela, Trudy Pitts, Odean Pope, Shirley Scott, Archie Shepp and Grover Washington Jr.

Like many musicians, Sudler didn’t just play music. She also had to take on extra jobs to make ends meet.

“I had two sons to support once my marriage was done, so I worked as a cashier, bank teller, and in mental health and administration. I would step outside the music box if I had to,” she said. “Music is my ministry, though.”

Sudler graduated from Roosevelt Junior High School and Germantown High School. She attended the prestigious Berklee College of Music in Boston for a summer program but could not continue because “my mother was in between financially - she made too much for me to get tuition assistance and too little to afford the cost,” she said.

During her long career, Sudler performed for large and small audiences. Among other projects, she was commissioned to compose music for the Philadelphia Jazz Project; Retro Love, the Kimmel Center Jazz residency; and Jazz Bridge Philadelphia. She created the choral arrangement of her own composition, "Standing Up," for an all-female ensemble, the esteemed Anna Crusis Feminist Choir. In 2009, she organized and hosted the Philadelphia Jazz Summit, which featured outstanding guitarists from many different genres and lasted 10 years.

Of all her albums, she told me, her favorite was “Time for a Change,” which originally was released in the mid-1970s.

“She was amazing, so caring and talented,” Sudler’s friend Gloria Rohlfs, of Mt. Airy, said last week. “She was the first musician I heard when I moved to Philly in 1989, a woman guitarist, inspirational.”

Sudler is survived by her brothers, Truman and Duane; her sons Erik and Lemar Honesty, and three grandchildren. A viewing will be held Saturday, Sept. 3, 9 to 11 a.m., at First United Methodist Church of Germantown, 6001 Germantown Ave.