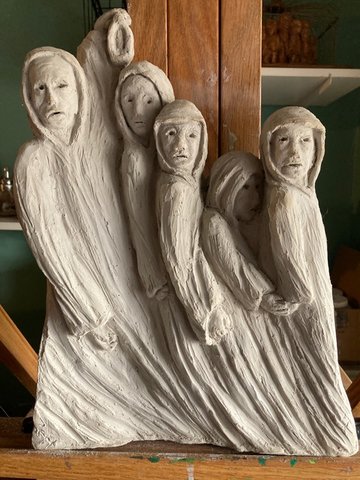 “Buildings along San Marco were broken. The street was scarred with craters and littered with rocks of all sizes. Dust, like thick fog, hung over everything ... Angelo pulled his mother out of the house and dragged her along as he ran. I stood staring in horror at the thing wedged within the ruins that looked like the carcasses hanging in butcher shops.”

This passage in Germantown sculptor and teacher Lori Zett's autobiography took place in June 1944, in Trieste, a seaport city in Northeastern Italy whose residents were subjected to bombing by Allied forces in late World War II. The gripping 250-page autobiography, which she has worked on sporadically for 35 years, remains unpublished.

But her artistic work is available for all to see. Her clay sculpture called “Give Peace a Chance,” which represents the horrors of her childhood experiences, is now on display at the current show at Mt. Airy Art Garage.

Her art is the way she processes all her sadness, she said. And it’s turned out to be the best form of therapy.

“But doing sad work does not mean I am a sad person,” she told the Local in her home studio, surrounded by her work. “It gives me a way to express sadness without having to dwell on it.

“Sometimes, when I am sculpting, I forget about everything else - even eating,’ she said. “I am all-consumed. That is the best part of creative work.”

Zett was almost four years old when the bombs started dropping, destroying her family's house and marking the start of what would turn out to be a life full of challenge and hardship.

Her father, a linguist, was conscripted into the Italian army, where he was anonymously accused of being anti-fascist, condemned, and demoted.

“He joined the paratroopers and was supposed to go behind enemy lines and kill secretly,” Zett said. “But he was a poet, not a killer. He killed himself in February 1943.”

This prompted her mother, who had earlier pleaded with the authorities not to execute her husband - when he was found guilty of possessing books by the forbidden historian Benedetto Croce, as well as private writings of his own criticizing the government - left her two daughters in the care of their grandmother and headed south to her own mother.

Then, in September, Italy surrendered to the Americans.

Eventually Zett’s grandmother, her father’s mother, placed the two girls in an orphanage. Then, in 1948, five years after the father killed himself, the grandmother collected both girls and left Trieste for the United States, where they settled in Union City, NJ.

Once they were adults and had children of their own, they started looking for their mother. And in 1960, with the help of a refugee agency, they discovered what had happened to her. She had been detained in a refugee camp in Rome, and resettled in Venezuela.

“We found out her address and wrote to her,” Zett said. “And she came to see us. It was strange at first. I was relieved that she didn’t exactly grab and hug me. But, after a while, I liked her very much. She was very sweet, well read, and beautiful. Not afraid of anything.

“She later told us that when she heard there was a letter for her with our names on it, she ran so fast to go and get it that she tripped and fell three times.”

It turned out that her mother, who lived until 2004, had married a man she met in the refugee camp. They went to Venezuela in 1950, where they wound up running a restaurant and having four children. “The marriage ended when he started drinking too much,” Zett said. “She was trained as a tailor in Italy, and to support her children, she made uniforms for the army, working for 36 hours straight.”

In 1968, Zett took her own trip to Venezuela where she found success as an artist – as well as true love. She didn’t marry but did start a family. Her son was born in 1972.

During this chapter of her life she pursued her art, and eventually began showing her work at shows around the world, including Budapest, Bulgaria, Yugoslavia and Venezuela.

For the sake of her son, she said, she eventually felt that she had to come home. Her partner did not come with her.

“We left Venezuela because I wanted my son to have an American education, and the kind of future he could only have in America.” she said. “My son's father is a wonderful man, and a great father. But he was an important person there, and he would have been nobody here.”

Since her return, Zett has spent much of her time as a teacher. She went back to school in 1992, enrolling in Temple University at age 52, graduated in 1996 as a political science major, then got a master's degree in international affairs at Columbia University. From 2002 to 2019 she taught in the School of Liberal Arts at Temple University.

Zett’s work is included the current MAAG show “Lifeblood” at 7054 Germantown Ave., which began Feb. 6 and runs through March 18.

For more information, call 267-240-3302 or visit mtairyartgarage.org. Len Lear can be reached at lenlear@chestnuthilllocal.com