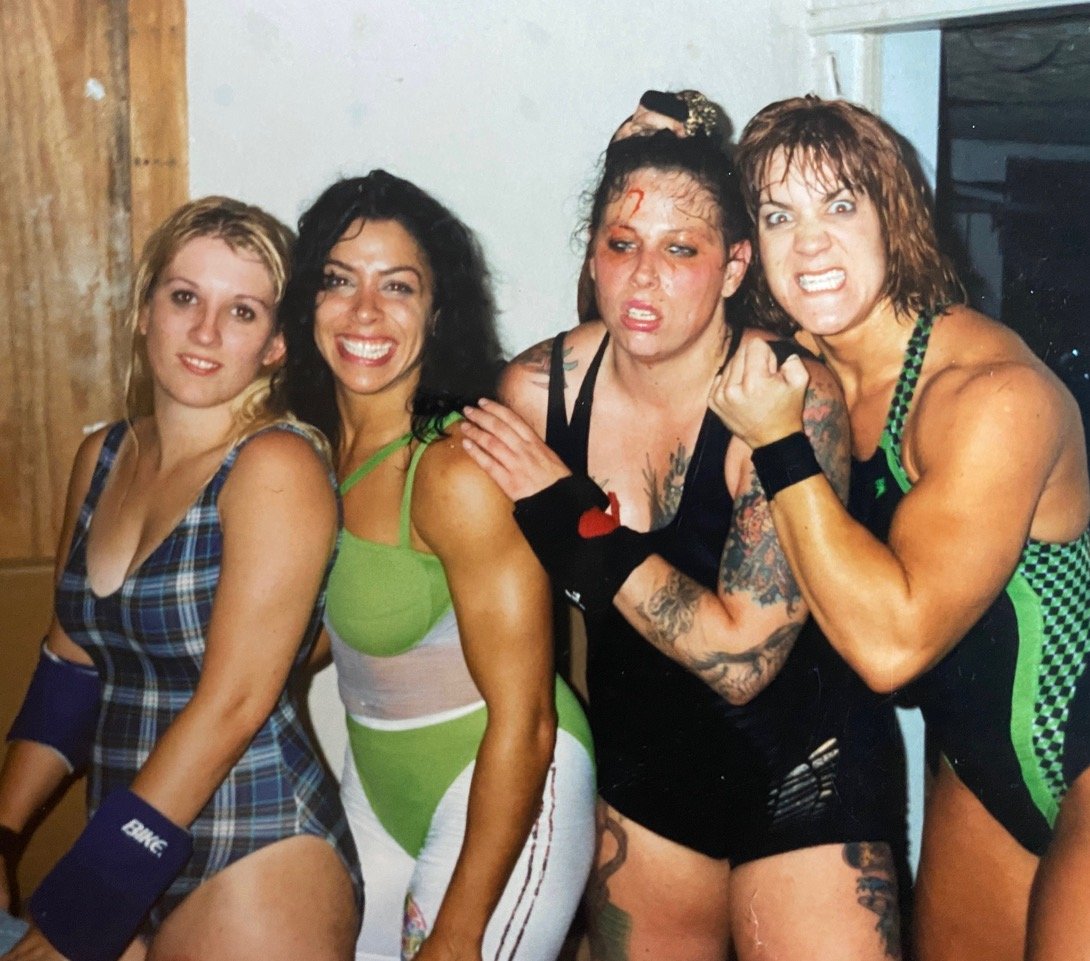 Heather Gray (far left), whose wrestling moniker was Heather McMasters, is seen with some of her wrestling buddies — Riptide, Psycho Sybil and Joanie (Chyna). 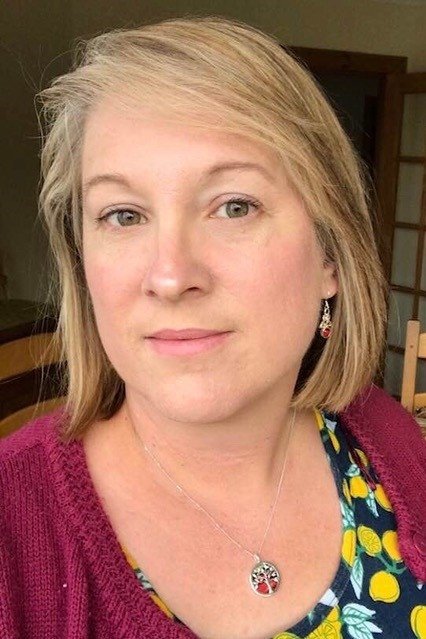 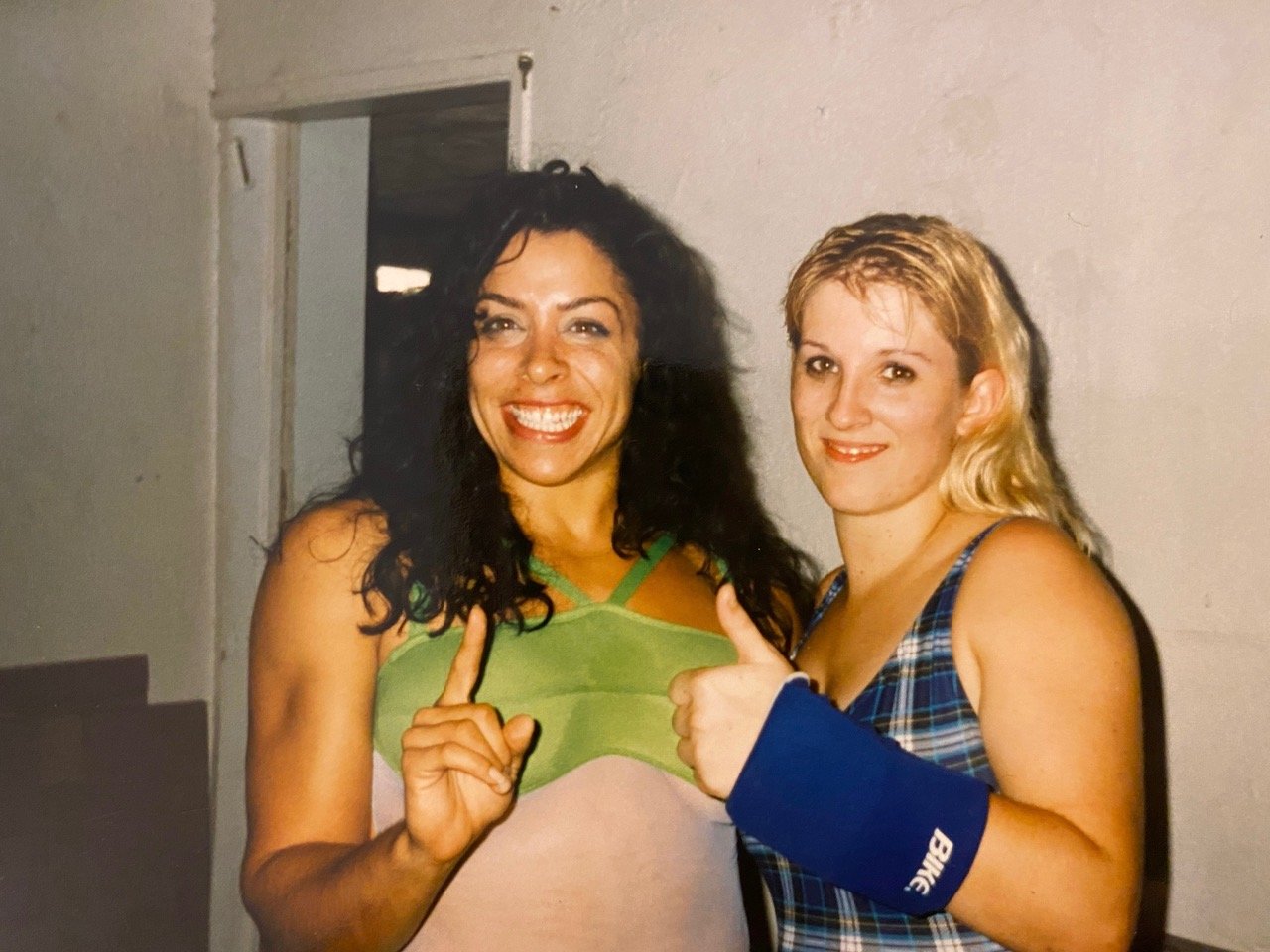 Heather (right) is seen in 1997 with Angel Orsini, who wrestled professionally under the name Riptide. 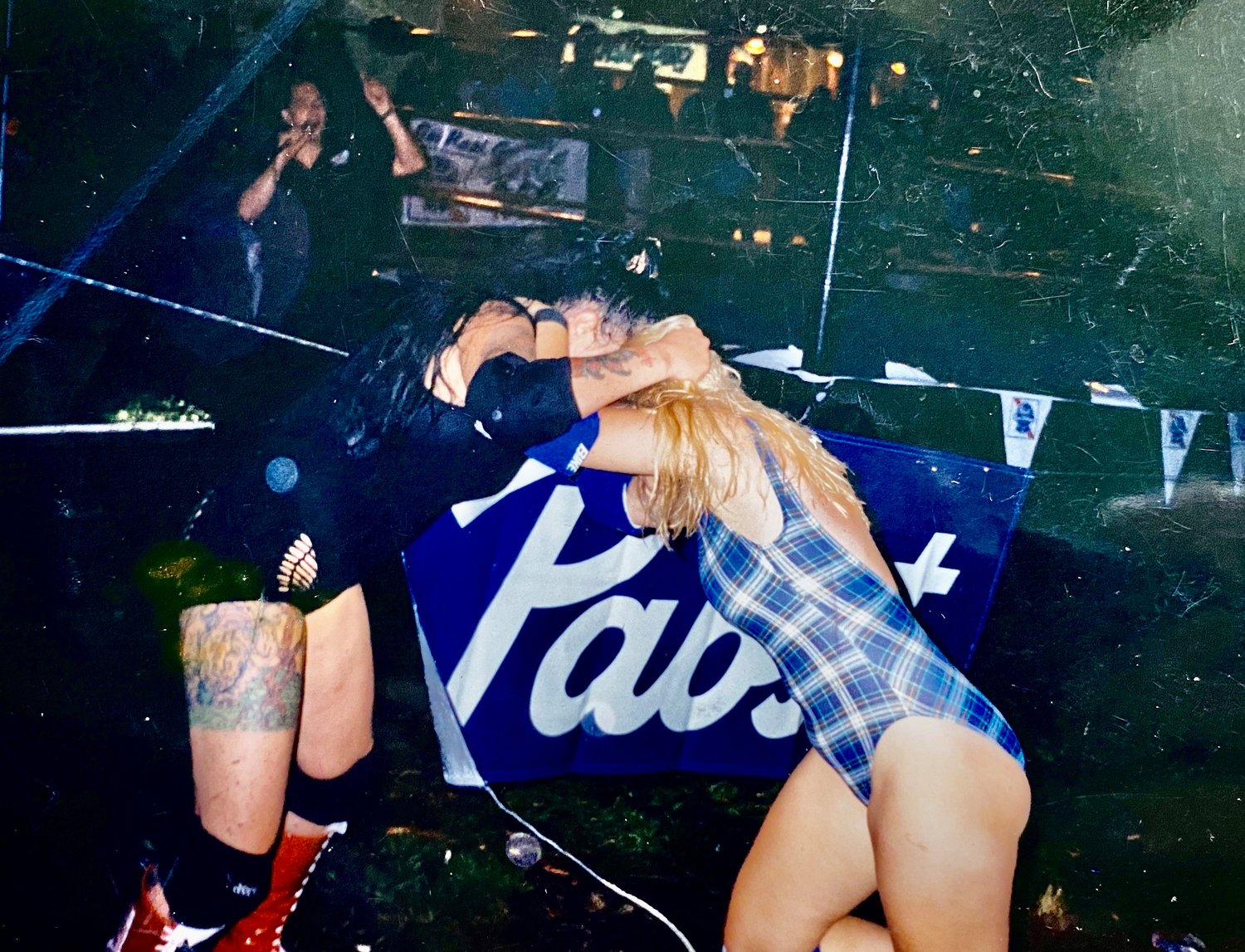 Heather (right) wrestles against a “heel” (villain). The matches may have been scripted and the winners planned in advance, but the serious injuries were real.
Previous Next
Posted Thursday, August 18, 2022 12:00 am
by Len Lear

Heather Gray is a sweet and soft-spoken Chestnut Hill resident who left her job in June as the Chestnut Hill Community Association's director of marketing and communications to work for Comcast in “knowledge management.”

Nothing very unusual so far. But many former co-workers and neighbors will no doubt be surprised to discover that this doting mother previously had a job that was as different from her recent occupation as horseshoes are from horseradish.

Gray was once a professional wrestler - a brutal job that leaves many of its practitioners as damaged physically and mentally as are many former professional football players (and with a lot fewer benefits). So she has a particular interest in the fact that several weeks ago, World Wrestling Entertainment announced that its flagship event, “Wrestlemania 40,” will be held at Lincoln Financial Field on April 6-7, 2024. “That's a really big deal,” she said.

Wrestling under the name Heather McMasters, Gray was a “baby face” (hero) fighting against “heels” (villains). In her short career, she wrestled in four matches, which drew 200 to 500 paying customers each.

For those who don’t already know, professional wrestling isn’t genuine physical combat. It’s designed to be an entertainment experience in which no one actually gets hurt.

“You are a stuntman and actor,” Gray explained in a Zoom interview last week. “You are trained to do the stunts safely, but things happen when you do them for real, and the cooler moves are more dangerous.”

But people do sometimes get hurt, and the sport can take a serious toll, Gray said. She knows this firsthand, after watching two of her former colleagues die from opioid addiction.

“They got hooked on painkillers, which they took because of all the injuries,” Gray said.

For her, that cost was too high. She decided to leave the sport before she got seriously hurt.

“I had my 15 minutes of fame, and that was enough,” she said. “I was good at it, but did not think it was for me. Too dark and sketchy. Your body gets wrecked.”

According to Gray, most fans realize that the action in professional wrestling is scripted. So they don’t see how real the injuries can be.

“There are ways of lessening the danger, like you just miss a punch and hit your chest to make a sound,” she explained. “But you can't eliminate the danger. One girl dropped me on my head. I heard a bad sound in my back. I was afraid to move.”

Turned out she was OK. But she might not have been. In wrestling, you need to be able to really trust your opponent - and “not everyone doing this is completely stable,” Gray said.

There was also the issue of money, which wasn’t great unless you were drawing huge crowds, because you get paid based on the size of the audience.

“I didn’t really care about that - I just wanted to do something fun and exciting, and it was fun working with the other women,” Gray said. “But none of the women I knew had a good ending.”

Born in Texas as Heather Chaney, the Chestnut Hill resident and her family moved to South Florida when she was five years-old.

Her stepfather taught karate, and she became his star student. She also taught self-defense when she was working towards her black belt in karate.

She was in musical theater in her small private high school and joked that she "picked up wrestling on the streets” by the time she saw a newspaper ad for women wrestlers back in 1997. She  was intrigued.

“I figured what the heck - I like theater and adventure and karate, why not try it?,” she said. “About 20 to 25 women tried out, and they kept seven. I was the only one who had wrestled before.”

The wrestling center was in Royal Palm Beach, Fla. Newcomers learned moves like how to put someone in a headlock, or a full nelson, or fold opponents into a small package. “And we learned to fly off the ropes,” Gray said. “I was actually good at that.”

Gray was set to go on the road and spend time on tour in Japan when she slipped while wrestling outdoors in the rain and tore all the ligaments in one ankle.

The self-described “prima donna” could have gone back to wrestling after recovering from the injury, but decided not to.

And that’s when she moved on to the next chapter in her career.

She was hired as a sports writer and web producer by CBS Sportsline, where she covered professional wrestling for three years. She went on to interview many wrestlers and watch many (“in fact, too many”) hours of the sport.

That’s also when she met her husband-to-be, Brian, who was also working for CBS.

In 2011 they moved to Philadelphia and Chestnut Hill with their daughter, Zoe, now 21.

And six years later, she took yet another professional turn and earned a degree in women's studies with a minor in game design from Goddard College in Plainfield, Vermont.

Why is it that only one CHCA co-worker knew about this fascinating part of Heather's background?

“I don’t mention it unless there is a natural reason to,” Gray said.

And how many times do people just happen into conversations about pro-wrestling?

“For most people my stories won’t be that fun,” she said. “But if you do know wrestling, then my insider stories are pretty entertaining.”