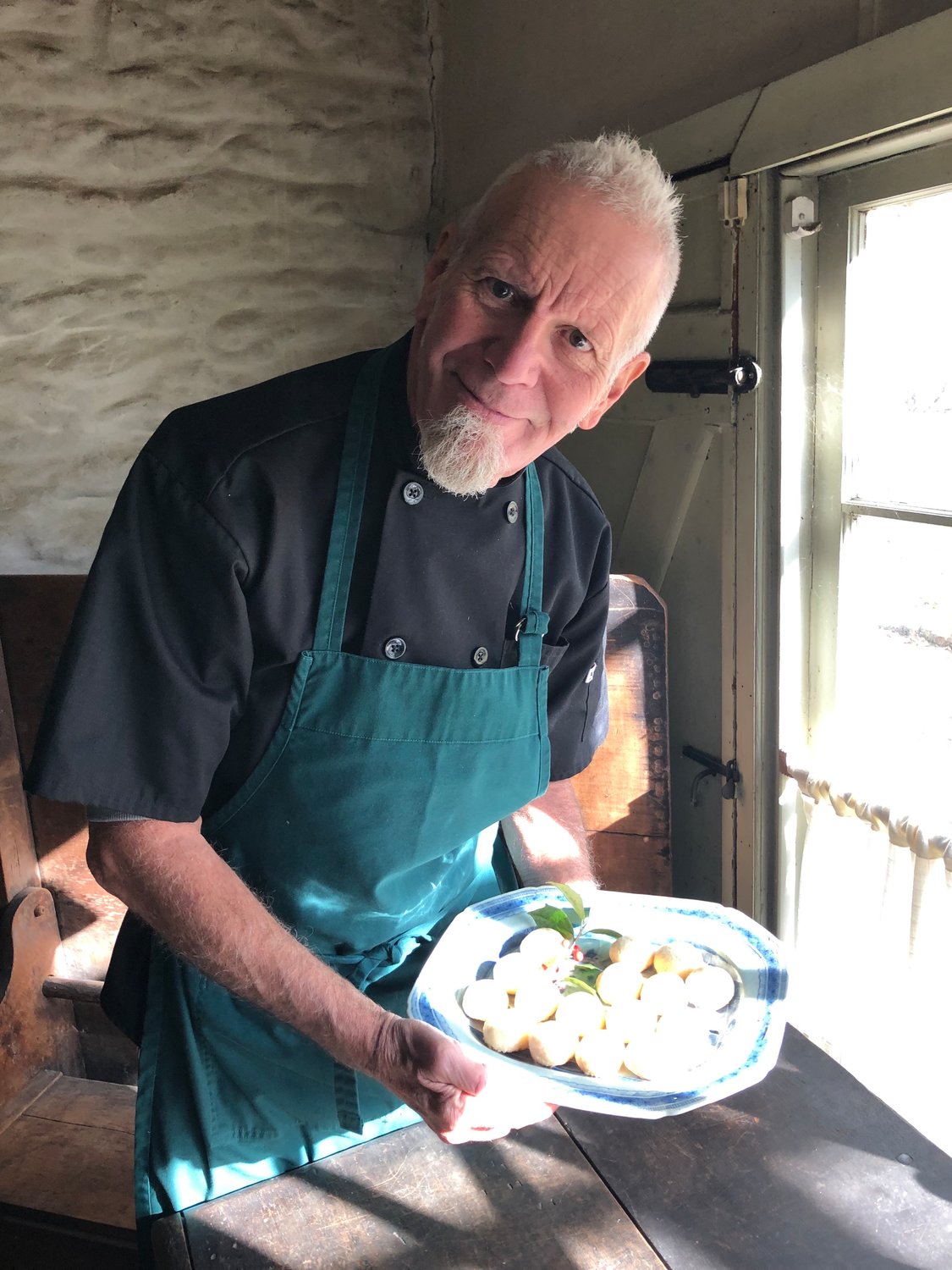 At the Wyck house, culinary historian Gregory Funk shows off a plate of tasty almond “mackaroons” that he made after updating a recipe from the Hannah Marshall Haines receipt book dated 1811-1824. 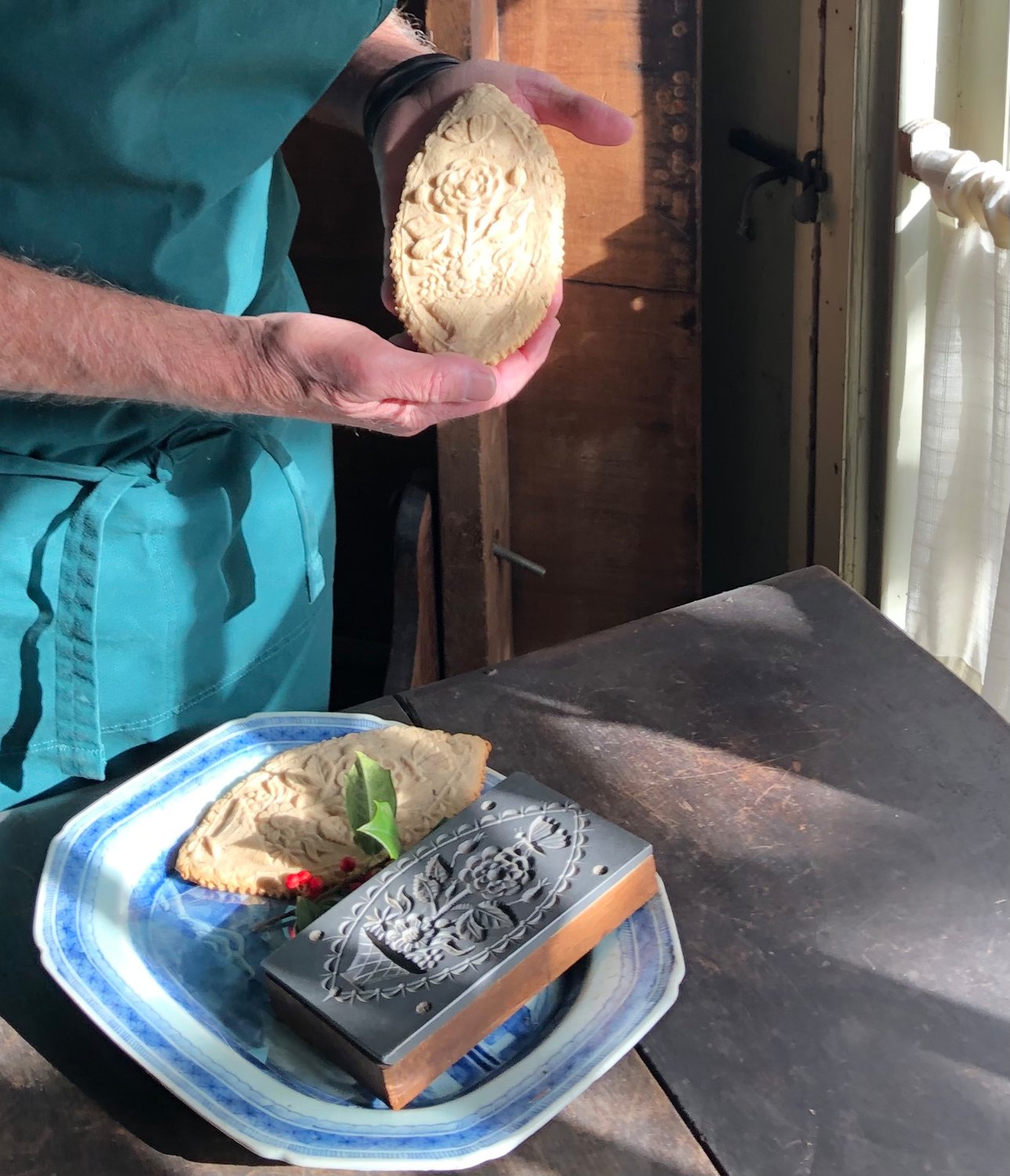 Close up of the New Year’s Cake that Gregory Funk made after updating several recipes from the Wyck house dating back to 1810. The mold is a reproduction of the form that the family used to make the holiday special “cakes.” 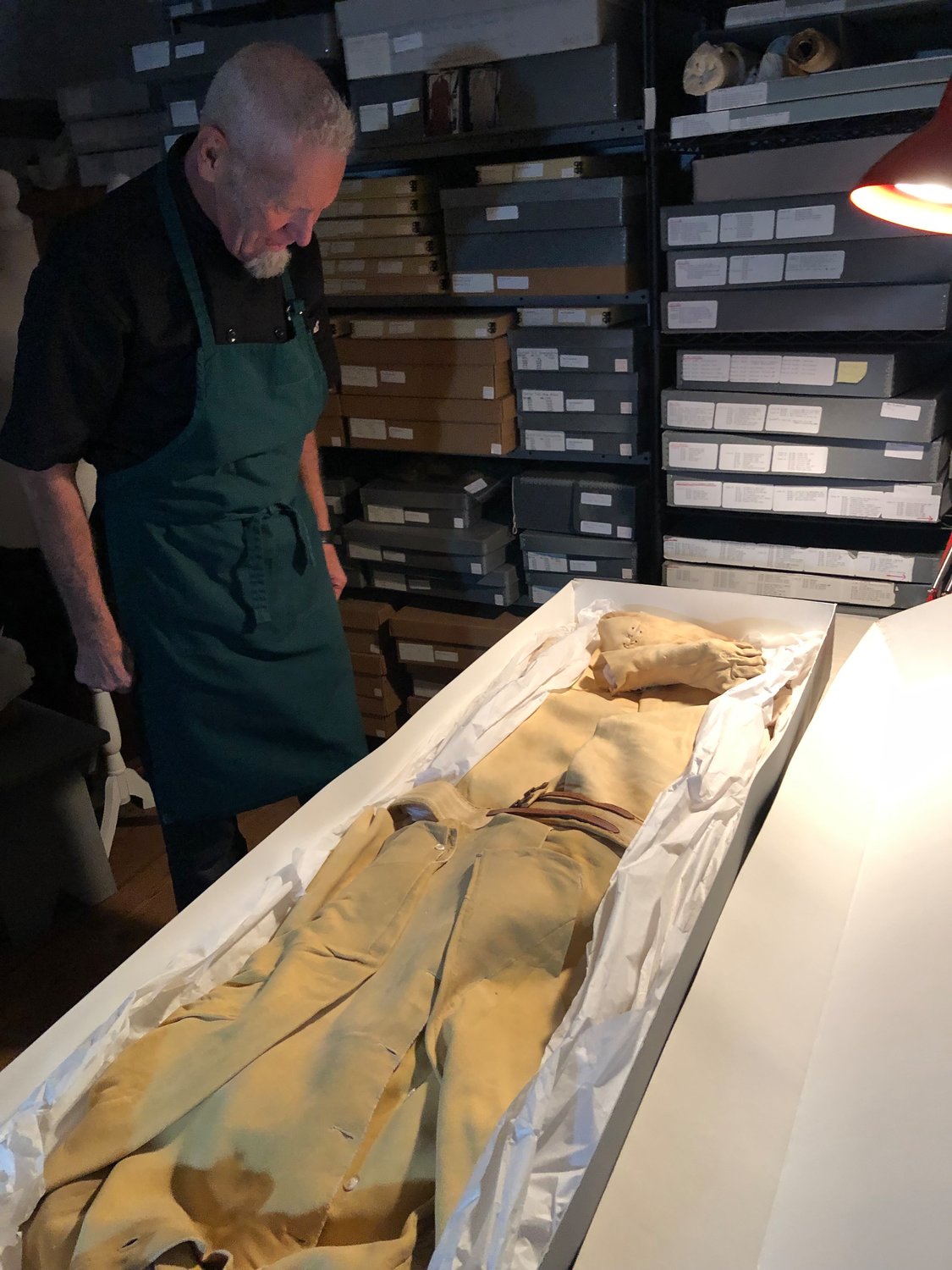 Gregory Funk looks over the “nature suit” that Reuben Haines III (1786-1831) wore to collect specimens in the Wissahickon. One of thousands of artifacts in the Wyck collection, it is fabricated entirely of buckskin and in excellent condition. 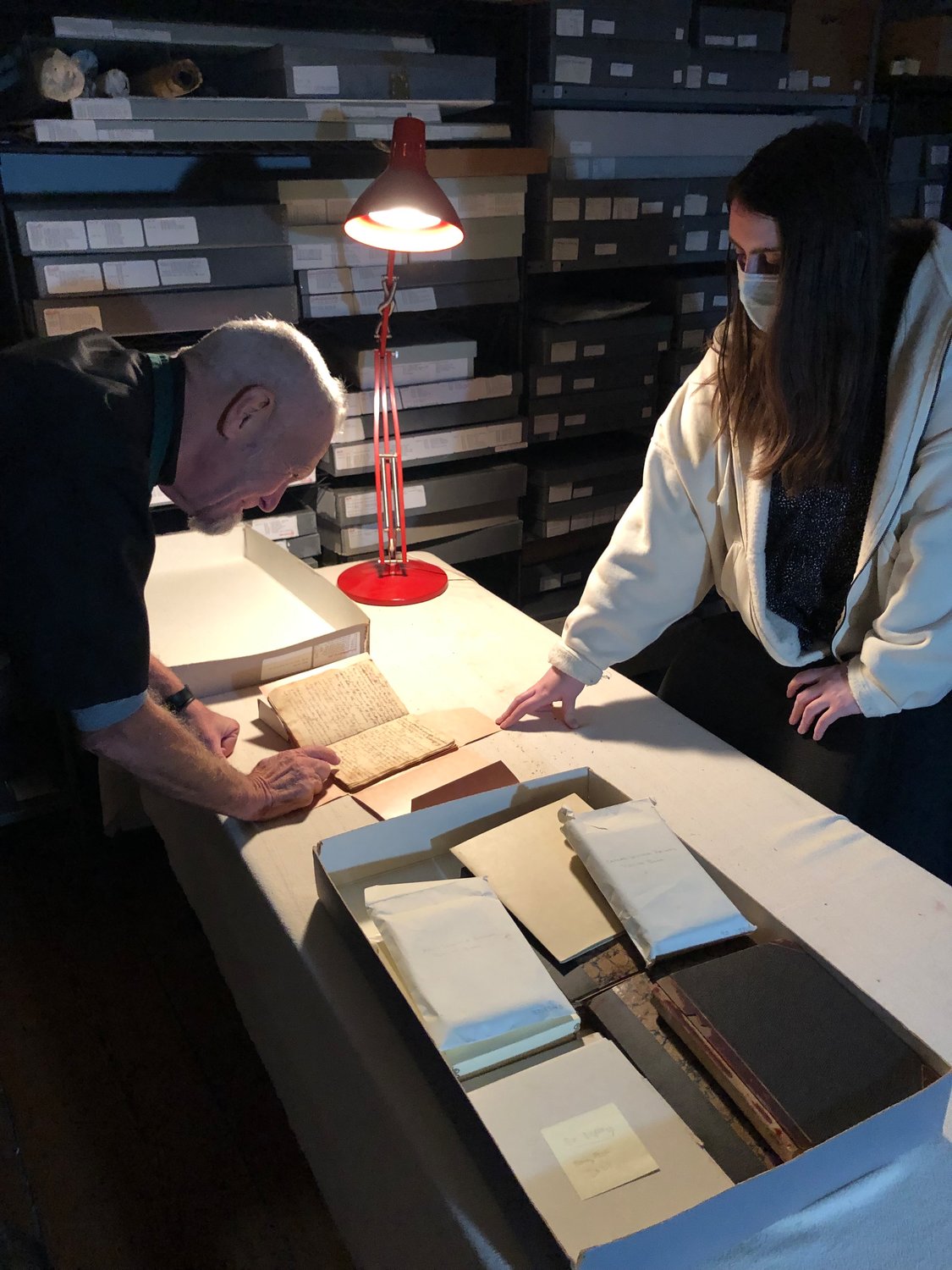 Culinary Historian Gregory Funk and Cara Caputo, Wyck’s Manager of Interpretation and Outreach, read from one of the oldest receipt books in the collection, that of Hannah Marshall Haines, dated 1811-1824.
Previous Next
Posted Thursday, December 16, 2021 12:00 am
by Barbara Sheehan

Is there a member of your family who collects recipes and adds notes to the directions such as “use less sugar,” “turn down to 350 degrees after first 30 minutes,” or  “skim milk works here?” Or perhaps there are notes such as “was a big hit at Thanksgiving dinner,” or “was a side dish at Mark and Lucy’s wedding.”

Imagine discovering notes such as these in a 200 year-old “receipt book,” complete with obscure handwritten instructions and lists of strange ingredients. That was the intriguing task that Mt. Airy resident Gregory Funk took on when he first responded to a call for volunteer docents at the Wyck Historic House, Garden, and Farm in Germantown.

Funk is a retired chef, and has worked at numerous restaurants and catering services, including almost a decade at the Frog Commissary in Philadelphia.  He is also a history buff and a gardener.   “I felt I had more to offer than telling people how old that chair was,” he explained.

He asked the director if the house had any old receipt books.  (“Receipt” was a term for what we now call a recipe.)  The director told him to wash his hands and led him to the archives, where a box full of centuries-old receipt books were stored.   What he discovered was both amusing and thrilling.

In terms of cooking, Funk said, “I was seeing things in these receipts that I had only read about in books.  There were no temperatures, no instructions.”

Funk said that after reading the recipes and reviewing the accompanying journals and letters, which dealt with the ways food was prepared and served on various occasions, “It was like peeling an onion - one thing just leads to another.”

Since that first session almost three years ago Funk has become a valued member of the team at Wyck, as both a volunteer and their Culinary Historian.  While a food historian deals with the movement of food through society, a culinary historian, Funk explained, studies “the craft that takes place in the kitchen - what happens in the garden and at the table.” Funk is a member of the Historic Foodways Society of the Delaware Valley, a local food history group.

Located at the corner of Walnut Lane and Germantown Avenue, Wyck is a National Historic Landmark and an exceptional resource for those interested in many aspects of life in Germantown through the last 300 years.  Nine generations of one family occupied the house from 1690 to 1973, and judging by the collection, they were very aware of the historic significance of the things they collected and activities in which they were engaged.

Wistar and Haines are the family names that would be most recognizable to residents of Northwest Philadelphia today.  They were Quakers and their lifestyles showed evidence of a commitment to education, horticulture, natural history, and preservation.

While the original family farm and properties took up a large part of what is now considered the Colonial Germantown Historic District, the current 2.5 acre property was established as an historic site in 1973.

Wyck boasts the oldest rose garden in its original plan in America, a collection of 100,000 family papers, and more than 10,000 artifacts and historical curiosities.  It has a working home farm with fruit and vegetable gardens, and provides an outdoor classroom for local residents.

All told, the Wyck is an understated mecca for the historically curious, and that certainly was the attraction for Gregory Funk.

Funk has been translating Hannah Marshall Haines’  (and her descendants') receipts into recipes that today’s cooks can reproduce in their own kitchens.

With diverse ingredients from the early 1800’s such as potash and saleratus and 200 year-old instructions that sometimes just list ingredients, it was a challenge that Funk couldn’t resist.

He shared the results of his most recent translation of what Hannah called “Mackaroons.” The original receipt book from 1811-1824 listed “Mackaroons: the whites of 3 eggs to twenty-four spoonfuls of sugar half a pound of almonds blanched, and pounded and two spoonfuls of rose water.”

The ingredients, although commonly found today, were different. Two hundred years ago, Funk explained, “Eggs were smaller, the almonds were chopped up, and sugar was different.” He used a Cuisinart rather than a mortar and pestle to break down the almonds and the sugar.  He tested varying quantities of rose water, which in the first batches, he said, made the cookies "smell like grandma’s hankie drawer.”  We were treated to the finished product, with just a suspicion of rose flavoring, which was delicious.  Copies of the final recipe are available at the Wyck house.

According to Funk, rose water appeared in a lot of colonial recipes because it predated vanilla, and the family made their own from roses grown in their garden.  “The rose garden,” Funk said, “was treated not only as ornamental but as a pharmacy. That was their drug store --the botanicals and the herb garden as well.”

Funk has tested and translated about two dozen of the historic recipes.

While the Wyck House is closed for the winter, the grounds are open year round. The staff and volunteers of Wyck use the winter period to develop programs, raise funds, and for Funk, test out more recipes.

Beginning in April, Wyck will offer a host of programs, including a series of Home Farm Foodways workshops.  In the past year, the Foodways Project offered free workshops in topics such as fermentation, tea making, and regional food history.

Funk has some provocative ideas for future workshops, including how to make salt-rising bread, the foods of the Leni Lenape, and growing, cooking, and preserving fruits and vegetables.

And yes, a cookbook is in the works, said Cara Caputo, Wyck’s Manager of Interpretation and Public Outreach. “We want that cookbook,” Caputo said, “along with the stories of the family to accompany the recipes.”

Fourteen different recipes for New Year’s Cake exist in receipt books at Wyck, dating back to 1810.  Each generation adjusted the recipe to reflect baking science and personal taste. This interpretation has been used for large gatherings at Wyck and makes enough for about 50 people.

To make dough: Put butter in a large bowl to soften. Add sugar and combine with a mixer until creamy. In another bowl sift flour, baking soda, cream of tartar, cinnamon, and nutmeg. Add caraway seeds to sugar and butter. Work the dry ingredients into the batter alternately with the sour cream. The batter will get too stiff for a wooden spoon, switch to your hands and finally turn all onto a board and knead in the rest of the flour. Ripen the dough overnight by wrapping up and placing in the refrigerator.

To bake: As you likely don’t have an antique cake mold, let’s continue with little cake forms (cookie cutters or any cookie print or springerle mold can be experimented with). Preheat the oven to 375° F. On a floured board, roll dough to ¼ inch thickness and cut with a cookie cutter. Place on a lightly greased sheet pan ¾ inch apart. Bake the cakes for 10-12 minutes or until pale golden on the bottom. Cool for 10 minutes then remove to the cooling rack. Store in a tin, they will ripen and taste better the next