Wyndmoor residents Richard Abraham and Joel Gottfried are members of a very exclusive, welcoming and friendly group that, in their own words, “you would not ever want to be a part of." 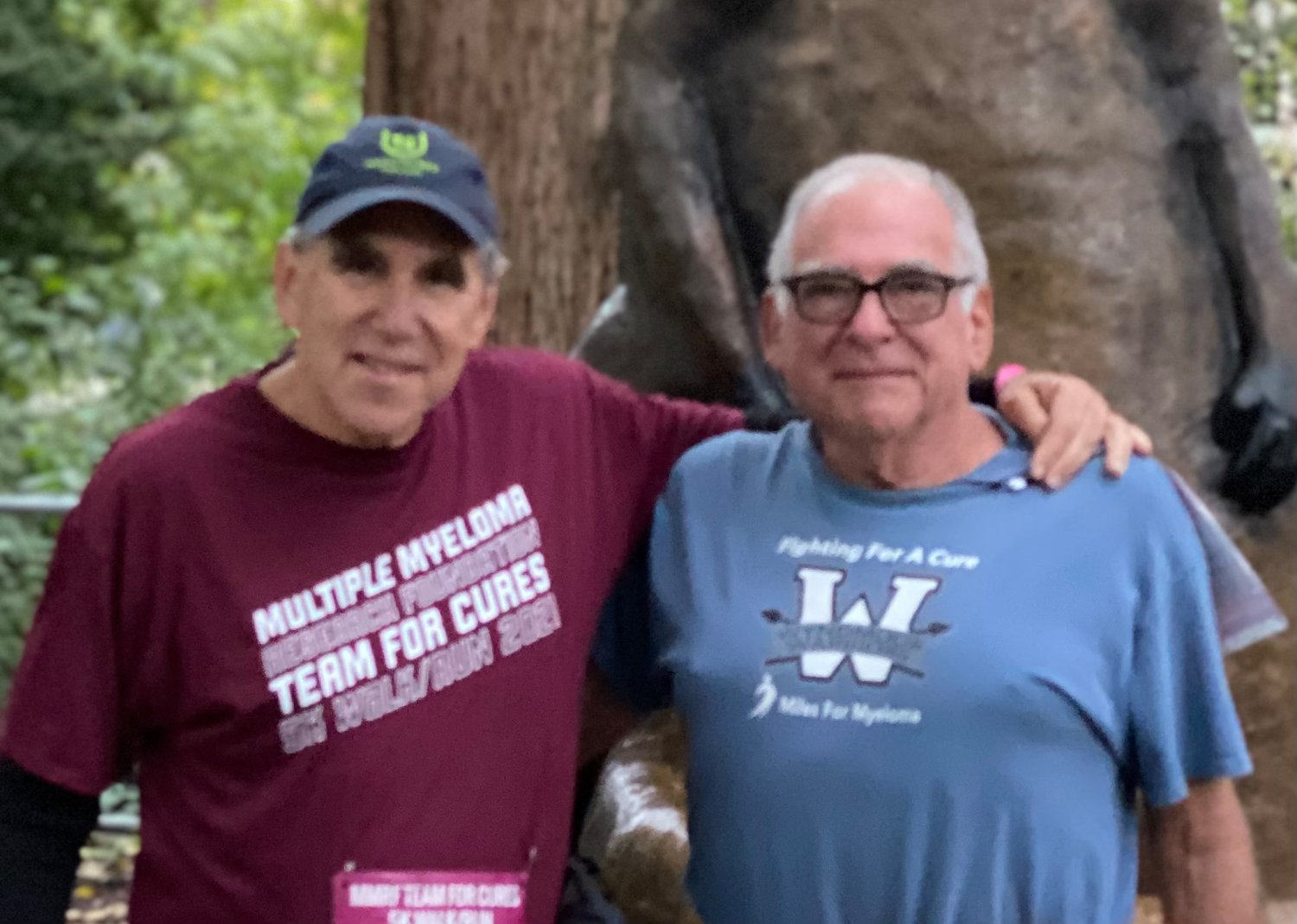 Joel Gottfried (left) and Richard Abraham, of the Wyndmoor Warriors, are seen in October of 2021 at the annual fundraising 5K run to raise funds for the Multiple Myeloma Research Foundation.
Posted Thursday, October 13, 2022 12:00 am
by Len Lear

Correction: An earlier version of this article stated that Richard Abraham who spent 17 days in the hospital for a bone marrow transplant.  That patient was Joel Gottfried.

Wyndmoor residents Richard Abraham and Joel Gottfried are members of a very exclusive, welcoming and friendly group of people that, in their own words, “you would not ever want to be a part of.”

The two men, along with 50 of their fellow group members, share a rare cancer diagnosis. They have multiple myeloma, a blood plasma cancer found in bone marrow, which is a vital part of the immune system.

To cope, the members of the Philadelphia Multiple Myeloma Networking Group,  (PMMNG) meet to share information, and to encourage and support each other. They also want to raise awareness and funds for research.

On Saturday, Oct. 15, Abraham and Gottfried, who are in their 70s, will be among the 30,000 people across the country who will join together to help achieve that goal. They will participate in the Multiple Myeloma Research Foundation’s annual 5K Walk/Run. The Philadelphia event will be in Fairmount Park, starting at Memorial Hall at 8:30 a.m.

“It is very, very important for patients with multiple myeloma to support each other and help keep all of our spirits up,” Abraham said. “We have so much in common, and we all understand each other because we know what the other members are going through.”

In 2017, Abraham, a lawyer, and Gottfried, a computer expert, met three other Wyndmoor residents who also had been diagnosed with multiple myeloma. Together, the five men decided to form a special group and call themselves the Wyndmoor Warriors. They met often for breakfast and conversation at Cake in Chestnut Hill.

Five multiple myeloma patients in Wyndmoor is a remarkable coincidence, given that the disease is so rare and the municipality so small.

Two of the five, who were in their 60s, have since died. And the third is “not in very good shape,” so the group is essentially back down to two.

While he wouldn’t wish the disease on anyone, Abraham said last week that the pair would be happy to welcome new members with whom they could share and show support. “If there are others with multiple myeloma who read this article and live in or near Wyndmoor, Chestnut Hill and Mt, Airy, we hope they will reach out to us,” he said.

Gottfried discovered in 2017 that three-fourths of his bone marrow cells were cancerous, so he needed a stem cell transplant.

“The stem cells are harvested out of your body and frozen,” he explained. “Then the doctors kill all of the bone marrow cells, which leaves you with no immune system, and then they put in the stem cells. I was in the hospital for 17 days and felt horrible for an entire year. It was so brutal.”

But in the end, Abraham said, he was fortunate. While he visits the University of Pennsylvania Hospital's Abramson Cancer Center's satellite facility in Valley Forge monthly for treatment, so far it seems to be working.

“The drugs have kept it in check, and the myeloma is barely evident now,” he said. “I'm in remission.”

“My wife, Stephanie, and I have truly returned to the original mantra of our relationship: 'Shame on you if you don’t enjoy every day!'” he said.

Gottfried, who trained at the Massachusetts Institute of Technology and University of Pennsylvania, and the author of “Who's My Daddy: A Tale of DNA Surprises and Discovery,” a book about the search for his biological father, did not know Abraham until they were both diagnosed in 2017 and met in the support group.

“Our disease is not curable,” Gottfried said, “and the previous drugs I took had serious side effects, and caused kidney problems. But the ones I take now are magic. No side effects.”

And there have been enormous strides in treatment possibilities. A decade ago, a person who was diagnosed with the disease could not reasonably expect to live longer than three to five years. Today, that range is closer to five to 10 years.