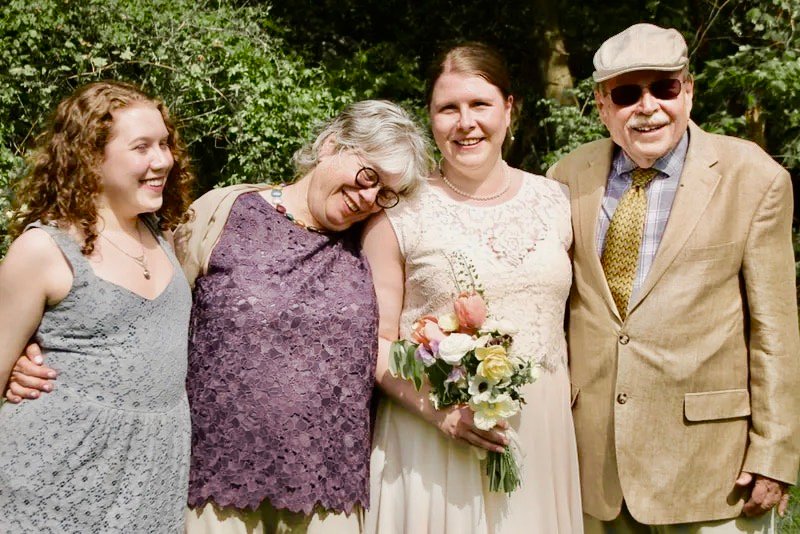 Dr. Grady stands with his family, from left, daughter Constance, wife Sue, and daughter Laura. He liked to discuss Shakespeare and talk about the power of words.
Photo courtesy of the family
Posted Thursday, June 16, 2022 12:00 am
by Len Lear

When I was an undergraduate student at Muhlenberg College in Allentown, English professor, Dr. Harold Stenger was a legendary teacher of Shakespeare plays. He acted out all the roles, including the female characters, with different accents and unbridled passion. Even students with no interest whatsoever in Shakespeare — accounting majors, chemistry and sociology majors — fought to get into his classes and were crushed when they were rejected because the classes filled up so quickly.

When I learned last week about Hugh H. Grady Jr., a Wyndmoor resident for 19 years (and Germantown for 18 years before that), I could not help but think about Dr. Stenger. A preeminent Shakespearean scholar at Arcadia University with a global reputation in academia, a prolific author and editor (curriculum vitae of almost 5,500 words) and former political activist and community organizer, Dr. Grady died Sunday, May 8, of acute myeloid leukemia at University of Pennsylvania hospital. He was 74.

“Hugh was a giant in his field,” wrote Garland Deen McInnis on the West Laurel Hill Funeral Home website. “Hugh and Sue Grady were also outstanding VISTA volunteers in Houston in 1969 and '70. Myself and many other volunteers were lucky to meet with them a few years ago at a VISTA [Volunteers in Service to America] reunion.”

“He was great at heart,” wrote Gayle Greene, a Shakespeare scholar at Scripps College in Claremont, CA. “I hope there is a Zoom memorial. I'd like to attend. So would dozens of other Shakespeareans.”

Dr. Grady won Arcadia’s Ellington Beavers Faculty Award for intellectual inquiry in 1990 and 2004, was professor of the year for 2001-02 and was awarded a 2004 summer research stipend from the National Endowment for the Humanities.

Born in Savannah, GA., where he volunteered for the NAACP as a teenager — a courageous thing to do at that time in the deep South — Dr. Grady graduated from Benedictine Military School and earned a bachelor’s degree in English from Fordham University. He went to Paris for his junior year of college. After seeing the almost daily student demonstrations there against the Vietnam War and capitalist excesses, he became active in Fordham’s chapter of Students for a Democratic Society, and supported progressive policies for the rest of his life.

“We were both involved in civil rights and anti-war (Vietnam) movements,” his wife, Sue, told us last week. “We were VISTA volunteers in the Houston area and in community organizing. Hugh taught in a Black high school for one year. Then we moved to Austin which was paradise if you didn't have money. Grad school was only $1500 for a semester. We were involved in the Bread & Roses School for Socialist Education for two to three years.”

Sue Wells, a native of Poughkeepsie, NY, met Hugh when both were English majors at Fordham. Sue and Hugh, who were married for 53 years, came to Philadelphia in 1985 when Sue was hired by Temple University, where she focused on teaching writing and rhetoric until her retirement in 2017.

Hugh taught at Temple for two years, then at Arcadia until his retirement in 2014. Their two daughters, Constance and Laura, went to the Henry School in Mt. Airy.

Starting in 1987, Dr. Grady taught undergraduate and graduate courses in writing, literature and contemporary critical theory at Arcadia. His classes were memorable, according to numerous former students and faculty members.

Dr. Grady, who also played acoustic guitar and would discuss “Paradise Lost” as he and Sue did the dishes, earned his Ph.D in English and Comparative Literature from the University of Texas at Austin in 1978, edited four Shakespeare anthologies, wrote several monographs on John Donne and Shakespeare, wrote or co-wrote 65 articles in scholarly publications, 14 reviews of other professors' writings on Renaissance literature and delivered more than 70 academic research papers in countless cities and countries. He chaired dozens of seminars and consulted on many book proposals.

“Hugh's last book was on the relationship between art and politics, pointing out that art can be a political force,” Sue said. “That was important to him ... He would always stand up for what he believed in, but he was friendly to anyone who was friendly to him. This is a hard loss, but talking to you for this article is one thing I can still do for him.”

In addition to his wife and daughters, Dr. Grady is survived by two grandchildren, three sisters and other relatives. Services were held May 15 and 26, and there is a memorial page on Facebook. Donations in his name may be made to the Leukemia and Lymphoma Society, Donor Services, P.O. Box 22324, New York, N.Y. 10087.