Despite vast local oppositionand a plan that doesnot conform to existingzoning, the Philadelphia ZoningBoard of Adjustments voted June30 to approve a four-story apartmentbuilding at 6717 ChewAvenue, … 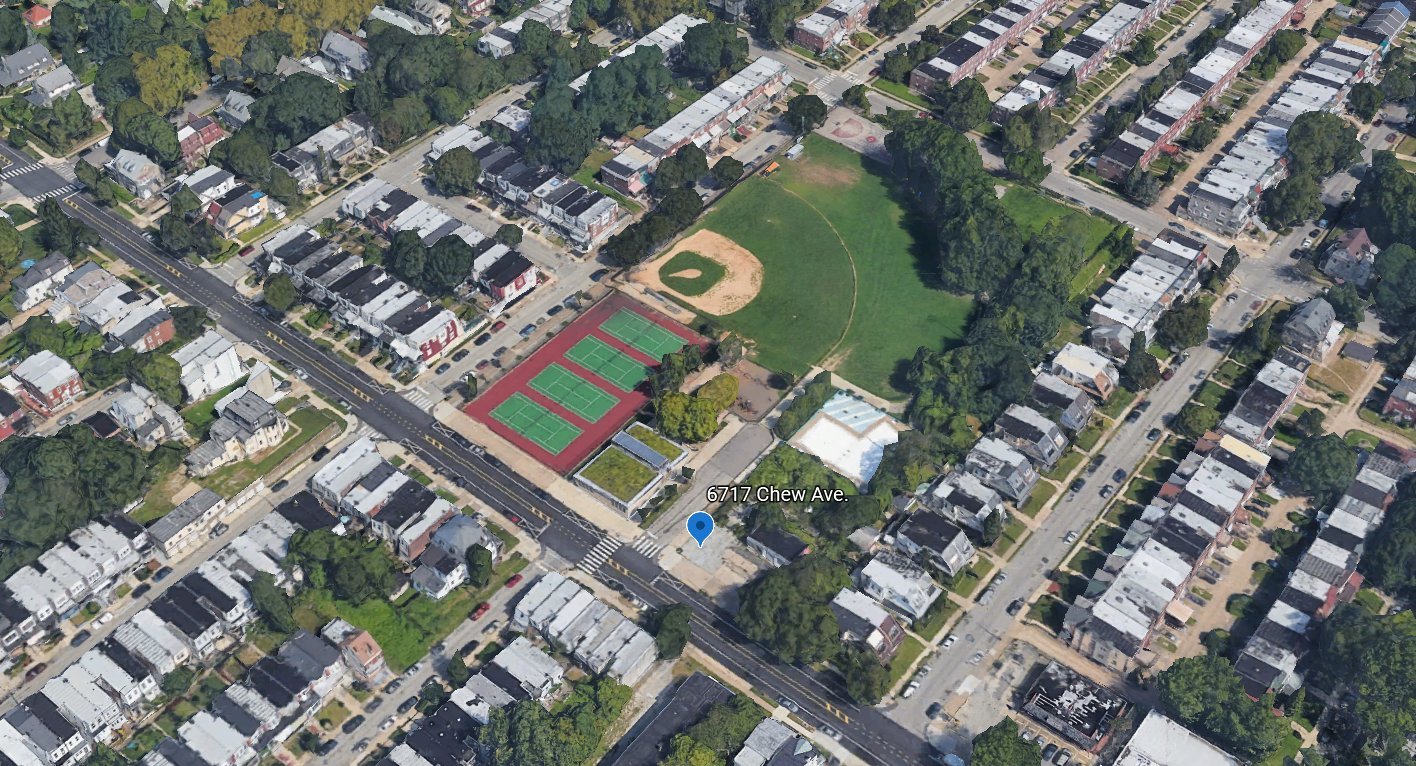 A Google Earth image shows 6717 Chew Ave., the location for a proposed development that was approved last week by Philadelphia’s Zoning Board of Adjustments.
Posted Wednesday, July 7, 2021 10:00 am
by Patrick Cobbs

Despite vast local opposition and a plan that does not conform to existing zoning, the Philadelphia Zoning Board of Adjustments voted June 30 to approve a four-story apartment building at 6717 Chew Avenue, at the corner of Pleasant Playground, clearing the way for the controversial project to go forward.

The 33-unit building will bring additional traffic to the corner of Slocum Street and Chew Avenue, a crossing known for speeding cars and seasonal foot traffic from park-goers. The crosswalk there has had at least six accidents since 2010, one a fatal vehicle-versus-pedestrian collision, according to PennDOT data.

“I feel very very strongly in opposition to this project,” Eighth District City Councilmember, Cindy Bass, told the ZBA. “Cramming in this number of units in this site I think is detrimental to the quality of life of the [existing] residents… [It] will be right up against a swimming pool where residents of this unit will be able to overlook onto the pool and potentially watch those children, families, whoever… I do have a safety concern.”

Bass joined a long list of local residents who expressed stringent opposition to the project. The developer, Audax Builders of Doylestown, was requesting zoning variances because the residential project was out-of-line with existing zoning on the site, which is zoned for commercial use only.

Yet, despite all this opposition and the zoning conflict, the project was approved anyway. Why?

The developer’s zoning lawyer, Hercules Grigos, or “Herc,” as acting ZBA Chair Carol Tinari called him in the first half of this hearing last month, claimed environmental cleanup costs due to underground fuel tanks on the site from an earlier use as an auto repair shop combined with failing commercial prospects on Chew amounted to a hardship that only this unpopular, non-conforming, higher-density, residential use was able to solve.

Yet Stephanie Heimann, lawyer for the neighbors, pointed out that new commercial ventures, like a coffee shop across the street from the site, are underway now on Chew, suggesting commercial uses are viable there. And she pointed out that the cleanup costs, which the developer estimated at more than $350,000, were not required, but voluntary under the state’s Act 2 laws governing this lot and that such cleanup costs were already factored into the reduced price to buy the lot, thus diminishing any financial hardship.

The ZBA has been criticized in the past for over-approving zoning variance requests (greater than 90% approval rates in some years), sometimes apparently favoring developers over neighborhood desires. City Council has taken aim at the ZBA with its Zoning Code Review Commission, introduced in January, to refocus the priorities of the ZBA. But, possibly, Tinari and the two other ZBA members who voted with her were simply following City Planning.

“The City Planning Commission recommends the board grant the variance,” said City Planner, Ian Hegarty, at the hearing.

His reasoning? The apartment building resembles the kind of thing the Philadelphia 2035 Plan calls for as a future development goal for the lot.

The 2035 Plan is a street-by-street recommendation, finalized in 2018, for what should and should not be built all over the city. To manage growth in East Mt. Airy, this plan calls for 6717 Chew to eventually be rezoned from its current commercial use to multi-family residential.

Bass has criticized the Planning Commission and the 2035 Plan because of the increased density called for near Pleasant Playground and along Chew Avenue, commenting that the city planners who put the plan together don’t really understand some city neighborhoods. And she told the ZBA that the area did not need the increased density.

She said in a statement that while she is disappointed in the ZBA results, she will continue to work with neighbors to influence the development at 6717 Chew and to implement new policy changes that better serve the neighborhood going forward. She has offered to host a community meeting about reconsidering the recommendations for Mt. Airy in the 2035 Plan, but no such request has made its way to the Planning Commission, leaving that organization bound to the 2018 vision for the site.Neighbors have asked for the city to buy the lot because of its proximity to the park. They have asked for the developer to more significantly reduce the size and scope of the plans. But without an official call to review the zoning in this area, the ZBA and the Planning Commission were limited in their considerations— essentially asking: what’s better? A derelict, contaminated lot  next to a pool and playground, or a new, clean building that seems to satisfy future zoning priorities.