“Electile Dysfunction: Hindsight is 2020,” is Act II's sketch comedy at the Ambler theater fresh from the swing state of Pennsylvania and just in time for the madness and mayhem … 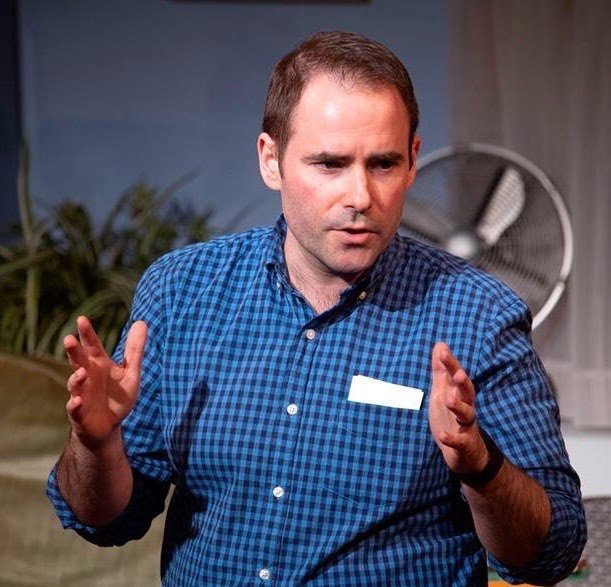 Will Dennis stars in “Electile Dysfunction: Hindsight is 2020,” a spoof of the presidential election.
Posted Thursday, November 5, 2020 9:55 am
by Rita Charleston

“Electile Dysfunction: Hindsight is 2020,” is Act II's sketch comedy at the Ambler theater fresh from the swing state of Pennsylvania and just in time for the madness and mayhem that is the current election season. Along with Act II's Artistic Director Tony Braithwaite, Tracie Higgins and Dan Matarazzo, Will Dennis — actor, writer, director and teacher — co-wrote and stars in the production that streams now through Zoom until the end of the year.

But the production is especially relevant now because of the highly divisive 2020 presidential election. Toward that end, Braithwaite and a shameless cast of characters skewer the political left, right and center in a virtual experience. Additionally, real voter interviews, pandemic parody, press conference puns and even a Trump vs. Nixon sing-off make for quite a comedy revue.

“We first did a version of this show four years ago,” Dennis explained. “At that time it was an opportunity to do a comedy sketch revue, sort of a variety show with the premise that we're in a world where all politics are fair game. There was also a great chance to laugh at the politicians as well as ourselves.

“So we always knew we wanted to do the show again in 2020. We were slated to do it before Covid hit, and everything changed for theaters everywhere. But rather than cancel show after show after show, we looked for an interesting way to do it. And so here we are today. “

Saying he often leans more towards the side of paranoia, Dennis, 37, admits he was a little skeptical about doing any of the work in person. “But we observed all the rules during filming. We all wore masks, stayed six feet apart, had all sanitation checked every day as well as having our temperature taken. Actually, it was awesome. And it worked.”

Dennis adds that the show is totally non-partisan. “Because regardless of where we stand politically, our goal is simply to make a commentary on politics, so we force ourselves to take jabs at one side and then the other. And talking to people who may be on the other side of the fence, we managed to get a better sense for how both sides feel.”

Raised in Huntingdon Valley, Dennis now lives in Newtown, Bucks County. Growing up, he first thought he might like to become a politician, but then settled on becoming a teacher. “And I do that now, teaching world religion by day at Villa Joseph Marie High School in Holland (Bucks County, not the country). Also, I've been teaching improvisation to students ages 8 to 82.” He and his wife, Danielle, own and operate Unscripted Productions, an improv school and studio in Newtown.

Meeting Braithwaite for the first time when he was attending St. Joe's Prep School, Dennis remembers that is was Tony who inspired his love of theater. “Tony was my director in theater at the school, and he deepened my love of theater. He ignited my passion. To this day I realize my theater background has trained me to do many things, teaching me so many valuable things I can use in my everyday life. It made me a better teacher, a better father and a better husband. And it would have made me a better politician, too; I'm sure.”

A graduate of the University of Scranton, Dennis has held various jobs over the years, eventually ending up working in the education department at Philadelphia Theater Company. He met his wife there, and the couple opened Unscripted three years ago, which Dennis had dreamed of doing for many years.

“I'm incredibly fortunate in that I have so many things to keep me busy,” Dennis said.