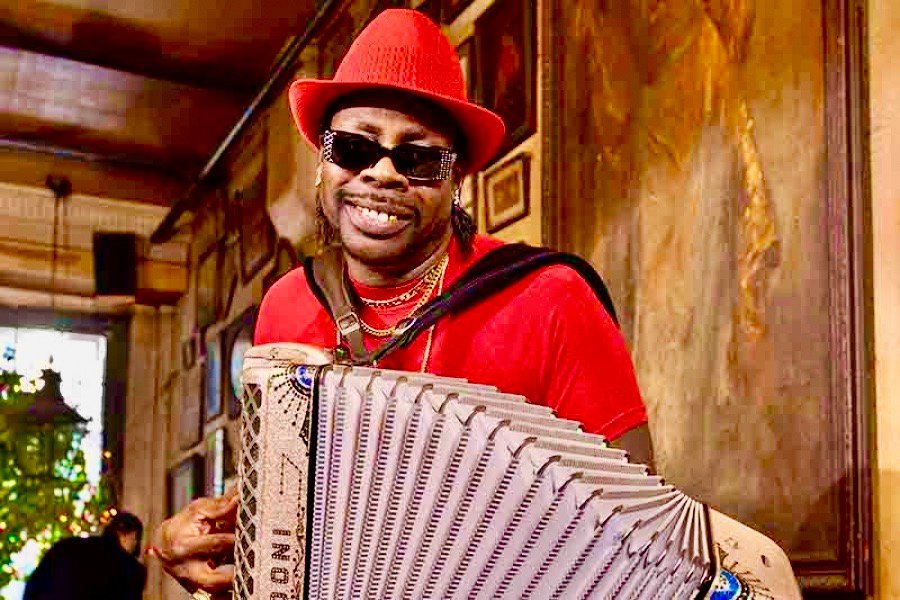 Chenier,  whose Grammy-winning father, Clifton Chenier, was known as the “King of Zydeco,” has performed alongside many internationally-recognized artists, including  Paul Simon, Joe Sample and Ray Parker, Jr. Raised in Texas and Louisiana in an indigenous American culture with its distinctive language, cuisine and music, Chenier and the Red Hot Louisiana Band deliver soulful vocals along with masterful accordion-driven Zydeco and Blues. Philadelphia has been a frequent stop on their tour.

“I've pretty much been traveling to Philly my whole career,” Chenier told us, “starting around 1988. I have been playing for the Philly Zydeco group for a long time, so after the pandemic subsided and I was headed east, it was a no brainer to do this gig in Mt. Airy.”

C.J. has appeared on the Daily Show and CNN,  and was featured on VH1 and “Entertainment Weekly.” He has exhibited his musicianship at many large festivals and venues such as the New Orleans Jazz & Heritage Festival, Chicago Blues Festival and Austin’s South by Southwest Music Conference. He has received major honors including the Living Blues Critics’ Poll Award and the Best of the Beat Zydeco Album Award from “OffBeat Magazine”

​Upon first listening to his father's music, Chenier thought all the songs sounded the same. But he eventually began to appreciate and master the Zydeco style, later joining his father's band and eventually taking it over. As a teenager in the early 1970s, he played in Top-40 bands in Port Arthur, Texas (home of Janis Joplin), and in the mid-1970s went to Texas Southern University to study music.

“It's not that I wasn’t fond of my dad’s music,” Chenier told us last week. “It was more that I didn’t really know it. Jazz and funk are a couple styles that I was pretty used to hearing all the time, like Miles Davis and John Coltrane. The thing that really changed my mind about Zydeco music was the audience. They had so much fun until I had just as much fun as they did.”

In 1987, the year his father died, Chenier picked up the mantle of continuing the Zydeco tradition. Paul Simon first heard Chenier in 1990 and featured him on the album, “The Rhythm of the Saints,” and on that year's “Born At The Right Time” tour. In 1992, Chenier played accordion on "Cajun Song," a track on the Gin Blossoms' album, “New Miserable Experience.” Chenier and the Red Hot Louisiana Band also performed on the popular public television program, “Austin City, Limits.”

In October, 1994, Chenier was signed by Alligator Records. His debut release there was “Too Much Fun,” which was named “Best Zydeco Album of 1995” by Living Blues magazine.

“Well, as for the future,” Chenier said, “I’m working on a CD which I have been working on for the last 11 years. I am seriously working on one right now because it’s time to release one. I hope to be performing everywhere for everybody for a long time.”

Allons Danser, sponsor of the Zydeco Dance Party, is a local 20-year-old nonprofit organization dedicated to bringing the best of Louisiana Cajun and Zydeco musicians to the Delaware Valley.

Beginner dance lessons will start Friday at 7:30 p.m. Live music follows at 8:30 p.m.  New dancers are welcome, and no partners are necessary. This is a vaccinated and masked event. The Irish Center is at 6815 Emlen St.

For more information, visit allonsdanser.org. Len Lear can be reached at lenlear@chestnuthilllocal.com