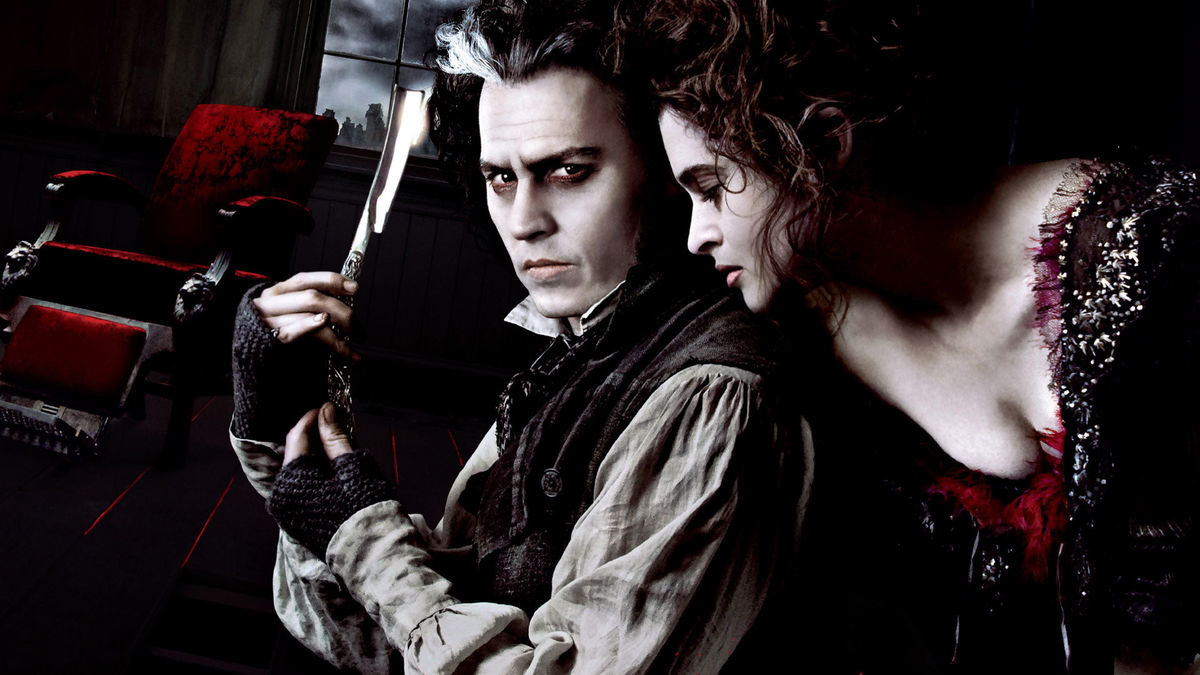 That's not a complaint, but a literal description of “Sweeney Todd: The Demon Barber of Fleet Street” (2007), director Tim Burton's movie version of Stephen Sondheim's unusual Broadway hit.   This unique combo of musical and violent thriller about a throat-slashing barber is, aptly enough, a cut above.

The centuries-old urban myth that was Fleet Street's demon barber makes for a cynical, macabre tale of tonsorial revenge in 18th-century London.

Sweeney, played by Best Actor Oscar nominee Johnny Depp, is a barber, originally named Benjamin Barker, who was sent away to do time in an Australian penal colony after being falsely accused and convicted by a venal, sexually predatory judge played by Alan Rickman.  When Barker returns to Victorian London fifteen years later, he learns that the judge raped his wife, who subsequently poisoned herself, and has taken his daughter as his ward.

Changing his name to Sweeney Todd, Barker plots his revenge by teaming up with Mrs. Lovett, a widowed baker played by Helena Bonham Carter, who owns the pie shop beneath his barber shop.  She longs to be more than just Sweeney's business associate, but it'll do for now, when all he can think of in his half-dead state is the vengeance he seeks.

Thus he comes up with a half-baked, two-birds-with-one-stone method of disposing of dead bodies while providing fresh meat for Mrs. Lovett's thus-far-subpar meat pies.  Before you can say "shave and a haircut," the crazed, formerly mild-mannered, currently-barbarous barber has turned from a wronged victim into a full-fledged serial killer.

“Sweeney Todd” is a blackly satirical operetta, with ever-interlocking musical segments and nearly all the action unfolding in song.

Burton creates a dark, squalid London that's a desaturated dip in the polluted pool of the Industrial Revolution.  Of course, that makes the metaphoric blood look that much more glaringly, synthetically, and even comically red.  The film, so monochromatic that it occasionally appears black-and-white, won the Oscar for Art Direction and was also nominated for Costume Design.

Burton lets his cast do their own singing, and the ensemble members acquit themselves well, delivering Sondheim's witty, cynical, intricate lyrics with not only skill but what seems a gratefulness for the privilege.

Depp is wonderful as an Edward Razorhands, singing a song to his gleaming straight razors and wielding them with the skill and grace of an orchestra conductor.  His intense, tormented, and permanently distracted Sweeney is the polar opposite of his flamboyant Jack Sparrow in the popular “Pirates of the Caribbean” trilogy.

Is what he does singing or acting?  Doesn't matter, it turns out, because it's both in a performance that's as ferocious as it is sublime.

And Burton surreally stylizes the neck-slitting violence by having the blood spurt so effusively that the victims on display come to resemble volcanoes overflowing with raspberry-jelly lava.  This marvelous musical is somehow horrifying and campily amusing at the same time, neither exploitative nor sanitized.

Any way you slice it, “Sweeney Todd” is, like Mrs. Lovett's meat pies, to die for.