Robin Wright and Tom Hanks in Forrest Gump, which is celebrating its 25th anniversary in 2019. by Bill Wine Each week, veteran film critic Bill Wine will look back at an important film that is worth … 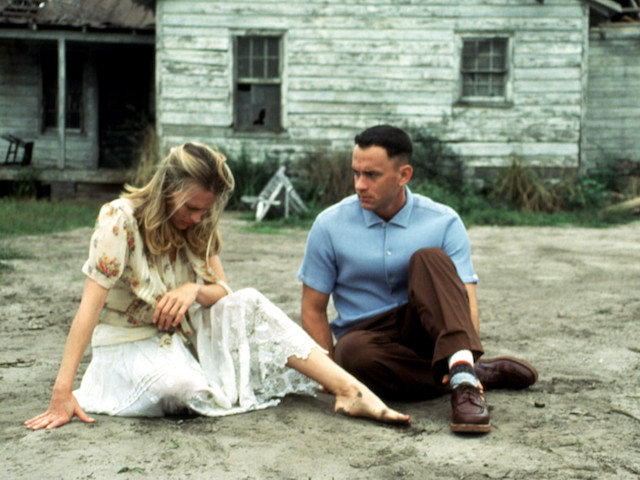 Robin Wright and Tom Hanks in Forrest Gump, which is celebrating its 25th anniversary in 2019.

I’ve got three movie recommendations for you: One is a sparkling comedy, another is a moving drama and the third is a unique special-effects adventure.

And they’re all “Forrest Gump.”

But like most great films, it’s difficult to categorize. So let’s call it a romantic comedy-drama docu-fable.

Whatever the heck that is.

It’s the fanciful story of one American with a small brain and a big heart who encounters several 20th-century icons and manages, while his country loses its innocence, to hold onto his.

Tom Hanks plays a man-boy with an IQ of 75, Robin Wright is the woman he loves with unqualified devotion, Sally Field is his wisdom-spouting and whatever-it-takes resourceful mother and Best Supporting Actor Oscar nominee Gary Sinise is his best buddy.

That’s about all you need to know going in, except that this humble, unassuming, straight-talking man will become part of just about every major American historical event over the three decades that the film depicts as Gump’s unassuming innocence contrasts with the chaotic conflicts happening all around them.

Few movies have added as many lines of dialogue to our collective pop-culture consciousness:

“Stupid is as stupid does.”

“Life is like a box of chocolates: you never know what you’re gonna get.”

Despite its obvious critical and commercial success, the film had its share of detractors, a phenomenon that might be attributed to the fact that most layered, impactful movies, like a Rorschach test, can be interpreted in many different ways.

The ever-reliable Hanks, coming off his Academy Award-winning role in “Philadelphia,” turned in another gem as the supposed chump named Gump, playing the steadfast Forrest living an obliquely charmed life with irresistibly sweet, goofy optimism.

As for director Zemeckis, he proved once again that he was a master at combining high-tech effects and solid storytelling, as he had already done in the “Back to the Future” trilogy, “Who Framed Roger Rabbit” and “Death Becomes Her,” and would later do in “Contact,” “Cast Away,” “The Polar Express,” and “Flight.”

“Forrest Gump” takes a back seat to none of them.

The sequences in which Gump appears with actual historical and cultural figures of the '50s, '60s and '70s – including Elvis Presley, John F. Kennedy, Richard Nixon, Lyndon Johnson and John Lennon – remain, even in the CGI era, ingenious and hilarious.

A magical 20th-century parable, “Forrest Gump” is a dizzyingly original existential dramedy about destiny that’s as light as a feather, as strong as an ox, as colorful as fireworks and as spellbinding as hypnosis.