Steve Coogan and John C. Reilly as Stan Laurel and Oliver Hardy in the biopic ‘Stan & Ollie.’[/caption] by Bill Wine Each week, veteran film critic Bill Wine will look back at an important … 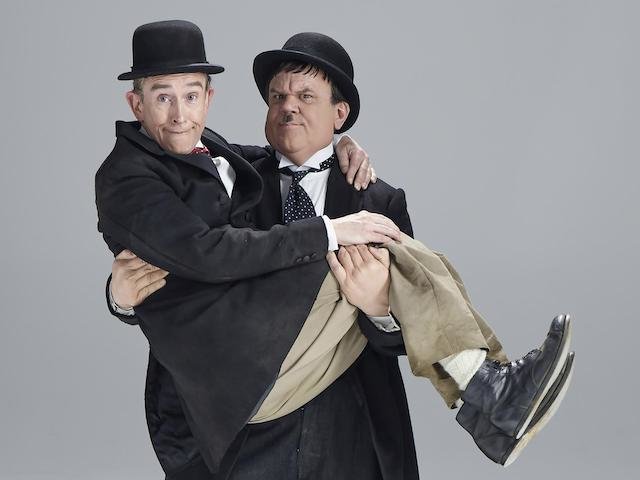 On marquees and contracts, they were Laurel and Hardy.

But for those of us who loved them dearly, they were – and still are – on a first-name basis.

Thus the diverting and endearing biopic, "Stan & Ollie," a puckish portrait of friendship and love between arguably the greatest and most beloved screen comedy duo in movie history, gifted providers of much-needed belly laughs during the Great Depression.

Brit Stan Laurel and American Oliver Hardy, the former curious and slim and childlike, the latter pompous and rotund and frustrated, left individual movie careers and teamed to star together in over a hundred movies, first silents, then talkies, some shorts and others feature-length. Director Jon S. Baird ("Filth," "Cass"), working from a screenplay by Jeff Pope, focuses on a stretch when their livelihood was in peril and they were confronted with considerable money worries and major issues.

It was then that they embarked on an ill-fated, grueling theater tour of the post-war United Kingdom in 1953, years after “The Boys,” as they were sometimes referred to, were a dominant pop culture force and urgent big-screen attraction, specializing in, among other things, their particularly idiosyncratic brand of sly slapstick, carefully choreographed and oddly elegant in such memorable outings as "The Music Box," "Babes in Toyland," "Way Out West," "Another Fine Mess," "Blockheads," "Busybodies" and "Helpmates," designed to make all generations laugh. Hard.

If nothing else, who could forget them carrying a piano up a set of steep steps in "The Music Box" or their dainty dance in "Way Out West"? Nobody, that's who.

The casting choices for impersonators of the titular leads seem odd and arbitrary at first blush. But John C. Reilly's Ollie and Steve Coogan's Stan turn out to be the film's most irresistible revelations, always pleasantly watchable and occasionally astounding.

Reilly, the Oscar-nominated supporting actor from "Chicago," wearing fat-suit prosthetics and heavy makeup, captures Hardy's speech patterns and fourth-wall-breaking gestures so perfectly, we have to keep reminding ourselves that it's someone else under there.

And Coogan, who was Oscar-nominated for co-writing "Philomena" along with Jeff Pope and also for co-producing the Best Picture nominee, contributes what seems like a nifty tribute to Laurel as a unique performer as well as a gifted writer and director.

They're adroitly supported by Shirley Henderson and Nina Arianda as their wives – Stan's fourth and Ollie's third – bouncing off each other so cleverly, they seem to argue for their own movie or perhaps remind us of the abiding dearth of female double acts.

But the two male leads have done nothing less than replicate the artful antics and merry magic of the terrific twosome, essentially children in men's bodies, and convey their enduring appeal: we're still smitten because, well, who wouldn't be?

S&O relied on the simplicity of terse dialogue and inevitable looks of exasperation delivered right to the camera, never too often, never too seldom, as part of our bond with The Boys and our repeated acknowledgment of life's primal absurdities, calamities, and indignities.

And, two-thirds of a century later, their bountiful humor holds up in a sprightly mix of broad comedy and touching sentiment. So say hello, again, to "Stan & Ollie."