Frances McDormand and Peter Dinklage in “Three Billboards Outside Ebbing, Missouri.”[/caption] by Bill Wine You’d have to sit through a lengthy parade of movies to come upon a trio of … 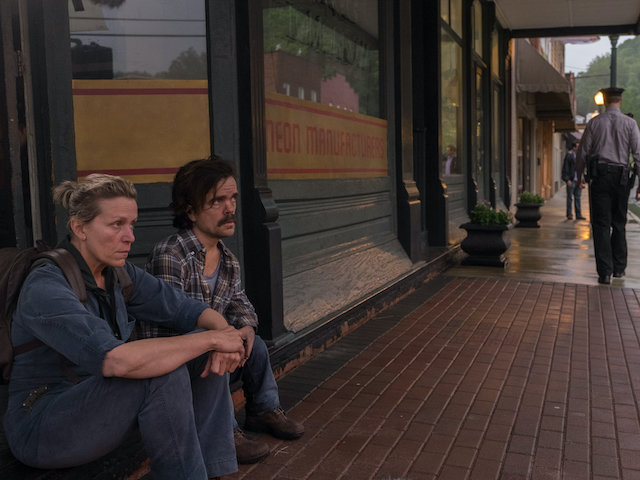 You’d have to sit through a lengthy parade of movies to come upon a trio of performances in the same film as authentic, as lived in and as memorable as those of Frances McDormand, Woody Harrelson, and Sam Rockwell in “Three Billboards Outside Ebbing, Missouri.”

How’s that for an unlike-any-other title?

This darker-than-dark 2017 comic drama from British writer-director Martin McDonagh (“In Bruges,” “Seven Psychopaths”) is about as unpredictable as a contemporary movie can be.

The premise: a grieving mother (McDormand) takes on the local authorities (sincere police chief Harrelson and racist deputy Rockwell) and challenges them to solve the case triggered by the rape and murder of her daughter.

She does so by posting attention-getting messages on the items and in the location referred to in the title.

McDormand’s so-vivid-she-jumps-off-the-page character, which can’t help but put us in mind of her iconic, Oscar-winning work as Marge Gunderson in “Fargo” (1996), is a recently divorced mother who lost her daughter less than a year ago.

But the case to catch her killer has gone cold and updates have ceased, which is why she has rented the space on three barren billboards.

McDonagh’s fine, unsentimental script traces what happens throughout Ebbing’s populace as one thing leads to another in the wake of this unspeakable tragedy, but the narrative remains refreshingly unconventional in its compellingly and convincingly rendered reality.

McDormand’s role, written for her by McDonagh, anchors the ensemble, creating a ferocious protagonist who is in severe emotional pain. But, understandably sympathetic and justifiably enraged, she is also occasionally – and amazingly – laugh-out-loud funny.

Meanwhile, the script obliquely explores injustice and violence and the infuriating indifference of the universe, while forcing us to re-examine our definitions of hero and villain.

The stimulating amalgam of wrenching tragedy and acidic wit is something we don’t often see on the big screen, bur here it’s delivered in spades.

And to no one’s surprise, Oscar came a-calling. McDormand went home with the Best Actress Oscar, and Rockwell came away with the Best Supporting Actor prize.

Still, it’s the trio of generously delineated major characters and their fascinating, intersecting character arcs, brought to three-dimensional life by performers at the top of their game, that stay with us long after the end credits have rolled.

The unique and compelling “Three Billboards Outside Ebbing, Missouri” is a bracing, commanding, indelible dramedy.