Musicopia has now served about 360,000 students, including some in northwest Philadelphia. 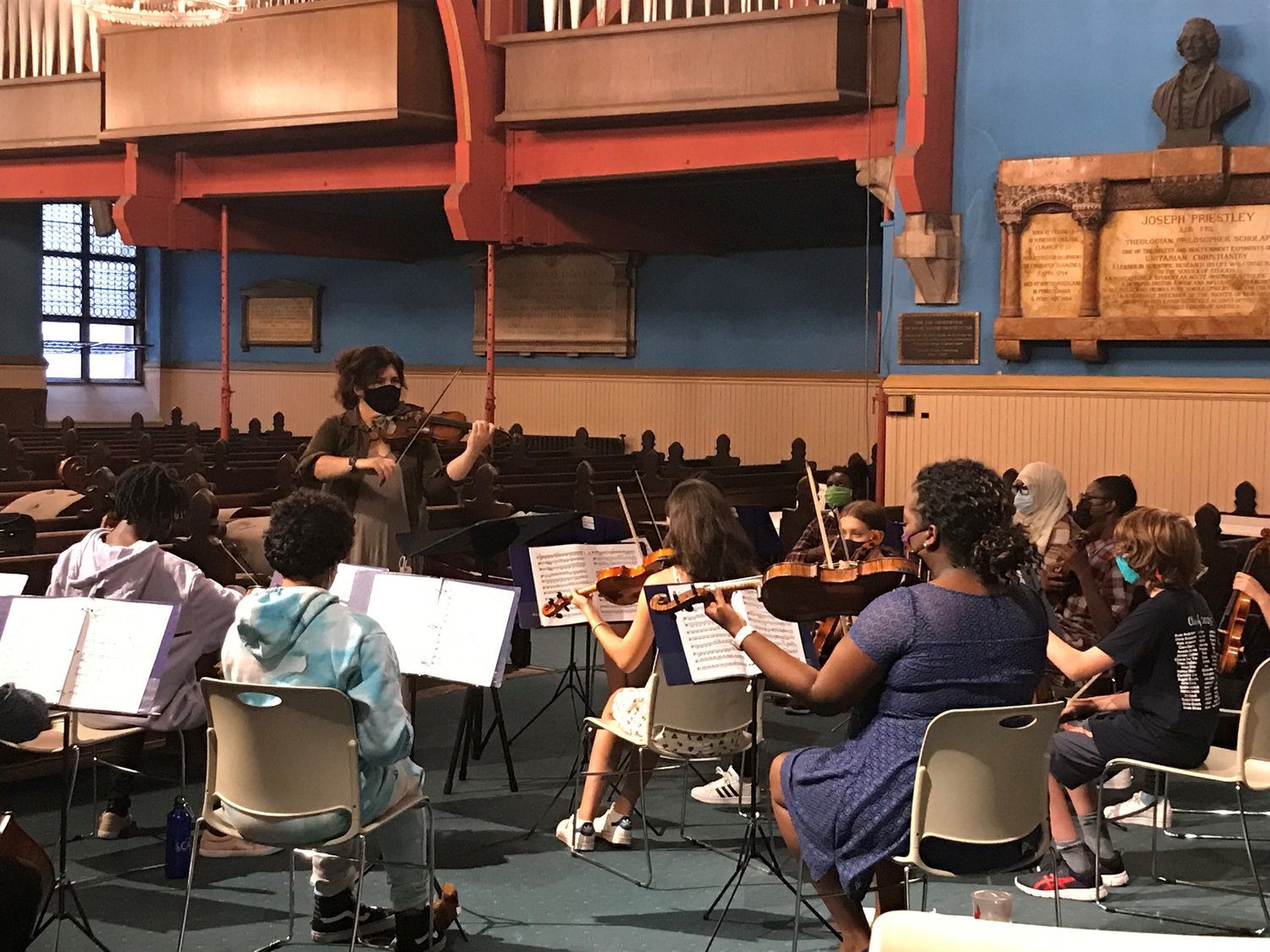 Bowmaker Elizabeth Vander Veer Shaak is the owner of Mt. Airy Violins and Bows, 6665 Germantown Ave. in Mt. Airy, a drop-off point for donations by area residents of used instruments that will be given to underserved music students.
Posted Wednesday, December 1, 2021 6:00 am
by Constance Garcia-Barrio

On an icy morning last winter, Germantown resident Taia Harlos, a pianist, violinist and violist, packed tools in her car and criss-crossed Greater Philadelphia to repair instruments of students in Musicopia, a local nonprofit that brings music into the lives of children.

“With COVID-19 and months of virtual rehearsals, I’d had no chance to check students’ instruments,” said Harlos, who manages three Musicopia orchestras. “That day, I stepped over snow banks and worked on students’ front porches, replacing strings and straightening bridges,” she said. “Parents and grandparents would stand there while I worked and sometimes ask a question. It was exhilarating and exhausting.”

In many cases, Harlos visited homes of students of color. “Musicopia’s mission has always been to reach untapped communities with music,” said Harlos, “and that may mean Black and Brown kids. I felt at home because my mom was a teacher who invited kids of all colors into our home.”

Begun in 1974, Musicopia aims to “..reach underserved students often cut off from the region’s rich culture,” says executive director and pianist Catherine Charlton of Chester County. “We want to give all children, regardless of circumstances, the opportunity to have their lives transformed through music.”

Musicopia’s award-winning drumlines, which include students ages 9 to 18 at eight public schools, can be seen in parades and competitions across the city.

For children from low-income households, music can actually heal some of the trauma that can sometimes accompany poverty.

“Integrating music [into the curriculum] offers a strength-based approach to supporting children facing racism and related forms of adversity,” she said.

“Maybe a school doesn’t have a full-time music teacher,” she added, “or maybe the teacher comes in just once a week. Many schools are stretched to the limit. We strive to help students in those situations. You can see their self-confidence grow as they master a composition.”

Because some students struggle to get enough practice time due to the lack of their own violin, trumpet, or other instrument, Musicopia began an Instrument Donation Program.

“It can cost upwards of $60 monthly to rent an instrument and far more to buy one, even at the student level,” said Macedo. “Many households can’t afford it.”

Musicopia partners with sites throughout the city where donors can leave gently used instruments to give to students.

“Serving as a drop-off point reflects our values of supporting the community and making music available to anyone who wants to play,” said bowmaker Elizabeth Vander Veer Shaak, owner of Mt. Airy Violins and Bows on Germantown Avenue near Springer Street. Donors bring in instruments from Chestnut Hill and other northwest neighborhoods, she said.

In the future, Musicopia plans to take a close look at itself.

“We formed a DEI committee last year,” says Harlos. “Our mission has always been to bring music to children who otherwise wouldn’t have it in their lives, but implicit bias can creep in.”

Musicopia also wants to serve more students and deepen its ties with communities, as Harlos did on that bone-chilling day. “I glimpsed the complexity of students’ lives and I felt closer to them,” she said.

For more information about Musicopia, headquartered in Center City, see   facebook.com/musicopia/ or call (215) 829-9522.

Constance Garcia-Barrio is a long-time Mt. Airy resident and retired professor of Romance languages at West Chester University who has just finished writing a novel based on Black history in Philadelphia.