Nicolas Troyano is on a mission to remove the invasive ivy that is strangling so many huge trees in Chestnut Hill. 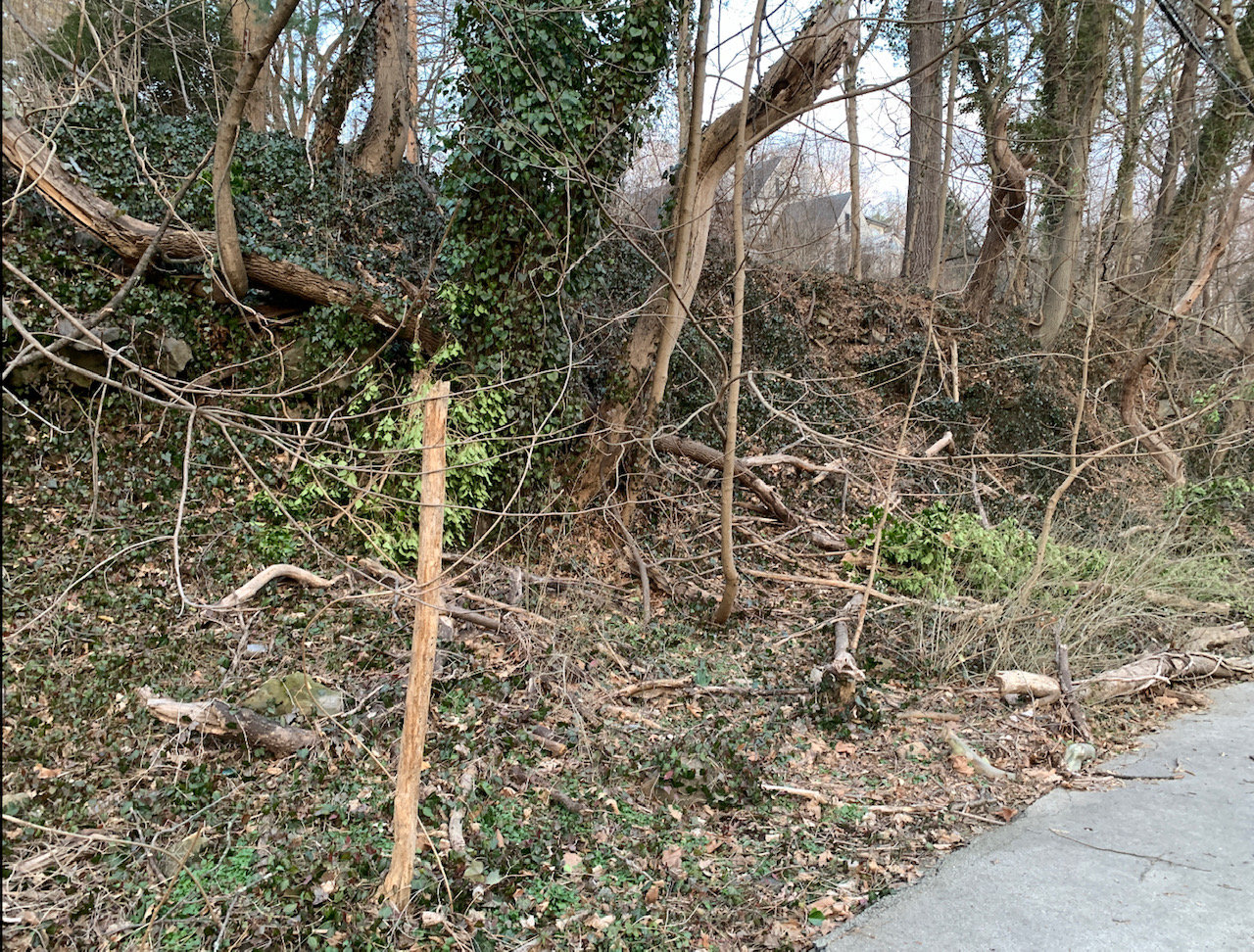 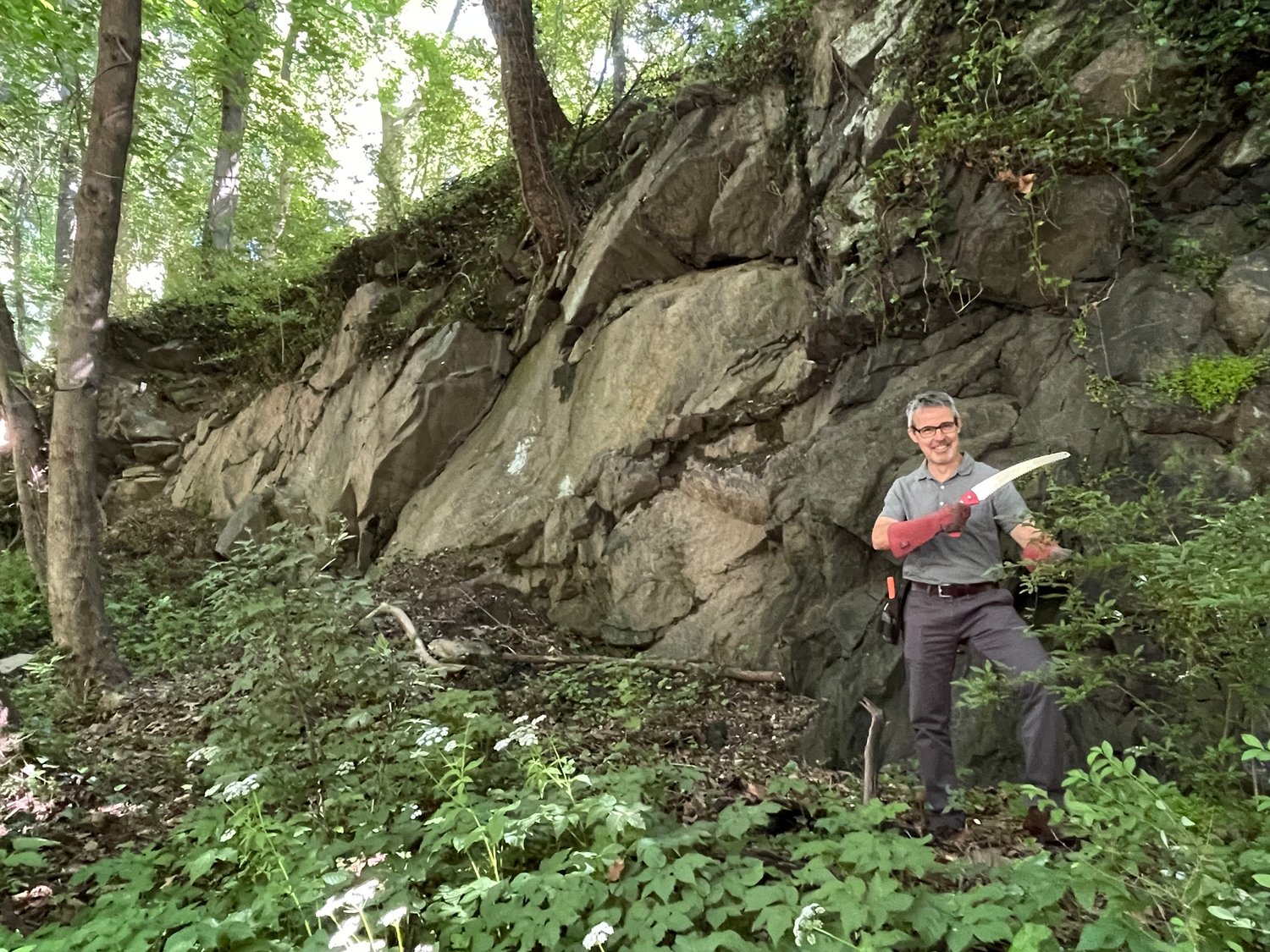 After Troyano cleared away all of the English ivy, you can now see Wissahickon schist.
Previous Next
Posted Thursday, June 9, 2022 12:00 am
by Len Lear

Nicolas Troyano is on a mission to remove the invasive ivy that is strangling so many huge trees in Chestnut Hill. He even has a slogan for his campaign, which always seems to elicit a smile.

“I call it 'If you give a schist about Chestnut Hill, please eliminate invasive English ivy!'” Troyano said.

The Chestnut Hill resident has been on a one-man crusade since last fall, taking it upon himself to cut English ivy away from the massive trees near the entrance to Cresheim Valley Drive, just off the intersection with Lincoln Drive.

Troyano's late father came to the U.S. in 1936 to get away from the Spanish Civil War, where he was on the Republican, anti-Fascist side. He escaped on a Russian ship and became a deep sea navigator and pilot. Troyano, who grew up in Brooklyn and Long Island, came to Philadelphia in 2005 for a three-year internship in psychology at the University of Pennsylvania, and decided to settle here after earning his doctorate degree at the University of Wisconsin-Madison. At first, he lived in West Philadelphia, but moved to Chestnut Hill in 2010 when he said his Penn-area neighborhood became too dangerous.

“I fell in love with the Wissahickon,” Troyano said. “I never saw a park like this in a city anywhere, and I have traveled the world. I never saw trees this size outside of California.”

After graduate school, Troyano worked in the pharmaceutical industry. He trained and monitored researchers working on clinical trials in psychiatry and neurology.

“But the universe told me to take a mid-career break,” he said, “so I took off in November of 2020. I will probably take another six months off.”

Troyano said he was inspired by his friend and neighbor Garth Pegram, a native of Wales, who single-handedly killed off the unsightly English ivy that was choking the magnificent trees on the piece of land between Lehmann’s Garage, next to the Mermaid Inn, and the nearby Chestnut Hill Flower & Garden Center on Germantown Avenue.

“So now, instead of looking like a creepy, abandoned lot, this piece of land looks like a lovely park, which is much more fitting, since it is at one of the main entrances to Chestnut Hill,” Troyano said. “Garth inspired me to not only decry how ivy was choking and killing so many of our regal trees but to actually do something about it.”

Troyano started last fall on the south side of Lincoln Drive near its intersection with Cresheim Valley Drive. He cut away the ivy from 10 trees in 10 days, using a landscape saw and hand clippers to snip a small notch on each ivy stem. He also cut away the ground ivy that was escaping into Cresheim Creek. “The trees look so much happier now,” Troyano said.

This spring was phase two, in which Troyano cleared the ivy from the cliffs, so that the beautiful Wissahickon schist, which had been completely covered, is now clearly visible.

“I can't do work this summer because I am allergic to poison ivy. I got it all over my face. I will do phase three of the work in the winter,” he said.

He started by first removing years worth of fallen branches and logs from the ground below the cliffs, he said, as well as copious amounts of trash and illegally-dumped construction material, including asphalt and concrete.

“Then I had to do some climbing to clear as much of the ivy that was hiding the beautiful stone as I could,” he said. “I’m happy to know that this transformation makes this location more pleasing for everyone who drives or walks by.”

Troyano said he thinks that George and Gertrude Woodward, the original developers of much of Chestnut Hill, would be pleased by his efforts - and urges everyone to look at their own properties and notice whether English ivy is strangling their trees.

“It was great to do physical labor after being chained to a desk for 15 years, especially when it benefits the community,” he said, “even though some people think I'm crazy.”

If you decide to tackle some English ivy, Troyano said, the best thing to do is use sod cutters and a saw or clipper to cut a ½ notch in all the ivy stems to kill them.

“Please do not pull the ivy off the tree since that could damage the bark,” he cautioned. “I hope this article will stimulate a serious effort among residents of Chestnut Hill and Mt. Airy to remove ivy wherever it is growing. I really am hoping people in this area will indeed 'give a schist.'”

A renovation checklist: Will upgrades be worth it?

Renovation versus restoration: One professional's guide