Shop Local: 'Hideaway' is a gateway to the past

Hideaway owner Brian Reisman (Photo by Jeremy Jones) by Jeremy Jones In covering Hideaway Music for this week’s column, my intention was to use the resurgence of vinyl records as what we …

Shop Local: 'Hideaway' is a gateway to the past 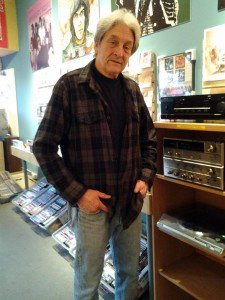 In covering Hideaway Music for this week’s column, my intention was to use the resurgence of vinyl records as what we journalists call the “hook;” that tenderly crafted literary technique used to peak curiosity and reel in the reader. But once within the walls of 8612 Germantown Avenue, the hook morphed into an unexpected visit from my brother who died seven years ago.

As I entered Hideaway, classic strains of Bossa Nova filled the room with the lyrical fusion of Astrud Gilberto and Stan Getz. Hideaway owner Brian Reisman was on the phone. A rare copy of the UK-issued version of the “Electric Lady Land” album sits on the shelf behind him. “Yes,” he responded to the caller. “Our emphasis is on classic rock, jazz, blues, rock ‘n’ roll, folk rock, but no classical.”  While he continued to complete a customer’s order for the latest Hozier CD, another call came in:

While waiting for Reisman, I scanned Hideaway’s display of posters – a citadel of rock music’s super stars and history-making concerts: Hendrix, The Doors, Neil Young, the Rolling Stones and a quintessential Dylan poster from 1964: “The Times They Are a-Changing.” I wasn’t expecting Dylan – or my brother – to enter the story, so I continued to observe. Like a boat determined to stay her course, I couldn’t list toward memories of my brother and his inextricable connection to Bob Dylan.

I spoke to a customer who was purchasing a gift certificate and noticed there wasn’t a prototype of clientèle. Ranging in age from 20 years to 70 years, everyone was immersed, almost hypnotized, by what they were doing; whether they were wearing headphones to test the listening quality of a record, flipping CD cases or reading album notes.

“Having this music store is essential,” a woman from Wyndmoor told me.

“It’s relaxing here,” said a man from Mt. Airy about a place whose website unabashedly says: “Hideway Music has sunk to new depths to bring you rare, obscure, bizarre unpolished gems from the past.” Call it relaxing or essential, it's a place where customers are happy to wallow in the depths.

“I made it this way,” said Reisman, a semi-retired writer who, with the enviable mix of vision and passion, opened a much needed music store in Chestnut Hill 12 years ago (originally located across the street). A big Beatles and Grateful Dead fan, Reisman also acknowledged that he “understands people are taken by the ambiance, but it’s not a museum tour. This is a place for getting together and listening to music; like the way we would hang out when I was a teenager. It was a social thing then.”

If you build it, they will come. Whether it’s Boomer nostalgia, the collectability factor or the oft suggested yearn for the tangible – the feel, the literal action of a needle making sound from a co-polymer of vinyl chloride acetate – Hideaway is in the groove. United States' sales of vinyl records have tripled in the last six years. In the first part of 2014, Billboard counted 6.5 million units sold. Vinyl is back and the presses can’t keep up. But there’s little doubt Hideaway will.

I'm guessing Reisman and I are about the same age. It’s not likely I would have known him in high school. I was watching the “Sound of Music” while he and his friends were living the sound of music in all its beautiful, defiant, era-changing glory. He was cool. I was not. But just before I left, we struck a kindred chord – music does that.

I saw a boxed CD set of “Bob Dylan and the Band’s Basement Tapes.” Yielding to the tide’s pull of love and remembrance, I finally dropped anchor and asked Reisman if he was familiar with Dylan’s “Ballad of a Thin Man,” the final track on side one of “Highway 61.”

“Sure,” Reisman said, as the first line of the song came to him: “You walk into the room with your pencil in your hand …”

“That was my brother,” I said with a hint of whisper. “’Mr. Jones’ [in the song] was my brother. He was a stringer for Time magazine when he interviewed Dylan at the Newport Folk Festival in 1965. Obits about him usually tell the story.”

“I’d like to talk more about that,” Reisman said with a smile.

In many ways, Hideaway Music is a time line and a lifeline of what we love – what centers us for whatever reason. Whether legendary or cutting edge, music is a constant, even when the times they are a-changin'.