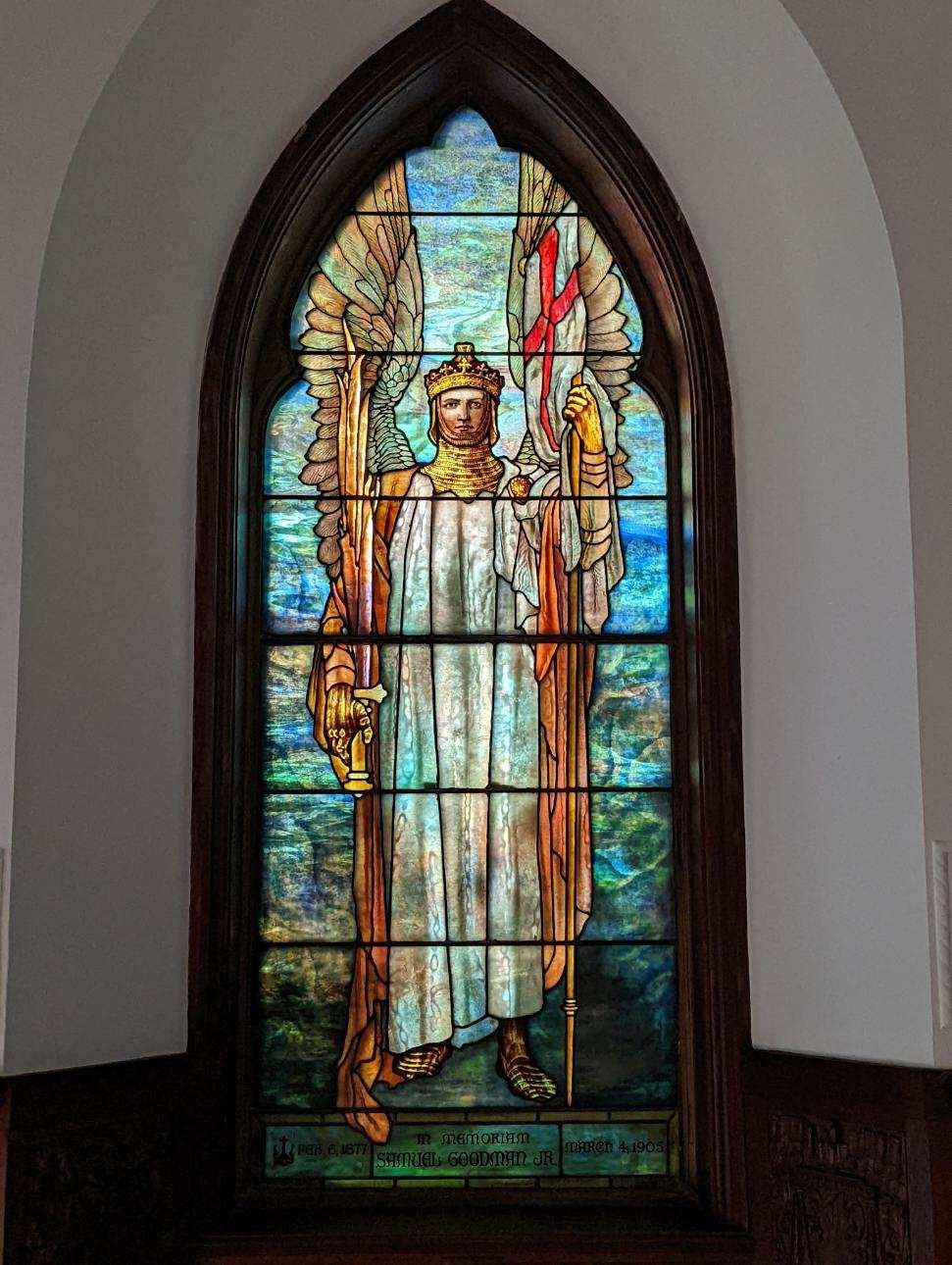 A Choral Evensong at St. Paul’s Episcopal Church marked the Feast of St. Michael the Archangel and All Angels, whose image is depicted in a stained glass window made for the church in the Tiffany Studio.
Posted Thursday, October 6, 2022 12:00 am
by Michael Caruso

St. Paul’s Episcopal Church in Chestnut Hill, presented its first Choral Evensong of the season on Sept. 25. The liturgy celebrated the Feast of St. Michael the Archangel and All Angels, transferred from Sept. 29, the official date in the calendar.

Parish music director Andrew Kotylo chose a program of music that was both magisterial, in keeping with St. Michael’s role in both the Old and New Testaments as commander of the heavenly hosts, and angelic in his role as defender of individual Christians.

With Michael Smith (of St. Thomas, Whitemarsh Episcopal Church) providing support at the organ, Kotylo led his choristers in Herbert Howells’ “Magnificat” and “Nunc Dimittis” from his “Collegium Regale.” The anthem at the offertory was Edward Bairstow’s “Let All Mortal Flesh Keep Silent.”

Both Howells’ “Magnificat” and “Nunc Dimittis” employ the organ as accompaniment, proffering a full body of orchestral color in support of a broad palette of choral textures.

In accordance with the narrative of its text, the “Magnificat” begins softly but almost immediately ascends into a step-by-step crescendo of forces and dynamics. The music strides forward to project the Blessed Virgin Mary’s exuberances at the Archangel Gabriel’s having informed her that she will bear the long-awaited Messiah and St. Elizabeth’s recognition of her as the mother of the savior of the world. All sections of the choir – from the sopranos at the top to the basses at the bottom – are engaged in the spacious panoply of the music’s counterpoint.

Kotylo conducted a superb rendition of this splendid score. The singing encompassed a wide range of dynamics, from the softest pianissima to the loudest fortissimos, delineating both the gentle intimacy of a sublime faith and the unfettered joy of belief in the unbelievable.

Howells struck a more subdued tone in the “Nunc Dimittis,” capturing and projecting St. Simeon’s gratitude at having been given the chance to see the infant Jesus before his own passing. Each phrase of the score flows into the next without pause, so that the narrative of its text is offered in an unbroken legato of lyricism.

Once again, Kotylo, Smith and the Adult Choir of St. Paul’s Church gave this glowing work a consummately compelling reading, rounding off each phrase with delicacy and warmth.

Bairstow’s “Let All Flesh Keep Silence” is a marvel of combining the new with the old. Its unison soft beginning harks back to the Gregorian chant that formed the foundation of European sacred music from the early 7th century, when Pope Gregory the Great codified the music to be sung in all the liturgies of the Latin Church in the West.

It was a seminal moment, both musically and culturally in the broader sense. It marked the break between the Latin West and the Greek East, not just in the Christian Church but in the entirety of what had been the unity of the Mediterranean world of the now-splintered Roman Empire. It was a break that has never been healed.

With medieval “plainsong” at its heart, Bairstow’s score builds one layer at a time into the chromatic tonal language of the late 19th and early 20th centuries. Traditional techniques of development, such as canonic imitation and lyrical counterpoint, produce an expansive texture of choral intricacy.

Once again, Kotylo led his forces with exactitude and expressivity. The singing glowed with clarity and coursed with emotion.

Kotylo bookended the service with exemplary work at the organ console. He played the opening “Evening Song” by Bairstow with both delicacy and potency then rounded it off with flair in Percy Whitlock’s mock-Elgar “March: Dignity and Impudence.”

The afternoon also celebrated the completion of the restoration of the Parish Hall, which has a special connection with the “saint of the day.” At the back of the hall is a stained-glass window of St. Michael the Archangel made in the Tiffany studio. At some point, it had been damaged and a chip had fallen out. Miraculously, as it were, that chip was found and has now been reinserted in one of the most beautiful Tiffany windows in Greater Philadelphia.

Coming up at St. Paul’s Church are several musical moments of note. The parish’s 2022-23 season of “Five Fridays” fundraising chamber music recitals gets underway Oct. 14 at 7:30 p.m. with a performance by mezzo-soprano Chrystal Williams and pianist Andrew Hauze. The next Choral Evensong is scheduled for Sunday, Oct. 16, at 5 p.m.

Perhaps most interesting of all will be the performance of John Rutter’s “Requiem” Sunday, Nov. 6, at 5 p.m., marking the ancient Solemn Eucharist for All Souls. In recent years, the settings of the “Requiem” by either Gabriel Faure or Maurice Durufle have alternated. Kotylo decided it was time for a change.

You can contact NOTEWORTHY at Michael-caruso@comcast.net. To read more NOTEWORTHY visit www.chestnuthilllocal.org.