Matt Damon in "The Martian." by Bill Wine “The Martian” is, literally and figuratively, out of this world. Matt Damon stars in this splendid science fiction drama as fictional NASA astronaut Mark … 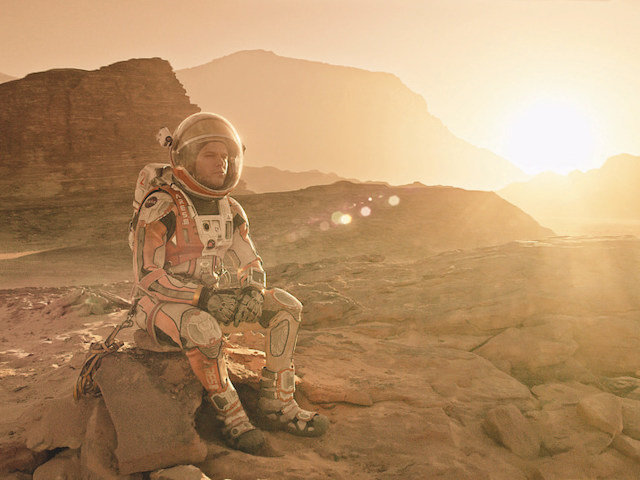 Matt Damon in "The Martian."

“The Martian” is, literally and figuratively, out of this world.

Matt Damon stars in this splendid science fiction drama as fictional NASA astronaut Mark Watney, a botanist and mechanical engineer who finds himself alone on the Red Planet when the crew of the Ares 3 mission, led by Jessica Chastain and including Kate Mara and Michael Pena, evacuate their landing site after concluding – wrongly – that Watney has died during a severe dust storm.

There he is, alone, millions of miles from home, without any way of communicating with Earth, and with only enough food to last him for a few weeks.

Now he must use his skills to somehow produce food and water, to figure out a way of contacting his colleagues and to survive.

Meanwhile, his crewmates have returned home and are unaware of his predicament, although NASA colleagues played by Jeff Daniels, Chiwetel Ejiofor and Sean Bean struggle with whether or when to inform the other astronauts of Watney’s plight.

For three-time Oscar-nominated director Ridley Scott (“Black Hawk Down, “Thelma & Louise,” “Gladiator”), whose glittering resume includes its share of science fiction thrillers (“Alien,” “Blade Runner,” “Prometheus”), this visually commanding space misadventure is about as fine as anything the eclectic craftsman has directed.

And he provides a welcome return of the space program to the movie screen.

In Damon, with his everyman approachability and sly wit – which he lends to the film itself – Scott has got the right leading man, as inner-space grounded as the outer-space movie he’s anchoring and, somehow, remaining relatively relaxed despite his unimaginable desperation during this incredible ordeal of isolation.

Drew Goddard’s script, based on the best-selling book by Andy Weir, which sometimes recalls “Apollo 13” and even more frequently suggests “Cast Away,” manages to include all the necessary exposition without becoming overly technical or overloading the emotional narrative with dry data.

But what the screenplay offers in abundance that gives this particular science fiction adventure distinction is a natural humor that grows out of situation and character. This movie is surprisingly, consistently and effectively funny.

There are suspenseful sequences, to be sure, but precious little action and an extended time frame that spans about two years. What are being celebrated here, in an admirably and appropriately thoughtful way, are intelligence, resourcefulness, expertise and creative problem solving.

Science wonks, listen up: This is, among other things, a celebration of nerds and dorks and geeks, oh my, capable and knowledgeable and resourceful and even heroic in their technical acumen.

And, at least on this occasion, recognized for their accomplishments. Not for nothing was this gem rewarded and celebrated with seven 2015 Oscar nominations: Best Picture, Best Actor (Damon), Best Adapted Screenplay, Best Visual Effects, Best Production Design, Best Sound Mixing, and Best Sound Editing.

So add this one to 2013’s “Gravity” and 2014’s “Interstellar” for a relatively recent three-year trifecta of superbly realized cinematic sci-fi.

Despite the PG-13 rating (for “strong language, injury images, and brief nudity”) and the well-over-2-1/2-hour running time, you could easily make the case for this triumphant adventure as fine multi-generational family entertainment.

An admirable and exhilarating survival drama, “The Martian” is enthralling science fiction that plays like ingeniously informed science fact.