Woodmere to open next season of Chestnut Hill Film Series on Sept. 30

Gary Cooper and Grace Kelly in a scene from “High Noon.”[/caption] by William R. Valerio Mark your calendars now! The Chestnut Hill Film Group is getting ready for another season of rare films …

Woodmere to open next season of Chestnut Hill Film Series on Sept. 30 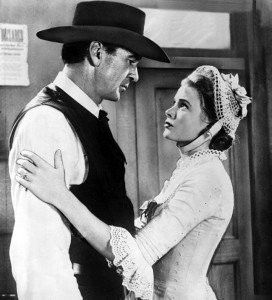 Gary Cooper and Grace Kelly in a scene from “High Noon.”[/caption]

Mark your calendars now! The Chestnut Hill Film Group is getting ready for another season of rare films that merit being shown under Woodmere’s roof. Films start at 7:30, but arrive early to chat with neighbors and visit Woodmere’s galleries.

Ralph Hirshorn, a Chestnut Hill institution unto himself, leads the film group and introduces each program with brief remarks. The suggested donation is $5, and everyone is welcome.

Join us for a glass of wine at 6:30 on Sept. 30 to open the season with the Hollywood masterpiece “High Noon” (1952) on our big screen. This was Grace Kelly’s “coming out” to Hollywood and to her adoring public. “High Noon” will be introduced by Inquirer movie critic Steven Rea, who will reveal “the secrets of High Noon” and the film’s fascinating political resonances in 1950s America.

This dramatic western stars Gary Cooper as a stoic town marshal facing a former enemy who returns to seek vengeance. Set in real time, tension builds as the clock ticks toward “high noon.”

On Oct. 7 we present “Suddenly” (1954), in which the young Frank Sinatra, performing out of character, plays a sinister war veteran. Sinatra, one of three gangsters, traps a family in their own home with the intention of killing the president of the United States on his whistle-stop visit to the town.

“Nobody’s Fool” (1994) on Oct. 14 showcases one of Paul Newman’s best performances as an emotionally immature man coming to terms with life. Enjoy Jessica Tandy in her final film, along with supporting trio of great youngsters: Bruce Willis, Melanie Griffith and Philip Seymour Hoffman.

For comic adventure, travel to the dreamy, sun-baked landscape of Rome and Tuscany on Oct. 21 in “Il Sorpasso” (1962), a poignant Italian road comedy set in the early 1960s.

On Oct. 28 we present the riveting film-noir classic, “Sorry Wrong Number,” (1948) with the genre’s leading lady, Barbara Stanwyck. The plot unfolds after Stanwyck, a possessive, spoiled wife, overhears a telephone conversation in which a murder is plotted…and she is the intended victim!

Yearning for the romance of a bygone era? On Nov. 4, come see the sparkling movie adaptation of Franz Lehar’s operetta, “The Merry Widow” (1934) directed by the legendary Ernst Lubitsch. Jeanette MacDonald and Maurice Chevalier star as the rich widow and the womanizing count.

Original format is important to us. On Nov. 11 see one of the masterpieces of silent film, “The Unholy Three” (1925) projected in 16 mm and with live musical accompaniment as performed by Don Kinnear. Lon Chaney plays a sideshow ventriloquist who masquerades as an old woman to front a crime ring.

On Nov. 18 we present an Alfred Hitchcock’s “Strangers on a Train” (1951), the thrilling tale of two men who meet on a train and, unbeknownst to one of them, enter into an arrangement to “swap” murders. You will never trust the person next to you on Amtrak again! The scenes that take place in New York’s historic (now demolished) Pennsylvania Station are also a thrill.

And finally, although it may seem to be a strange thought now: get into the holiday spirit at Woodmere with the Museum’s own presentations of two seasonal classics: “Shop Around the Corner” (1940) on Dec. 7 and “White Christmas” (1954) on Dec. 16.

More information is available at woodmereartmuseum.org/calendar/Tuesday-nights-at-the-movies.

Allens Lane production questions the meaning of life
A contemporary remake of Anton Chekhov's "Uncle Vanya." Director Robert Bauer's "Life Sucks" creates a show that is engaging on its own terms.

Local author inspired by sister with Down syndrome
It took quite a few years, but Andrea completed the book with help from another daughter, Elizabeth Anne, who grew up and graduated in 2006.
Hill native named All-Conference in Big Ten
Now a sophomore, Burns earned a starting role for the Wolverines as a freshman.

Puccini and Verdi Grace Local Opera Stages
Perhaps the most amazing aspect of AVA’s presentation of “La Boheme” is its incredibly imaginative use of the tiny space of the Warden Theater.