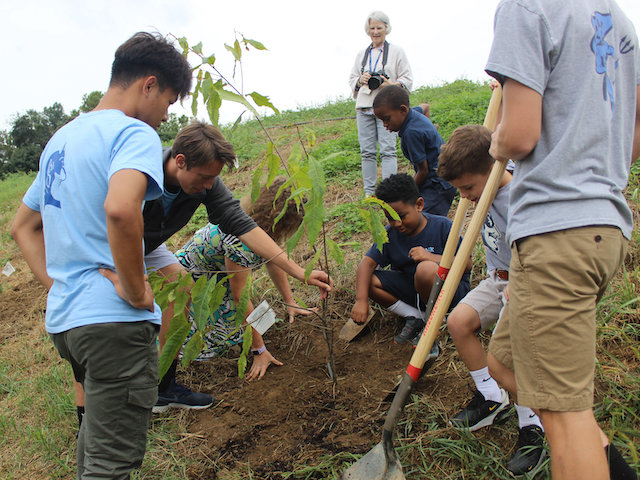 The American chestnut tree, which once covered the northwest area of Philadelphia, and lent its name to the neighborhood, Chestnut Hill, has suffered so much decimation, it is considered “functionally extinct.”

Springside Chestnut Hill Academy has partnered with the American Chestnut Foundation in an effort to help restore the neighborhood’s namesake to its former glory. As part of that partnership, SCH officially dedicated an on-campus grove for planting 70 blight-resistant American chestnuts on Friday, Sept. 13.

Since the early 1900s, a large number of American chestnuts have been wiped out by a pathogenic fungus known as chestnut blight. Originating in southeast Asia, the trees had little resistance to the disease when it was brought to North America, leading to millions of them being wiped out.

Though they remain endangered, billions of trees have been eliminated over the past century, and the USDA declared them “functionally extinct” by 1950. This was a huge blow to a species that has had a significant ecologic and economic impact on the country.

With approximately four billion American chestnuts in existence at its peak, the tree has made a significant mark on North American ecology through quantity alone. Additionally, its chestnuts have been a valuable food source, and at its peak in 1907 its lumber was valued at $22 million for the year, which equates to over $3 billion today.

The idea of bringing the restoration effort to SCH was first brought up about two years ago by Sally Quale, a former member of the Springside School board of trustees. Though it was after Springside had merged with Chestnut Hill Academy, and she was no longer on the board, Quale introduced former board chair Dick Hayne to the ACF, which began the planning for this partnership.

Both the ACF and SCH recognize the importance of restoring the American chestnut to its former glory. While both organizations plan to plant more trees on the campus in future years, this first round is focused less on the restoration efforts and more on being integrated into SCH’s curriculum for educational purposes. 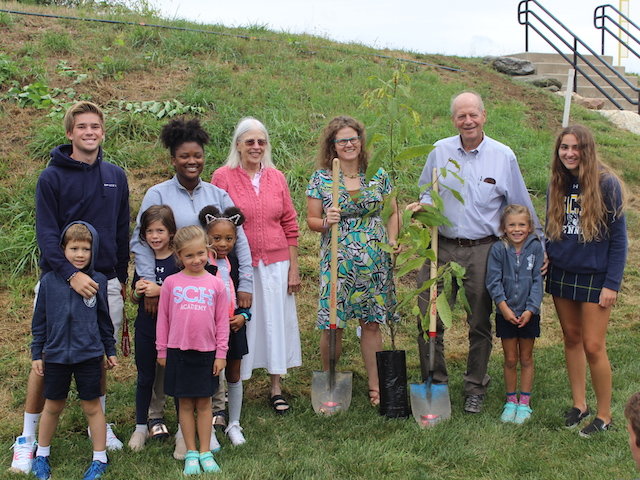 Present for the ceremonial planting of American Chestnut trees at Springside were: (Kids in front, from left) Joseph Dybas, Bea Hager, Annie Cooper, and Aubri Capers; (In the back row, from left) Charlie Larkin, Aja'nae Hall-Callway, alumna Sally Quale, who helped spearhead the initiative, Sara Fitzsimmons, Director of Restoration at the American Chestnut Foundation, former Board Chair Dick Hayne, his granddaughter Dorie Hayne and Emma Schwenderman.[/caption]

“When we met last fall, Lisa [Thompson, ACF president] and I presented a few different options of types of plantings that we do,” said Sara Fitzsimmons, director of restoration for the ACF. “This one is what we call a ‘demonstration and education orchard,’ and It's a little different because it's not exclusively for breeding or for creating blight-resistant American chestnuts. It comes from more of an educational standpoint, which is why we're integrating it into the curriculum.”

Given the ways in which SCH integrates the neighboring Wissahickon Valley area into its regular science lessons, the American chestnuts should fit right in with the school’s science program. Faculty members will meet in the winter to decide specifically how students will be involved, but they do anticipate that all grades will be involved in studying these trees in some capacity.

“Our science program is really strong,” said Frank Aloise, chief financial officer at SCH. “The kids start in pre-K going into the woods doing research, and we have teachers in the Lower School tapping maple trees, making pancakes from acorn flour, so it’s all the way through the curriculum. Scott Stein has also been taking water samples out of the Wissahickon and reporting those to the EPA for, I think now, 30 years. We have an incredible history of doing this kind of work and a really great department, so I think there's a unique opportunity for SCH to partner and be a leader in this.”

SCH is ultimately one of many partners the ACF works with in the eastern U.S. While the group does plenty of work on its own, Fitzsimmons also acknowledged how they rely on the work of citizen scientists like Quale to push the restoration effort forward. Beyond getting other organizations involved, individuals can also use the TreeSnap app on their smartphones to identify various types of trees across the country. Scientists then able to use that data to locate new trees for various types of research projects.

“There are plenty of people who don't necessarily have a background in biological sciences or forestry, but they just get struck by the connection of nature, place and history,” Fitzsimmons said. “It’s such a multidisciplinary story, from history, science, art, food and more. … The story is inspirational to all different generations.”

Visit ACF.org or SCH.org for more information. You can also download the Tree Snap app for free on Apple and Android devices. Brendan Sample can be reached at brendan@chestnuthilllocal.com or 215-248-8819.

Friends of Pastorius Park joins local efforts to bring the American Chestnut back to Chestnut Hill
Back to Nature: Chestnuts in Chestnut Hill?